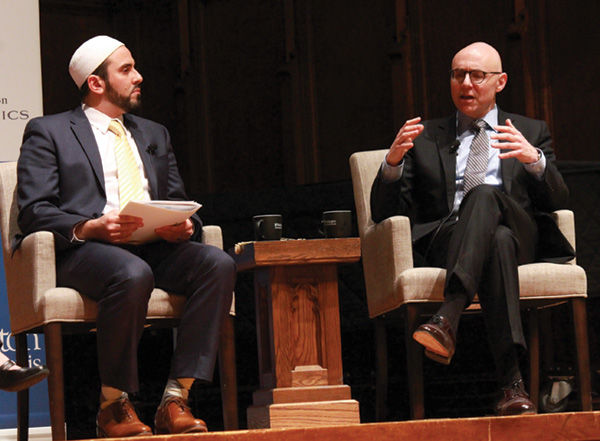 More than 200 people gathered March 8 at Graham Chapel at Washington University to hear Andrew Rehfeld, president and CEO of Jewish Federation of St. Louis, and Tarek El Messidi, founding director of Celebrate Mercy, a Muslim advocacy organization, discuss the response to the cemetery vandalism and how the Jewish and Muslim communities can continue to work together. The two organizations raised several hundred thousand dollars to help Chesed Shel Emeth Jewish cemetery make repairs to the 154 damaged headstones and upgrade its security. Photo: Eric Berger

Andrew Rehfeld, president and CEO of the Jewish Federation of St. Louis, did not initially publicly thank the Muslim organization that raised funds to help repair a local Jewish cemetery because he and others had not yet been able to verify that the campaign was legitimate, he said during an event with a Muslim activist March 8 at Washington University.

It had nothing to do with the fact that it was a Muslim campaign, as some people suspected. It was just that sometimes in crisis fundraising, people create false charities, Rehfeld said.

The effort was legitimate, and the morning after the panel discussion at Graham Memorial Chapel, Tarek El-Messidi, who organized the campaign, delivered a $40,000 check to Chesed Shel Emeth Cemetery in University City, where 154 headstones were vandalized last month.

The campaign has raised $160,000 and the remainder of the money will be used to help in repairs at a vandalized Jewish cemetery in Philadelphia and to upgrade security around the burial grounds of these cemeteries and other Jewish institutions.

The lack of immediate acknowledgement about the Muslim fundraising campaign proved to be a relatively small matter, and there has been much goodwill between the Jewish and Muslim communities amid continued bomb threats against Jewish community centers and the destruction of mosques and Jewish cemeteries around the country.

The focus of the panel discussion, which was sponsored by the Danforth Center on Religion and Politics, was on how to build lasting cooperation among American Jews and Muslims independent of crises.

“I don’t want to see this die down, I don’t want to see this beautiful moment of collaboration go away,” said El-Messidi, founding director of Celebrate Mercy, a Muslim advocacy organization. “Let’s say, God forbid, that there’s another huge escalation overseas (in) Israel-Palestine, I hope that (we can) have honest dialogue because of the trust that we are building now.”

An interfaith vigil at Chesed Shel Emeth after the vandalism was attended by Missouri Gov. Eric Greitens, Vice President Mike Pence, and more than 1,000 people, one of a number of such interfaith gatherings in recent years. After terrorists affiliated with ISIS killed 130 people in Paris in November 2015, Christian, Jewish and Muslim clergy gathered for a service at Eden Theological Seminary in Webster Groves.

And for the past six years, Jews and Muslims have volunteered together on Christmas at locations throughout St. Louis.  But is it possible to build deeper, wider partnerships rather than just at periodic events?

“How do you build that trust, because it seems that the relationships we have between the Muslim, Christian and Jewish communities are delicate because we are also grappling with real geopolitical issues that affect people,” such as wars and Israeli settlements, said Mohamed Gabir, president of Muslim Student Association at Washington University, who was one of about 200 people in the audience.

Rehfeld suggested “starting with a meal before you begin that dialogue (on the Israeli-Palestinian conflict). Start with something where you are put face to face with the other.”

El-Messidi organized the cemetery fundraising campaign with Linda Sarsour, a Muslim-American activist who has criticized Israel and expressed support for the Boycott, Divestment and Sanctions movement. There were some people in the Jewish community who would not publicly thank Sarsour for the campaign because of her actions toward Israel, Rehfeld said.

El-Messidi suggested that the two faith groups could focus on domestic issues, where “we have so much in common,” and said that work could translate to peace abroad.

But in the United States, Muslims, Jews and other opponents of President Donald Trump have expressed concern about how he and his administration treat the two faith groups. El-Messidi contrasted Trump’s travel ban and talk of “radical Islamic terrorists” with President George W. Bush, who after 9/11 said of Islam, “Its teachings are good and peaceful, and those who commit evil in the name of Allah blaspheme the name of Allah.”

Rehfeld said Trump’s delay in condemning anti-Semitic attacks has created problems for the Jewish community. Rehfeld said he heard little condemnation from the administration until he heard it directly from Pence at the interfaith vigil at Chesed Shel Emeth. Rehfeld, Pence and others stood in the back of a pickup to speak to those gathered. Rehfeld said he also heard criticism because he appeared with Pence. But he said he wondered what the response would have been if he had turned down the vice president.

Rather than focus on the often toxic rhetoric, Rehfeld said, “don’t demonize the other and more importantly, don’t fall prey to the demonization of the other.”

El-Messidi spoke about enjoying kosher meat and the commonalities between the two religions. He suggested that a synagogue could host a meal during Ramadan, the month in which Muslims fast from sunrise to sunset, or that a mosque could host a meal after a Jewish fast day.

He said other people have suggested that they start a joint fund to combat Islamophobia and anti-Semitism.

After an arsonist caused damage at a mosque in Florida on Feb. 24, a campaign to help with repairs started to receive donations in multiples of 18, the number represented by the Hebrew letters in the word chai (life), and is meant to wish the recipient a good life. El-Messidi said he did not initially know the significance of that number.

“We’re starting to see reciprocation,” said El-Messidi, who lives in Philadelphia and has received emails from Jewish donors asking how they can help. “There was no expectation of reciprocation.”

Myra Ekram, 19, a student at Maryville University, attended the panel discussion with a friend from her mosque in Ballwin. She also attended the cemetery cleanup. Participating in such events, she said, “can open people’s eyes who only saw the conflict between Muslims and Jews. … To see people at the cemetery, (it

showed) that it’s not just about religion, it was kind of just a big family thing.”

“From my participation with interfaith work, we have always talked about the benefits of collaboration, but people haven’t really been fully honest about the barriers that there are,” Hashimi said.

She said that in interfaith work, the Israeli-Palestinian conflict is an issue that “people don’t want to bring up, and I appreciated them addressing that and showing ways to collaborate in spite of those elephants in the room.”