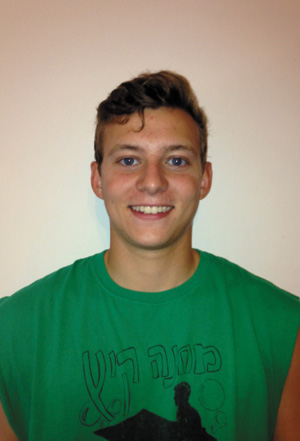 Liza Levko, 22, says she didn’t feel ready to go off to college the fall after she graduated from high school. She wanted a year to explore the world and “figure out what I wanted to do with my life.”

Levko’s parents completely understood. “I didn’t feel Liza was ready to go to college,” said her mother, Susan Levko.  “This was a chance for her to be away from home for 10 months to mature, grow and learn about life.”

So the August after her 2009 graduation from Lafayette High School, Levko took a “gap year” and spent it in Israel through the Nativ Leadership program. She traveled around Israel for 10 months, taking classes in religious studies, performing various service projects and working in an Israeli kitchen where her co-workers spoke to her only in Hebrew and she spoke to them only in English.  This mutually beneficial experience helped her become almost fluent in Hebrew.

A gap year has become a solid option for teens looking to mature, prosper and broaden their horizons after high school.  The number of Jewish teenagers in the United States taking a gap year in Israel before going to college is on the rise according to Masa Israel, an organization that helps young adults find study abroad, internship and volunteer opportunities in the Jewish State. It has more than 200 programs available, ranging from ones that are academically rigorous to others that prepare its participants for the Israeli military.

David Iken, a recent graduate of Clayton High School, will be starting his gap year in August through the Oratya program in Jerusalem.  This program puts a strong emphasis on Jewish studies, but besides studying the Torah and other Jewish scholarly texts, he will take classes in philosophy and further develop his leadership skills. “What people don’t realize is that there is a program for everyone,” Iken said. Both his and Levko’s programs attract mostly American students, and both said they knew many people participating in the programs before they joined them.

Other programs, such as the Mechinat Telem program that Ladue Horton Watkins graduate Hannah Barg went on in 2009, differ in terms of who participates.  In the Telem program, Barg was the only American who went and she was completely immersed in the Israeli culture.  Her program was all about exposure to Israel, and her perspective as the only American was critical to her fellow Israeli participants.  Adi Shenhav, a graduate of Parkway Central High School, is doing a program called the Upper Galilee Leadership Institute in August.  Like Barg, he will also be one of the only Americans participating.  Shenhav will develop his leadership skills in the program while preparing mentally and physically for military service, although he isn’t actually planning to enter the Israeli military.

Local teens who participated in gap year programs said they came to better understand their Jewish heritage.  “Religiously you have to push yourself,” Barg said. “I realized there are more options than what I had been exposed to, and being there got me away from what I had always known.”

Taking a gap year in Israel is not only a time of spiritual growth, but it also can give participants the freedom to make their own paths in life.  Levko praised her experience, saying, “You felt like you were going to a place you had heard about so much from the Torah.  It was an eye-opening experience. Religiously it definitely helped me realize my connection to Judaism.  I want my life to be meaningful and have a purpose.”

Besides growing spiritually, these teenagers also matured.  “By the end, I felt like I could stand on my own two feet and emotionally rely on myself,” Levko said. “It’s a lot about experiencing things, just going out and doing them,” Barg added.  Both young women described their time abroad as “life-changing,” saying it helped them decide what they wanted to study in college.  Levko is majoring in international relations and Barg is studying anthropology.  “Having the experience of walking into another culture strengthened my love for anthropology,” Barg said.

Levko’s mother also saw critical changes in her daughter’s maturity and confidence levels compared to her peers.  “Liza felt like she was more mature than other college students who didn’t take a gap year.  She knows her Judaism and where she comes from,” Susan Levko said.

Others just wanted to experience the country that they have learned so much about first hand.  Shenhav lived in Israel until he was 4 years old, and was encouraged by his family to return to experience his home country. “I just have always wanted to live in Israel” he said. “That’s it.”  He has done camps and trips to Israel, but he believes being there for an entire year will be a completely different experience, one that he can learn and grow from before heading to Kansas University.

Susan Levko said gap-year programs generally cost a bit more than in-state college tuition, “at least when Liza was doing it,” adding, “it was somewhere between $20,000 to $25,000.” The prices today haven’t changed much, but they do fluctuate depending on the program.  There is also a multitude of scholarships and grants available for participants if they apply.  Some organizations even have fundraisers to raise money towards the participant’s tuition.

Gap-year participants believe that taking a gap year is better than studying abroad or other programs that colleges offer.  “When you take gap year and return to the country you will never be a tourist again,” Levko said.  Through these programs, real connections to Israel are formed and that is one reason there has been an increase in American programs.  “Colleges don’t mind, they even encourage students to take a year off before college,” Iken said.  “It’s a break from traditional schoolwork and the year before college is really the best time to go.”

Levko and Barg had a word of advice to Jewish teens going on gap year: try absolutely everything.  “It is all about breaking out and trying new things,” Barg said.  While she was in Israel she tried her best to be exposed to something new each day to get the most out of her experience.  “Just take advantage,” Levko added to Barg’s advice, “do everything you want to do and never say no.”  The friendships made during those experiences will last a lifetime and both young women still keep in touch with members of their group.

For more information about gap year programs in Israel, go to massaisrael.org.