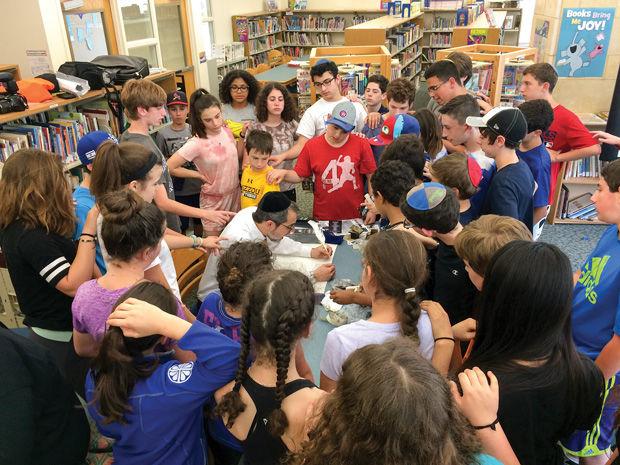 The Jewish Student Union is working to create a new Torah aimed specifically at the youth of St. Louis as part of its mission to bring together Jews from all streams of the faith.

“We may approach the Torah differently but that’s the only constant that we all share as a community,” said Rabbi Michael Rovinsky. “It’s the glue and the thread that binds us together.”

Announced at a recent gala event for the organization, the Torah will be fully underwritten by philanthropist Gloria Feldman in honor of her two brothers and all the children lost in the Holocaust. JSU also has a fundraising campaign associated with the project with money going to programmatic and scholarship needs for the group.

“The mission of JSU is to find and reach unengaged and underengaged teens, show them the relevance of Judaism to their everyday lives and inspire them to reengage with the Jewish community,” said Rovinsky.

The Torah will be inscribed mostly in Jerusalem. However, there will be opportunities for St. Louisans to fill in letters. Letters can also be sponsored.

Upon completion, the holy document will be made available to Jewish youth groups or organizations in the area. Some of that process will get underway even before the scroll is done.

“JSU staff and a local scribe will be made available free of charge to every Jewish institution that works with children from preschool all the way up through college and we will come and do an age-appropriate presentation on how a Torah is written and actually write part of the Torah with them to give them a chance to participate in this mitzvah,” he said.

Rovinsky said that JSU is happy to have this opportunity.

“We’re not about Reform, Conservative or Orthodox,” he said. “We’re about Jewish engagement. We’re about tearing down silos.”

He said the gala event in March brought in about $65,000-$70,000. The process of Torah inscription actually began in November of last year with completion expected sometime between August and October.

Michael Rauchman, chairman of the advisory board of the local JSU, said it was the first time that the group had sponsored a Torah.

“It is a big undertaking which we are privileged and excited to take on,” he said. “We think it is a great thing for the community. Our goal is really to unite the Jewish community, to reach out to teens of all denominations and bring them together around what all Jews share in common. What better way to symbolize that than with the Torah?”

JSU member Noa Hahn, 16, said the organization has done a great deal to improve her Jewish knowledge base and she looks forward to seeing the new scroll.

“It seems like a really cool experience, especially since teenagers are going to be able to help write the Torah,” said the Ladue Horton Watkins High School sophomore. “I’m excited to learn more about it.”

She thinks that the process could be very helpful to young people in their Jewish journey.

“The level at which people practice and observe Judaism is different for each person but I hope that the Torah can help people learn about their own Jewish identities,” she said. “If they help in writing it, maybe they can learn something about themselves.”

Sarah Goldblum, a 19-year-old special education major at Bradley University, traveled back to St. Louis from Peoria to attend the gala. She didn’t know about the new Torah at the time since it had not yet been made public but she was enthused to learn about it.

“I think it is amazing,” said the former JSU officer who was a part of the group in high school. “I feel like unity and inclusivity is very important for the Jewish community because a lot of times, we’re so divided on what branch of Judaism we are and what labels we can define ourselves with.”

She thinks making a physical Torah can provide a centerpiece for Jewish engagement.

“We’ve always had the idea to spend time together and do things together but an actual object is what really can get things done,” she noted. “I’m really proud to be a part of JSU as an alumni to watch this happen.”

The “Torah of Unity” campaign on the JSU website stood at $98,600 on Monday morning. To learn more about the Torah and sponsorship opportunities, visit http://jsustl.org/overview-torah-of-unity-campaign or email [email protected]