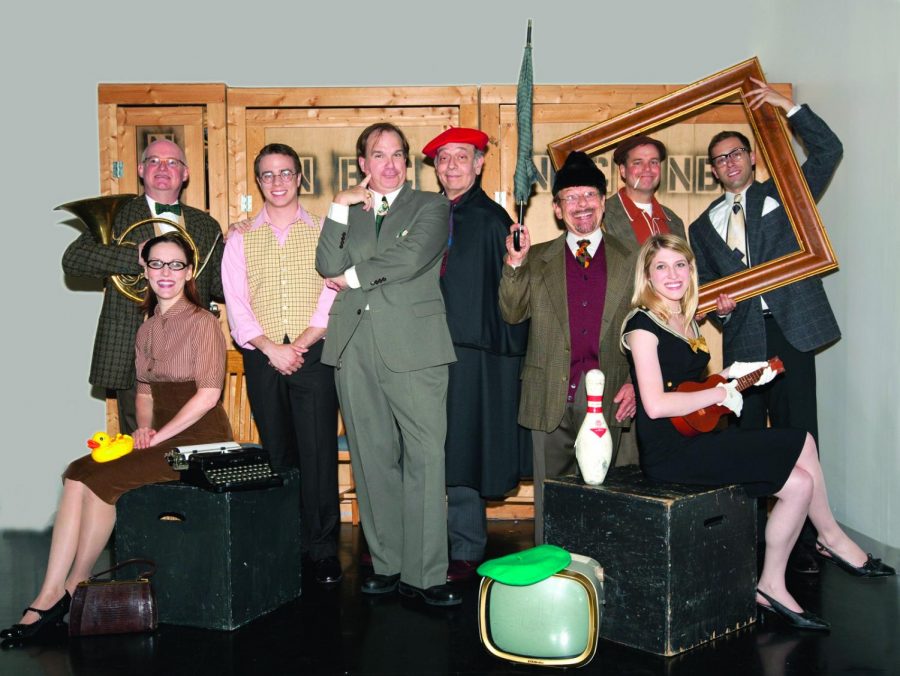 New Jewish Theatre will revisit Neill Simon's "Laughter on the 23rd Floor" for the opening of its 2022 season. Above: A photo of the cast of NJT's 2010 production of the play. (John Lamb)

The New Jewish Theatre will open its 2022 season Jan. 19 with Neil Simon’s “Laughter on the 23rd Floor.” It will kick off NJT’s five-show season, with Artistic Director Edward Coffield directing.

“I am thrilled to continue the tradition of excellent theater at the J,” said Coffield. “I believe this season will engage and excite the community.”

NJT, which is a program of the Jewish Community Center, returns to production after an unprecedented 20-month hiatus caused by the COVID-19 pandemic. Its 24th season also includes “Every Brilliant Thing” by Duncan Macmillan and Jonny Donahoe in March; Ken Ludwig’s love letter to his grandparents, “Dear Jack, Dear Louise” in June; and the world premiere of “The Bee Play” by Elizabeth Savage in September.

The year-long season concludes in December with the musical celebration of the great Jewish composer Jerry Herman when it presents “Jerry’s Girls,” featuring some of the best music written by the Broadway legend.

Season subscriptions are $225.00 – $245.00. Subscription packages are available as a classic five-show package or the popular Flex Pass, which allocates six passes to be used in any combination at the patron’s discretion. Subscriptions go on sale Sept. 27. Single tickets will be available in early December. Tickets may be purchased at the NJT box office, by phone at 314-442-3283 or online at newjewishtheatre.org

Inspired by the playwright’s youthful experience as a staff writer on Sid Caesar’s “Your Show of Shows,” this Neil Simon favorite depicts the harried writing staff as they frantically scramble to top each other’s gags while competing for the attention of star madman Max Prince. Classic Catskill’s humor mingled with colorful characters, “Laughter on the 23rd Floor” promises to do just that – make you laugh, though likely on ground level.

“Every Brilliant Thing” by Duncan MacMillian with Jonny Donahoe

This one-man show focuses on a son trying to support his mother through her depression, but does it with a heart-warming, and off-times times, humorous narrative. The play compels us to fight our challenging times by practicing gratitude. Make a list of all in life that’s brilliant — all of it. This play celebrates the challenging times and the power we must have to survive them.

When two strangers meet by letter during World War II, a love story begins. U.S. Army Captain Jack Ludwig, a military doctor stationed in Oregon, begins writing to Louise Rabiner, an aspiring actress and dancer in New York City, hoping to meet her someday if the war will allow. But as the war continues, it threatens to end their relationship before it even starts. Tony Award-winning playwright Ken Ludwig (“Baskerville: A Sherlock Holmes Mystery,” “Lend Me a Tenor”) tells the joyous, heartwarming story of his parents’ courtship during the war and the unexpected results.

“The Bee Play” by Elizabeth Savage

Beekeeper Carver Washington, 18, finds respite from caring for his sister and grandmother by escaping to his rooftop beehives. This urban Garden of Eden provides him solace from chaos in the world. After a chance meeting, he strikes up a friendship with Devora, a kindred spirit who has set up an urban kibbutz. Their conversations lead them to share their dreams, fears and hopes during a time of colony collapse; both for bees and humans. This new play asks what forgiveness might look like in the 21st century.

Directed and choreographed by Ellen Isom

Who doesn’t enjoy a frolicking musical revue with familiar tunes that make you want to singalong? “Jerry’s Girls” is an all-female cabaret-style revue built around the songs of Jewish composer/lyricist Jerry Herman – the creator of “Hello, Dolly!” “Mame” and “La Cage aux Folles” among many others. A performance of many of Herman’s greatest songs, a true celebration of Broadway.