NASCAR and the Jews. Please join me in following the sport as it comes to St. Louis 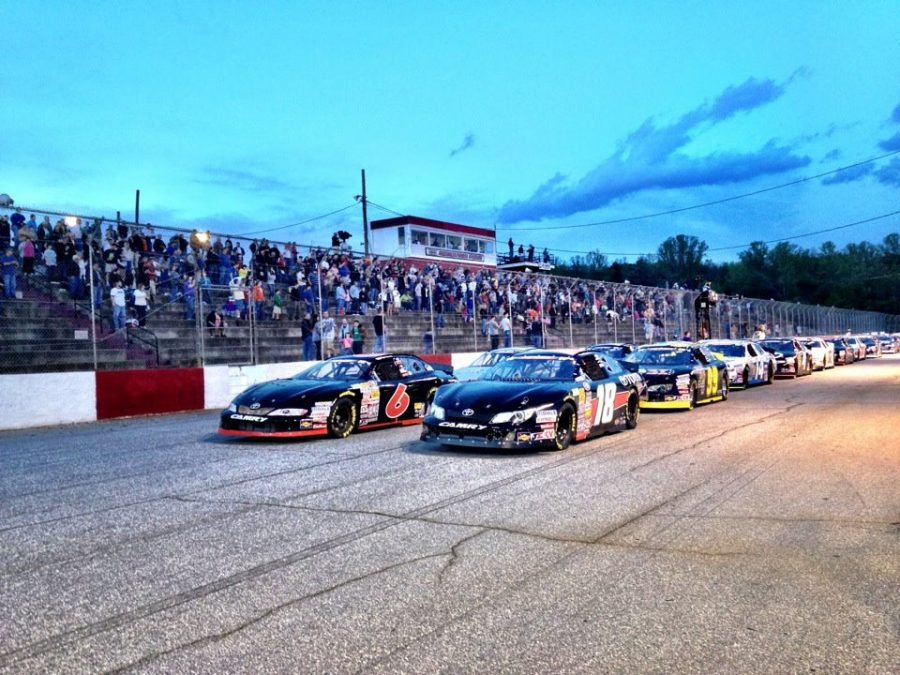 For some reason, NASCAR racing has never been a popular sport for the Jewish people. While kosher food and minyans (prayer groups) are common at many baseball, football, and basketball games around the country, one would be hard-pressed to locate the same at a NASCAR race.

That breaks my heart, and I’ll explain why in just a second, but the reason for selling you on NASCAR is the fact that NASCAR has announced that it is finally coming to World Wide Technology Raceway near St. Louis, and will join the Cup Series schedule in 2022. The news, announced by NASCAR and track officials last Wednesday morning, marks the culmination of track owner Curtis Francois’ vision for the facility he has revitalized during the last decade.

And as my friend Tom Ackerman made quite clear on Facebook, this is a big deal for our hometown of St. Louis.

Why Do I/ You Should Care
In July 2019, as the pandemic kept us all inside, my son Max and I began to look for more sports we could enjoy on TV and gave NASCAR a chance. This was literally the same week that the sport made national news for all the wrong reasons when NASCAR released a photo of a noose that was found in the Talladega Superspeedway garage stall assigned to Darrell “Bubba” Wallace Jr., the lone black driver in NASCAR’s premier series.

“As you can see from the photo, the noose was real, as was our concern for Bubba,” Steve Phelps, the president of NASCAR, using Wallace’s nickname, told reporters in a telephone news conference.

The response was immense, as all drivers supported Wallace.

NASCAR drivers stood behind racer Bubba Wallace presenting a unified front just ahead of the rain-delayed Geico 500 at Talladega Superspeedway in Alabama.

Together, the drivers all gathered on Pit Row to show their solidarity like no other sport ever has, in fact, the display was so impressive when you consider how MLB players responded to Curt Flood, or the NFL responded to Colin Kaepernick.

Inspired by this gesture, we decided to attend the 2020 Bommarito Automotive Group 500 weekend out at World Wide Technology Raceway. We went for two full days and caught the Formula 1 racers, the NASCAR Truck race, and basically, aside from Max’s sunburn, and the best weekend in a long time.

At the core of the weekend, I did feel like we were the only Jews in the venue, and that felt sad considering I know a lot of Jewish people who enjoy cars and driving fast.

Short of Ricky Bobby (Will Ferrell) converting to Judaism in the Talladega Nights sequel, I fear NASCAR will ever become a popular sport for the Jews.  Maybe the following will make you think about NASCAR differently, and perhaps join me at the track next year. When I go, I’ll be there representing my Judaism, my support of my hometown, my support of sport in general, and my support of enjoying life. I hope you’ll agree.

This past June, Seth Eggert a Jewish Staff Writer for the site KickinTheTires.net wrote the following. Give this a solid read, and then I hope you’ll join me in supporting the athletes who support you. Yes, support you.
A little over one year ago, NASCAR took the step that I’ve been longing for years, a step towards a more accepting, compassionate, diverse, and understanding fan base. To understand why I’ve been longing for that change, I first have to explain how I got here.

Long before I joined the ranks of the NASCAR Media Corps, I was much like most other race fans. However, there was a difference. My family and I are Jewish. Aside from Alon Day’s sporadic starts in NASCAR’s National Series, I honestly don’t remember the last time that someone like me competed in NASCAR in the U.S.

Bad experiences at the track in 2013 and 2015 almost drove me, a Jewish NASCAR fan, away from the sport. Since 2015, I have not worn my Star of David necklace, passed down from my grandfather who was a Holocaust survivor and a NASCAR fan, to the race track.

I’ve talked about these experiences briefly on Twitter, the Drafting the Circuits Podcast, and Motorsports Madness in the past. However, I’ve never put the pen to paper in actually documenting them. Even as I was writing this story, I was hesitant to publicly state my experiences.
2013
In 2013, at a NASCAR Camping World Truck Series event I went to the restroom and then went to grab some food during the pre-race. I had taken the Star of David necklace off while in the restroom to apply sunscreen. When I put it back on, I didn’t tuck it back under my shirt, didn’t think anything of it. Leaving the restroom, I took my wallet out, only for another fan to start yelling at me.

“Hey did you just pick up a $20 bill from behind that trash can?” the fan yelled.

Confused, I looked at and behind the trash can and apologized, saying that I didn’t see anything.

What happened next was the first personal experience with discrimination, anywhere.

“Let’s see what security has to say about this. Just give me the $20, you people are made of money.” At that point, I realized what was happening. I did my best to side-step this ‘fan,’ but he just backed me up into the entrance of the restroom. Feeling threatened, afraid, scared, I gave him $20 out of my wallet. I heard him cackling in the restroom as I stood there in shock.

I never reported it. Didn’t know the fan’s name. A description of a fan in a baseball cap, sunglasses, and a shirt of a fan-favorite driver wouldn’t have done any good. At that point, it was a needle in a 12,000 fan haystack. Embarrassed, I put the event behind me and never talked about it until 2016.
2015
A couple of years later, at a different venue, I experienced the single-most terrifying moment I have had to date. Following the pre-race invocation, while everyone around me said ‘Amen,’ I said ‘Shalom.’ It wasn’t the first time I’ve done that. My family and I had done that every race we had attended that I can remember.

Drenched in beer, I turned around. Some other fans also turned to look. A few rows up, a group of four fans began shouting derogatory epitaphs at me. After I watched another beer get thrown at me, which missed and landed in an empty seat two rows down, I packed my gear up and started walking.

Walking up the steps, I saw a couple of the ‘fans’ that had been hurling the beers and epitaphs at me point in my direction. Two of them began heading towards the opposite end of their row. I had an idea of where I was going, but now, I thought I was being followed.

I ducked in and out of restrooms as I worked my way from my seat in Turn 1 to the start-finish line. Luckily, this race had been rained out the night before and there were plenty of empty seats. Around lap 30, I finally grabbed a seat near where I knew that one of my father’s friends sat.

Like in 2013 before, I didn’t report it. Although this time I knew exactly who had been attacking me, I was afraid, ashamed, and embarrassed. I thought of my sister who had been beaten in middle school because we’re Jewish, despite multiple attempts to bring her issues to the school. I thought of my grandparents, both Holocaust survivors. There was so much going through my head that I don’t remember much of what happened in that race.

So, I just didn’t talk about it. When I came forward about these experiences there were some fans that attacked me. On Facebook and Twitter, fans commented negatively with, ‘that didn’t happen,’ ‘it never would have happened to me,’ ‘if it happened, why didn’t you come forward sooner,’ among other comments and memes.
Renewing my Love of NASCAR
The year 2015 was a year of change for me. As I explained, I got to experience some of the worst that there was. Earlier in the year, my work with iRacingNews covering the iRacing IndyCar Series came to an end. A three-month stint as a ‘developmental journalist’ with the defunct-Popular Speed resulted in just one article and a lot of soul-searching.

I wasn’t sure what I wanted to do, I was heading into my last semester of college for a degree in history. At that point, I thought my time in the NASCAR community, 20 years at that point, was coming to an end.

Then, I stumbled across a Facebook post advertising a job as a writer covering NASCAR. On a whim, and advice from my parents, I replied. By the 2016 Daytona 500, I was writing for Motorsports Tribune. Through them, Short Track Scene, and friends such as Speed Sport’s Jacob Seelman, TSJ Sports’ Peter Stratta and Noah Lewis, I fell back in love with NASCAR. I also became a much better-rounded writer, although I admittedly still have some hiccups every now and then.

I parlayed my experience at Motorsports Tribune into an opportunity as the Staff Writer and eSports Editor for Kickin’ the Tires, where you are reading this article.
Josh Reaume’s Suspension
On Nov. 10, 2020, I, along with many in the industry learned of Josh Reaume’s suspension after he made an anti-Semitic post on social media. The anti-Semitic post was a photo of a swastika. Kickin’ the Tires editor Jerry Jordan broke the news eight months ago. NASCAR rightfully suspended Reaume until he completed sensitivity training.

It was frustrating, infuriating, and quite frankly, it made me angry. Again, both of my grandparents are Holocaust survivors. My grandfather survived Auschwitz-Birkenau; my grandmother survived Bergen-Belsen. They were two of nine family members that survived the Holocaust. In total, 70 family members were imprisoned in the Concentration Camps.

I withheld the urge to go into an expletive-filled rant on social media and on various podcasts and radio shows I was invited onto in the wake of the incident. I know I am better than that, but it brought back the memories of my negative fan experiences, which I had mostly suppressed, to the forefront.

Since then, Reaume completed his sensitivity training and has been reinstated by NASCAR.
Inclusion Today
A year ago, NASCAR banned the Confederate battle flag from its properties, tracks, etc. They also partnered with various organizations such as the Urban Youth Racing School, the Trevor Project, the Women’s Sports Foundation, UnidosUS and several Historically Black Colleges and Universities (HBCU) among other organizations. Each of these steps has opened the flood gates to potential new race fans.