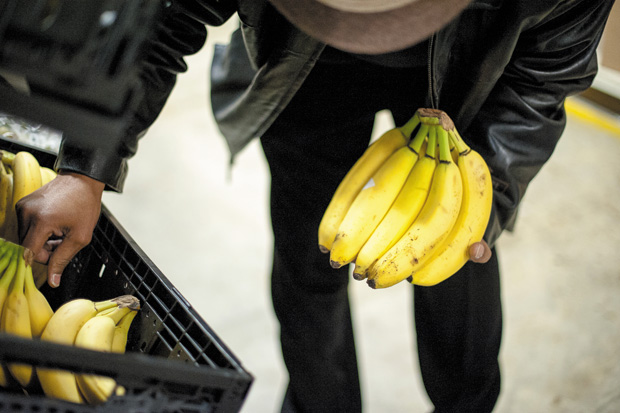 In the old Harvey Kornblum Jewish Food Pantry’s space, Don Meissner remembers wrestling a ton of canned food onto a pallet into the basement was a complicated, time-consuming operation. It took about six man-hours, he said, jammed up the hall and elevator, and generally made things difficult for other people in the building.

“In the old place, we had to drop the pallet on the ground, then use a jack to get it through the door,” said Meissner, community outreach coordinator for the pantry. “Then we had to move it through the hallway and maneuver it onto the passenger elevator. Then down the elevator to the basement. Then we’d put it on a non-powered pallet jack to haul it to where we kept the USDA food.”

What a difference a move makes.

At the new food pantry, less than a mile east of the home it had shared with Jewish Family & Children’s Service in the Allan R. Hoffman building at 10950 Schuetz Road, there’s more than five times as much space for a warehouse, an area where volunteers sort donated food and a space to let clients choose the food they need.

No longer will they be handed bags of food that volunteers have chosen for them, according to pantry guidelines as to what makes up a balanced diet to last seven to 10 days.

In retrospect, that might have seem to be a little patronizing, giving hungry people what the pantry workers thought they needed for good nutrition.

Now they will be able to pick among racks of canned and boxed food and such perishables as fresh fruit and vegetables. The storage area somewhat resembles a big-box warehouse retail food store with rack after rack of boxes and canned vegetables and fruit.

There was even a stack of bags of dog food.

“People have dogs, too,” Meisser said.

Of course, there’s a kosher section. And it’s all on one floor.

“Now we can just back up the trucks and drop it off,” said Meissner, who turned to pick up four large transparent plastic bags bulging with fresh bread that a volunteer had picked up from a retail store and driven to the food pantry at 10601 Baur Boulevard. There, she took the bags from the car’s trunk and set them outside the loading dock door.

That’s the way some of the food gets to the pantry, for volunteers to organize and put out into an area where clients pushing grocery carts can choose from non-perishable foods, fresh vegetables and fruit and cold stored meats.

Meissner explained that some retail shops are very specific about when they want volunteers to pick up their cast-off fresh bread and pastries.

Other food comes from two U.S. Department of Agriculture programs to be given to clients who are eligible under federal guidelines. These are the Food Assistance Program and the Commodities Supplemental Food Program.

Bringing in pallets of canned foods from the central warehouse in Earth City was the cause of all that fuss and confusion in the old food pantry operation.

Still more food comes in from schools, civic groups and synagogues, which have food drives, as many do around High Holy Days.

And every Monday and Wednesday, Meissner said, some of the staff heads to Produce Row in one of three panel vans the pantry owns to pick up fruit and vegetables that are overstock or getting ripe.

All told, the pantry now has the capability to store, sort and hand out about 90,000 – 45 tons – of food at any time because it has so much more space, said Jim Bularzik, the pantry’s inventory control specialist.

“I have a small budget so I can buy food to balance our inventory,” Bularzik said.

In fact, space is so ample that the pantry is looking for someone to rent 5,000 square feet until that area is needed for the pantry’s operations, said Fred Steinbach, former president of the JCFS board who has been involved in establishing the pantry at its new location.

Storage space was one of the essential requirements for the pantry when it opened in its new space on Dec. 10 after being closed for a few days while volunteers helped to move the inventory and office equipment.

Another requirement was suitable walk-in cold storage for frozen and perishable foods.

“Brand spanking new ones,” said Meissner, were donated to the pantry.

“We get food from virtually every food retailer and wholesaler in the area,” Meissner said as he led a reporter on a tour of the 21,000 square foot building. It was recently renovated at a cost of $400,000, plus $125,000 for a new roof. The rectangular building, whose long side lies parallel to Baur Road, cost $885,000.

While the building had another life as a light-industry factory, its reincarnation as the Jewish community’s food pantry means it will be able to serve more than 4,000 people a month. And it has room to grow, if needed.

The sluggish economy and persistent unemployment, particularly in St. Louis City, whose residents the pantry serves, as well as those from St. Louis Country and the greater metro area, are seen as the driving factors for the increased demand for the pantry’s food.

The new layout, a more discrete area for screening clients and the way clients can choose their food – all are elements that follow a national model, Meissner said.

“It’s nicer for people to be able to shop,” he said. “It changes the feel of the operation.”