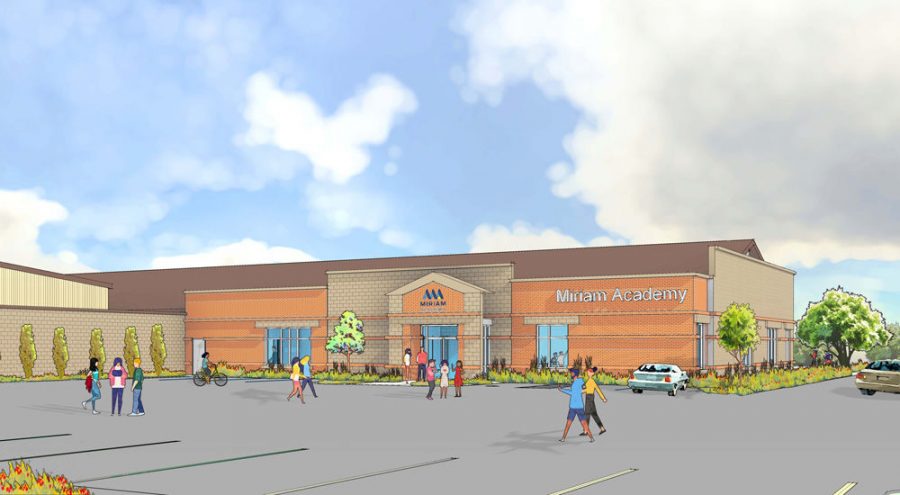 A rendering of the Miriam Academy after a $2 million renovation of the Epstein Hebrew Academy building. Images courtesy Miriam Foundation

After having to dribble around a series of unexpected obstacles, the leaders of Miriam Academy, a private high school for students with learning disabilities, are preparing to unveil a shiny new gymnasium floor in their new home.

The school is scheduled to hold a commencement ceremony for its 24 graduates later this month at the former H.F. Epstein Hebrew Academy building on Warson Road, which it purchased last year.

The ceremony will be the school’s first event in its new space and represents a triumph of sorts for a school that saw an earlier deal for a building collapse because of the surrounding township’s rejection of a rezoning proposal.

At the first proposed location, the former Congregation B’nai El property, “we would have had bigger issues,” said Andrew Thorp, executive director of the Miriam Foundation, which operates the school and has Jewish roots. “We would had to learn how to build a gym, let alone the political issues we would have had to deal with.”

Instead, the foundation recently started the public phase of an $8 million campaign supporting the purchase and renovation of the property. Miriam Foundation has $5 million committed to the campaign so far from lead donors. Miriam Academy is preparing to open its new building to students this fall, along with many other schools in St. Louis County.

A year ago, the foundation tried to purchase the former B’nai El property from Congregation Shaare Emeth, but the Village of Westwood trustees rejected an application to rezone the property, which effectively killed the deal.

Thorp and foundation leaders moved on to purchase the Epstein campus, while the Modern Orthodox school purchased a smaller building in University City.

On its new 8-acre property, Miriam Academy plans to use 38,000 square feet of the building and leave 20,000 square feet for a lessee to use. Given the nearby campus of the agribusiness corporation Bayer and the Danforth Plant Science Center, Thorp thinks it will be an attractive property.

“We think this is going to be valuable for someone and was a good investment for us,” Thorp said.

Miriam Academy had 63 students enrolled at its former high school; the current location has a capacity of 120 students and the foundation expects to be able to eventually fill it. The school, which opened in 2016 and will be graduating its first high school class, had shared space at Parkway United Church of Christ in Town and Country.

“When people know that we have a permanent location, I think our numbers will grow,” said Sue Jackson, head of school.

In addition to renovating the gymnasium, the foundation also paid for a new roof, three air conditioning units and renovations of offices and classrooms.

Aside from the renovations, the new building is an upgrade because the administrative offices will now all be in one location and the entire school is on one level rather than two levels. These changes make it easier for the student body, many of whom “have sensory issues and navigation issues,” Jackson said.

Thorp thinks the school could have a smaller enrollment for the coming school year because of the downturn in the economy due to the coronavirus pandemic.

“I think many independent schools are struggling with lower enrollment, but those that will survive are those that went into [the pandemic] in good shape, and I think we were in very good shape,” Thorp said.

Foundation leaders expect that school will be able to hold in-person classes in spite of the growing concerns about a second wave of the coronavirus.

What gives them the confidence that they will be able to open?