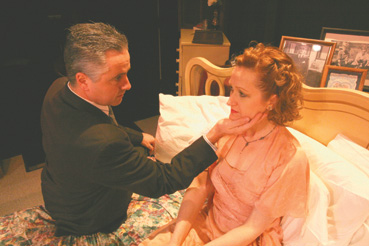 Arthur Miller, when he died in February 2005 at the age of 89, was hailed as one of the greatest dramatists of the 20th century, ranking with Tennessee Williams and Eugene O’Neill as the playwright who brought such classics as Death of a Salesman, A View From the Bridge and The Crucible to the stage. Best known for his acclaimed, Pulitzer Prize and Tony Award-winning classic Death of a Salesman (l949), Miller was often asked whether its protagonist, Willy Loman, the pitiful salesman of the title, his wife Linda and sons Biff and Happy were Jewish. Many critics and scholars noted the almost Yiddish cadence to much of the dialogue and saw major hints of Jewishness in the script, but no explicit references are to be found in the manuscript.

In various interviews, Miller would later confirm that “in his mind” Willy Loman was Jewish, but “from the particular you get the universal.”

There is no such ambiguity in Broken Glass, first produced in London in l994, and which has been brought to The New Jewish Theatre in a shattering production, tautly directed by Deanna Jent, and featuring excellent and credible performances by a fine cast. The NJT wanted to pay tribute to America’s greatest Jewish playwright, and wisely selected the most explicitly “Jewish” of his scores of plays. (Miller did the screeplay for the made-for-television film Playing for Time, based on the factual account of Fania Fenelon, a Jewish woman who led a classical musical ensemble at Auschwitz in order to be spared from death).

Be warned. Broken Glass, which derives its title from the Nazi rampage Kristallnacht of November 9-l0, l938, is an almost overwhelmingly somber piece, but considering the subject matter and theme, it could hardly have been otherwise. Phillip and Sylvia Gellburg (stunningly portrayed by Kevin Beyer and Lavonne Byers), are trapped in a 20-year marriage that long ago has been sapped of mutual love and romantic passion. Phillip, who insists on correcting people who mistakenly call him “Goldberg,” works in a Brooklyn mortgage company, owned by a clueless, wealthy Babbitt named Stanton Case, an aloof WASP who barely tolerates his Jewish broker as long as he is productive.

Sylvia, meanwhile, described as vibrant and intellectual, is deeply concerned over the shocking events unfolding in Nazi Germany, obsessively reading the daily accounts of the cruel torture of German Jews leading up to Crystal Night, the Night of the Broken Glass, or Kristallnacht, which in November l938 launched the physical phase of the Holocaust. Her husband Phillip, while deeply conscious of his Jewishness, is emotionally shut down and manifests considerable self-hatred, even blaming the German Jews for bringing on their own misfortune.

So helpless does Sylvia feel over the events in Europe, she becomes literally paralyzed with fear, losing her ability to walk, even though doctors can find no physical reason for her legs going limp. In interviews at the time of the play’s release, Miller said he based Sylvia on “a woman I knew as a teenager” who had suddenly become mysteriously paralyzed. He added, “What intrigued me in Broken Glass is the human animal’s capacity to create a fantasy — based on reality to be sure — so powerful as to paralyze an otherwise physically sound woman. She has made war against herself, and the trigger is what she reads in a newspaper, something she can’t possibly believe … In this play they are struggling with resignation all the time. Everyone in the play, including Gellburg (are) trying to find a way out of it, too.”

Sylvia’s only “bright spot” is her relationship with Dr. Harry Hyman (Bill Lynch, with just the right balance between professional competence and hedonistic egotism), the physician who attempts to treat her mysterious paralysis. Hyman’s wife, Margaret (Kari Ely, in an appropriately exuberant, but wise portrayal), had been a nurse when they became romantically involved, but his roving eye and lust for new “conquests” afflicts him. Phillip Gellburg and Dr. Harry Hyman present interesting contrasts in how one dealt with one’s Jewishness in Brooklyn in the l930s. For Gellburg, being Jewish was something to be mourned, yet endured. He is a totally “dark” person, even choosing to wear a black suit and black necktie as if to express his gloomy outlook on life. Both the job, which he tells his cold boss is “my whole life) and his wife, whom he says “I worship” reject him. Harry Hyman, meanwhile, is seemingly carefree and unburdened by his Jewishness. He impulsively married a sunnily cheerful non-Jewish woman, and he helps himself to the pleasures of available other women, including his patients.

Sylvia, alone is attempting to face the reality of what is happening to the Jews in Germany and fears to the point of paralysis that the Jews of Brooklyn will soon be forced to clean sidewalks with tooth brushes, just as the Jews of Berlin and Vienna. “Where is Roosevelt?” Sylvia cries out in despair.

This disturbing and thought-provoking production is enhanced by the excellent set design by Dunsi Dai, and moving musical interludes between scenes performed by cellist Beverly Field. Director Deanna Just, who has been nominated for a Kevin Kline Theatrical Award for her previous work, the superb cast and production staff deserve a standing ovation for bringing this important work by America’s greatest Jewish playwright to The New Jewish Theatre of St. Louis.