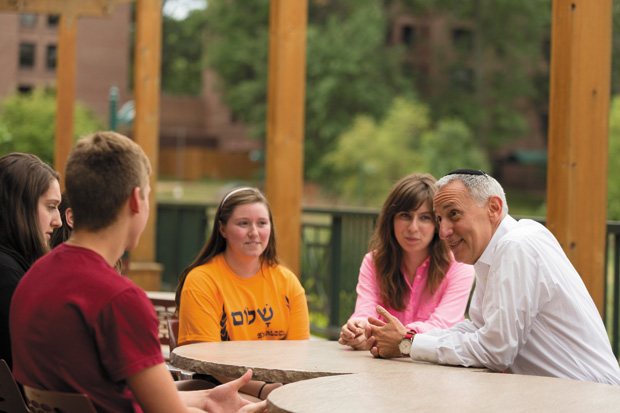 Eric Fingerhut, Hillel’s new president and CEO, speaks with students at Washington University during the Hillel conference there this week.

The introduction of a new leader, the swapping of programmatic ideas and hours of camaraderie will be the highlights of the annual Hillel conference taking place this week at Washington University.

“It’s a really great opportunity for me as a director to connect with a lot of my colleagues and other executive directors from around the country,” said Jackie Ulin Levey, head of St. Louis Hillel at Washington University. “Throughout the year, we’re always communicating via list serve and emails. It’s really good opportunity for us to have some lengthy conversations in person about how we can further the Hillel movement and strengthen our own individual Hillels.”

It’s the fourth year the stately local campus has played host to the international confab which got underway Monday with a morning talk by incoming organization president Eric Fingerhut. About 550 Hillel professionals will conference at various events through today before giving way to another 300 arriving students who will be the focus for the remainder of the week before the crowd clears out on Sunday morning.

Levey said she was excited by the prospect of showing her campus to Hillel colleagues and was also thrilled to meet Fingerhut.

“I’m encouraged by his appointment as our new president and CEO,” she said. “Given his background in public service and higher education, he is well-positioned to really help the international Hillel movement move forward to take us to the next stage.”

Visitors from out of town were enthused to gather in St. Louis for the event. Rabbi Matt Rosenberg has only been on the job for four weeks leading the Texas A & M Hillel in College Station but that’s all the more reason to enjoy his first-ever conference.

“Getting connected with the wealth of knowledge and experience that is available here is going to be the highlight of my year,” said the 40-year-old. “Every Hillel has probably had the issues I’m having and I can gain information about how they solved those problems and how they overcame them without having to reinvent the wheel myself.”

Sitting across the table from him, Andrea Hoffman, an executive director from the University of Chicago, has been attending these events for 25 years. She said she liked the restructuring of this year’s sessions which allowed for greater flexibility.

She thinks the change will boost attendance.

“This isn’t like most professional conferences,” she said. “Most people will probably go to sessions because they are interesting and really meant to help us do our jobs better.”

Samuel Konig, an executive director from Towson University in Maryland, had a special reason to attend. A program he helped put together, which took students on a trip to Poland, was going to be singled out by Fingerhut during the conference. Being able to trade ideas is a big part of the value of these get-togethers, he said.

“It’s great because it shows that we’re able to take something which is conveyed to us in general and do it in a practical way,” said Konig. “The big picture is all about having an impact on Jewish students once they graduate.”

One program that seemed to be on everyone’s mind was an engagement initiative started by Hillel in 2006, which utilizes so-called “superconnectors,” or student social leaders, to link their peers to Jewish life through events. About 80 percent of the arriving students were in the program which Ellen Goldstein, Hillel’s vice president of marketing and communications, said had touched about 85,000 unengaged Jewish students through 1,800 superconnectors since its inception.

“It could be an a cappella singing program. It could be a kickball game. It could be some kind of arts conference or a women’s empowerment seminar,” she said. “We get them in and try to shape that through a Jewish lens and then they meet other people who are interested in those things.”

Konig said that peer-to-peer relationships are vital in building such connections.

“We’ve seen that that model is a very successful one because it’s able to really go into the trenches and build up from the bottom,” he said.

Noam Soker, a 21-year-old from the University of North Carolina at Chapel Hill, is one of those superconnectors. She said an indoor soccer team helped introduce her fellow Jewish students to the community.

“Slowly, they come to Shabbat and then they find someone else who is really into soccer and they become a smaller superconnector,” she said. “Everyone is an engager. If you find someone with something in common you are going to connect with them. Hillel just equips us with the tools that we need to learn how to better use our abilities to connect naturally and insert a Jews lens.”

She said her generation is strongly geared towards the Internet but social media was really just a beginning.

“The only way to create those deeper connections is to supplement it with face-to-face contact which is incredibly important for Hillel,” she said. “We have been equipped with the skills to better use social media but the value of face-to-face conversation is not lost on us.”

The important thing is to be a good listener.

“It’s not about being interesting. It’s being interested,” she said. “I want to connect with people and know who they are rather than them know who I am because that’s a one-way relationship.”

Tabitha Nemeroff, a student at George Washington University in the District of Columbia, said she feels that Millennials could use more in-person contact and thinks Hillel can be a part of that. In one recent project, she helped assemble a prayer book.

“We created a modern-day siddur that was compiled from quotes and poems and artwork which were meaningful to students,” said the 21-year-old. “It was a way to connect them spiritually to Judaism but through a new, modern lens of things relevant to them.”

Ralph Taber, an executive director with Franklin and Marshall College in Pennsylvania, said that he enjoys these events because of more than just the networking.

“There’s also the content, the opportunity to sit down and study Talmud and Torah or other texts with people smarter than me and I learn to translate that information to my students,” he said.

The people, however, are important, too.

“I have only one other staff person who works with me in a full-time capacity,” he said. “It helps me to meet other colleagues and see what they are doing in terms of new ideas, innovations, challenges, relationships. These are people we reach out to during the school year to share something good or ask for advice.”