Meet the other ‘President’ of the JCC: Ilya Grinberg 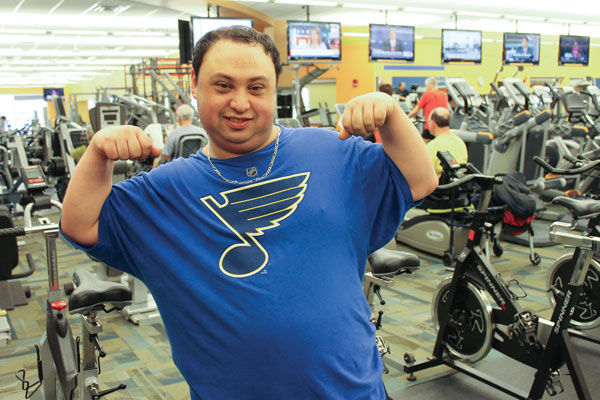 Ilya Grinberg is the president of the Jewish Community Center in St. Louis. At least that’s what he tells people.

He seems to know the name of every stakeholder at the organization, no matter his or her level of importance.

Jasmine Rangel, an inclusion coordinator at the JCC in Creve Coeur, said that when she met Grinberg, who is intellectually disabled, he told her about his position.

Grinberg has been a staple for two decades at the Jewish center, where he performs each year in a barrier-free theater program, participates in a weekly friendship group and holds court in the locker room and fitness center.

“I like to meet new people and help people out,” said Grinberg, 31. “If new members don’t know where to go, I show them.”

He also spends four hours each day working in the kitchen at Keysor Elementary School in Kirkwood.

In short, he is a success story.

“With the right support system and community and environment, someone with a disability can do anything that people without a disability can do,” Rangel said. “Yes, he has a diagnosis, but that diagnosis doesn’t define him. People know him as Ilya.”

But if Grinberg, a Jew with a disability, had remained in Russia, things might have turned out differently.

Grinberg was born and grew up in Leningrad, now known as St. Petersburg, and left with his parents and older sister in 1991, shortly before the collapse of the Soviet Union. Grinberg’s father, Mark, had an aunt who lived in St. Louis, and, with her help, they were able to enter the country as refugees.

At that time, Soviet President Mikhail S. Gorbachev admitted that hatred of Jews still existed in the nation’s “everyday life.” Mark Grinberg, who studied electrical engineering and served in the Soviet army, said he had difficulty finding work or was paid less than non-Jewish colleagues.

“We left because of the discrimination,” said Mark Grinberg, who owns Rizzo’s Fresh Fish Market on Olive Boulevard in University City.

In Russia, Ilya Grinberg was in a general kindergarten classroom. Few, if any, resources were available for students with special needs, his parents said. Human Rights Watch reported in 2014 that in Russia, 30 percent of children with disabilities were placed in orphanages, where violence was common and families were sometimes discouraged from visiting.

Adults with intellectual disabilities still face challenges in the United States. Only 44 percent of adults in that population are in the labor force, meaning they are employed or looking for work, according to a 2014 survey conducted by Gallup and the University of Massachusetts Boston.

After growing up at JCC camps and reaching the age where he could no longer attend as a camper, Grinberg still showed up at the flagpole in the morning for “Hatikvah” and other songs, said former JCC camp director Joey Boime, who spent 17 years at the organization before leaving in 2013. Eventually, Boime was able to hire Grinberg, who spent a few years working at the camp, doing odd jobs, helping out at lunchtime and entertaining campers with tricks off the diving board at the pool. Boime said he became “part of the camp culture.”

“He’s happy with what he has,” Boime said. “That’s something people can’t take away from him.  People worry about what car they drive, or what house they own, or how much money they make. This guy is happy just showing up.”

At Theatre Unlimited, this year’s show is “Menken the World a Better Place,” featuring the music of Alan Menken, the composer of classic Disney musicals such as “Aladdin” and “Beauty & the Beast.” Grinberg usually will help other performers learn their lines, Rangel said.

When not participating in programs or Zumba classes at the JCC, Grinberg roams the gym and locker room, cracking jokes or talking about Vladimir Tarasenko, the Blues star and fellow Russian.

Rangel said that because Grinberg is “such a social guy” who always has an update about sports or the weather, there is sometimes a misconception that “he needs to be the center of attention.”

“I think people think of him as just the social butterfly,” Rangel said. “But he’s also OK with being in the background helping people.”