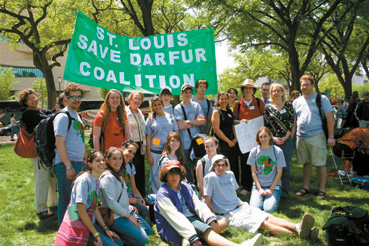 BY JILL KASSANDER,SPECIAL TO THE JEWISH LIGHT

WASHINGTON — Thousands of people from around the country gathered on Smithsonian Mall in front of the United States Capitol to send a message to the world: not on our watch. The rally was the final destination for the 21,000 mile, 22-city national tour of photographs of the stricken region by former Marine Captain Brian Steidle. Said Steidle, “We said ‘never again,’ again and again and again and yet we’re here again!”

Individuals and groups wore t-shirts and banners proclaiming “Never Again,” “Save Darfur” and “Not On Our Watch.” Many also identified their cities and or organizations, including the more than 40 people in town for the rally from St. Louis. The Jewish Community Relations Council acted as a coordinator and information point for people from St. Louis wanting to attend the rally. “There were many diverse groups and individuals, not all Jewish, who are here with us at the rally,” said Judy Hoffman, international affairs associate of JCRC. “There are students from St. Louis University, Washington University and other individuals who learned about the rally from the JCRC. We are putting our strengths together to bring awareness about the situation of Darfur to St. Louis.”

There were many times during the speeches by local and national dignitaries and celebrities where people were encouraged and praised for coming together at the rally with one voice. Said Rev. Al Sharpton, “The world needs to see that Americans of all races, religions and politics will stand together despite our differences. We will not remain separate in the face of Darfur. We know when Americans come together we can stop anything.”

St. Louis residents participating in the rally felt the sense of empowerment. Said Fran Hyman of Olivette, “I’m here because of the American Jewish World Service which co-sponsored the rally. I am a contributor and so I started to hear about it. When I talk to people about Darfur, so many don’t know what’s going on. That’s what brought me here. I felt someone has to speak out.”

Educating ourselves and others is also important to Michael Kuelker, a professor at St. Charles Community College. Kuelker said, “I teach Holocaust literature and we study and discuss genocide. Teaching about Darfur is a natural progression of those lessons. Students learn about the consequences of inaction on the part of the international community 60-65 years ago and today.”

Rabbi Lynn Liberman spoke about the situation in Darfur last year in her congregation in western Massachusetts before returning to St. Louis. She was invited to be part of the St. Louis Save Darfur Coalition. Rabbi Liberman created a bulletin board to educate the students at Solomon Schechter Day School where she is a teacher. Said Liberman, “My students know I am attending the rally today. I’m hoping to talk about it Monday given the proximity of the rally to Yom HaShoah. Having recently seen the film Hotel Rwanda, I don’t want another film like that to have to be made.”

One of the speakers was Presidential Medal of Freedom recipient Paul Rusesabagina whose story was told in the film Hotel Rwanda. Said Rusesabagina, “In Rwanda more than 12 years ago the militia slaughtered innocent people in the hills, in the cities and the towns. In Darfur, it is exactly the same. Today the world knows what is going on. It is watching. Awareness has been raised.”

Ninth-grade students from Central Reform Congregation were in DC for the entire weekend. They were briefed on the situation in Darfur by legislative assistant Sarah Burrows at the Religious Action Center. Participating in the rally on Sunday was the highlight of the trip for the students. “The Darfur rally really had an impact in making me feel pro-active instead of apathetic in situations like Darfur. It felt great to make a difference and be a part of history,” said Rebecca Lowell. “It made me feel like I have the ability to do things that will improve the lives of people around the world,” said Josh Oberman.

Director of the RAC, Rabbi David Saperstein spoke at the rally. “Mr. President, senators, and representatives: We have gathered here today and will lobby you tomorrow to say: make no mistake, an ‘A’ for effort is not enough – your legacies and ours will be measured not by efforts alone but by whether in the end we stop or fail to stop this genocide,” Rabbi Saperstein said.

Rabbi Steve Gutow of the Jewish Council of Public Affairs, who had previously served as the rabbi for the Reconstructionist Minyan in St. Louis was one of the 11 protestors including five members of Congress who were arrested for demonstrating in front of the Sudanese Embassy. (See commentary, page 7) He spoke at the rally offering his comments in the form of a prayer saying there is a “cruel Pharaoh in Sudan” and “enough is enough.”

Speaking up and taking a stand was a strong message from several speakers. “Please do not be silent,” said Holocaust survivor Nesse Godin. Said Elie Wiesel, “I am here as a Jew because no one came to help us. We sinned with Rwanda. We could have saved people. The world should be ashamed. We refuse to be silent because silence helps the killer, never his victims. Darfur is the world capitol of human suffering. Darfur deserves to live. We are its only hope. May God help us if we don’t save Darfur.”