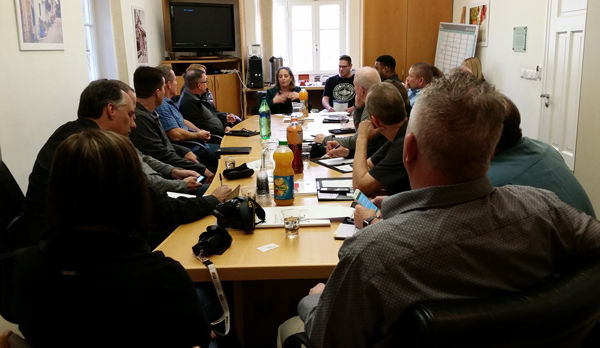 Police officers from the St. Louis area and the western United States spent eight days in March in Israel learning about the country’s counterterrorism efforts.

Clayton Police Chief Kevin Murphy is proud of how his department has handled protests in the three years since the police shooting of Michael Brown in Ferguson.

That includes officers’ response to a Nov. 8 protest outside the Anti-Defamation League’s office over trips that take police officers here to Israel for counterterrorism training. Murphy joined top law enforcement officers from Creve Coeur, Florissant, Frontenac, Olivette and St. Ann on such a trip in March.

Jewish Voice for Peace (JVP), a group that supports boycotts, divestment and sanctions against Israel, organized protests in 15 cities, including Clayton, to demonstrate against what it calls “deadly exchange” between U.S. and Israeli law enforcement.

“It really surprised me that there are people who say our going over to Israel was a matter of learning to kill people in this country,” said Murphy. “There is no way that my city would want me involved in anything like that, nor would I involve myself.”

The police leaders who went on the trip defended not only their participation in the program, but also their respective departments’ treatment of African-Americans at home.

“To hear that somebody thinks this is to find a way to oppress another culture is so far from the truth, and it’s disappointing,” said Chuck Thal, a major with the St. Ann Police Department.

The ADL, a nonprofit that focuses on anti-Semitism and bigotry, has organized trips over the last decade for more than 100,000 law enforcement officials nationwide, according to the organization. The local chapter has organized four trips for St. Louis area police officers.

In Clayton, police officers stood in front of the ADL office and told JVP protesters it was closed. The protesters were there to speak out against what JVP describes as “discriminatory and repressive policing in both countries, including extrajudicial executions, shoot-to-kill policies, police murders, racial profiling, massive spying and surveillance, deportation and detention, and attacks on human rights defenders.”

Olivette Police Chief Rick Knox learned of the trip about eight years ago from classmates in a Federal Bureau of Investigation training program. One advised Knox that, “If I ever have the chance to go, I should go.”

Knox asked Karen Aroesty, regional ADL director, about participating but she told him the organization could not fund the trip, he recalled. So he and the St. Ann major reached out to friends and business associates — Knox said he could not share the names — who donated money for the trip. The flight and eight-day trip cost $6,000 per person, Knox said.

It included meetings with Israel Defense Forces commanders, a survivor of a suicide bomb bus attack, residents of a kibbutz on the Gaza border, police experts and members of the Israel National Police and the Palestinian Police Authority.

The police officers spoke with Israeli officials at border checkpoints separating parts of the West Bank controlled by the Israeli government and the Palestinian Authority. They also visited an Israeli prison. Knox came away from the trip thinking about the need for police to prepare for possible terrorist attacks. He was impressed by how Israeli military and law enforcement “protect their country.”

“I have never seen a border protected like their borders,” Knox said.

But as far as translating Israeli counterterrorism strategies to the United States, Knox said, “There are a lot of things we can’t do because of our constitution.”

Some of the other police officers also said they had concluded that Israeli law enforcement likely has more flexibility than they do in the United States.

Given that the majority of Israelis complete the country’s mandatory military service, “I would think that they understand the security risks, that they are more accepting of some of the things that Israel needs to do to protect its internal security versus what the U.S. would be allowed to do,” said Thal, who is also a member of ADL’s regional advisory board. But, he said, “I don’t think they infringe on anybody. It’s a very liberal culture; it’s more liberal than I thought it would be.”

Not everyone who opposes the ADL training uses language as strong as JVP. In September, a councilman in Washington, D.C. sent a letter to the police chief there urging him to reconsider officers’ participation in the program.

“I am concerned that we are not doing enough to prevent the militarization of law enforcement in the District of Columbia,” council member David Grosso wrote. “Learning from military advisors is not what local law enforcement needs.”

When asked what tactics, technology or strategies local police officers learned from the Israelis and would like to implement here, none of the police officers interviewed gave any specifics.

“When you are in the position of having to prepare for these mass demonstrations, the things that we do, speaking publicly about the nuances that we look at, I wouldn’t want to comment on that directly,” said Murphy.

“We learned how they evaluated vehicles and threats at the airport, and that was quite a learning experience from the technology side,” said Thal. He saw how new technologies can “take a 10-hour process of looking at tape and turn it into three minutes.”

One difference a number of the police officials mentioned is in Israel’s response to a crime scene after terrorist attacks. Israel ranked 24th and the United States 35th in the 2016 global terrorism index, which ranks the countries most affected by terrorism.

Still, the police officials said that there were many commonalities between the two countries’ approach to security.

“This trip was in some respect an affirmation that what we do currently is similar to some of the things that are done in Israel,” Murphy said.

The police officials also said they neither saw problems in the way Israeli military and law enforcement treat Palestinians, nor do they see issues in their own departments’ treatment of African-Americans.

“In St. Louis, I believe that people are treated fairly, especially in Olivette,” said Knox. “I am the commanding officer here and I would not stand for that type of discrimination.”