Larry Carp: A life of law, service and song 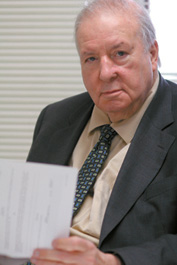 Larry Carp: A life of law, service and song

BY PAM DROOG JONES, SPECIAL TO THE LIGHT

You could say immigration attorney and composer Larry Carp is a Renaissance man. In fact, a lot of people do. “Larry is a consummate professional and a true Renaissance person,” says attorney Eric Banks. “He has an interest in many diverse subjects like music, art and science. He probably has as much of a commitment to public service in general and international service in particular as anybody I know.”

The worldly Carp began his life of law and lyrics in St. Louis. The family lived on Washington Avenue for many years. An excellent student, Carp entered college at age 16 and a year later, at the start of World War II, he enlisted in the Army. He served in Gen. George Patton’s Third Army.

While in the military, Carp was selected to study at the Sorbonne in Paris. “I arrived on July 14, 1945,” he says. “There was dancing in the streets.” After two years he returned to St. Louis.

“When the war was over, I told my father I wanted to be in public affairs,” Carp says. “He brilliantly sent me East, where I had interviews with a lot of famous people. I concluded from those interviews, if I were to go into public affairs, I should have a skill to fall back on, such as economics or law. If you know you are strong personally because you have another skill, you can face those difficult decisions as a public servant. And that’s what I did.”

Carp earned both his bachelor’s and law degrees at Washington University. While in school, he was selected by the State Department to be an intern in the Legal Division of the newly formed United Nations, located at Lake Success, N.Y. Then he won a Rotary International fellowship, which permitted him to earn a master’s degree at the Graduate Institute of International Studies in Geneva, Switzerland. “Those were emerging years,” Carp recalls. “I was very shy, therefore when I went to Paris, I could try out a new me. I met many families, all of whom I’m still in communication with today. These are enduring and very special relationships.”

In his last year of law school, Carp received an invitation from the State Department to join the Young Officer Corps in Washington. “I worked on many things there,” he says, “but the most interesting was analyzing the political and legal systems of Laos, Cambodia and Vietnam, while the French were still there, as well as Morocco and Tangier.”

After earning his law degree, Carp “had to decide what to do next, get a job in Washington or New York or come back to St. Louis,” he said. He had met Illinois Sen. Paul Douglas at a Rotary Club meeting in Granite City, so he asked the senator for a job and subsequently worked for him in the Capitol. He briefly returned to St. Louis to work for a major law firm. Then he got a call from Missouri Sen. Thomas C. Hennings Jr. to serve as associate counsel of the Senate Subcommittee on Constitutional Rights. “That was the same subcommittee Sen. Sam Ervin ultimately headed during the Watergate hearings,” Carp said.

Carp returned to St. Louis to practice law. He also became head of the Young Democrats of St. Louis County and ran for Congress. “This was the Nixon-Kennedy year, 1960,” he says. He won the primary but lost the general election to the incumbent, Tom Curtis. “He was a good friend of mine. The voters were not crazy to send him back. But it was a blow,” Carp says. “I’ve learned that during your life, what matters isn’t whether you win or lose, it’s what kind of person you are. It’s your reputation.”

Carp had been working for a large law firm at the time, primarily on big antitrust cases. He left in 1963 to start his own practice. “I think if I’d stayed there I’d still be ‘the kid,'” he says. “Ever since then I’ve somehow survived running my own shop.”

Carp started as a general practitioner, working on “whatever comes in the door,” he says. He also practiced selective service law on behalf of conscientious objectors. “I noticed there was a gap in family law in St. Louis,” he says. “So I became the second member of the American Academy of Matrimonial Lawyers in Missouri.” He practiced law solo until 1968, then he added various partners.

In 1994, Stephen Sexauer, who joined the firm in 1975, was named partner of the Carp and Sexauer law firm. “I applied for a job with Larry right out of law school because he had an exceptional reputation,” Sexauer says. “Larry has a way of winning people’s confidence and getting them to follow his advice. He can put himself in their shoes and knows where they are coming from, and they know he cares, which is 90 percent of the battle in law.”

Ty Dowdy, Carp’s office manager and legal assistant, also mentions Carp’s sincerity. “Larry’s a good listener, not just regarding what you say but how you say it,” she notes. “He takes a real interest in other people and it’s sincere. He tells me every day how much he appreciates me. I learn more about him every day.”

Carp’s ability to empathize has served him well in his specialties of immigration and nationality law. He found his niche in these areas as a result of a phone call from the Lawyer’s Reference Service regarding an immigration law case. “I won the case on behalf of a major company, and the rest is history,” he says. “That’s what I do mostly now and I love it and I do well at it.” As proof of that, Carp has been included in the Best Lawyers in America for immigration law for over 10 years, selected by his peers.

Carp has lectured on and written many articles on Immigration and Naturalization Law in professional publications, the most recent of which, in collaboration with his law partner, Sexauer, appeared in the 2005 Winter Edition of the St. Louis Bar Journal.

Immigration law “gets pretty complicated in this terrorist age,” Carp says. “But it’s a great system because if you give the straight facts and do what the law says, you win.” Success also depends on knowing the immigration laws and regulations and giving the people who make the decisions what they want, he says. “Also it helps if they know you have a good reputation and you screen your cases carefully,” Carp says.

Carp is passionate about his immigration work because, he notes, “It’s important for people to be able to go from Country A to Country B to develop their fullest potential, ethically, morally and legally, to make a contribution to Country B they would not have made if they had not got there.” He adds, “The feeling of satisfaction that comes from doing this is enormous. But it’s all about doing the right thing. That’s in my DNA and therefore probably came from my Jewish culture and my family through the centuries.”

Carp also derives a lot of satisfaction from his achievements in writing songs and musicals. In fact, right now “well-known people in Nashville are looking over my songs,” he says. A Jewish lawyer writing country-western songs — now where does that come from? “They are good stories,” Carp replies.

The idea, or plot, always comes first, he says. Then he’ll work out the details with a producer like Peter Carson. “Larry is a very creative person, and it’s very commendable that he just never stops. He’s always learning and willing to try something new,” Carson says. “He works hard trying to find the right feeling, lyrically and musically. He writes songs based on feelings and just about every song he writes is on a topic that deserves to be sung about. It’s not just the same-old he-left-me. His songs cross all genres.”

In addition to songs, Carp also has composed four full-length musicals, “For the Love of Adam,” “The Red Ribbon,” “Famous Last Words,” and “God Knows,” all of which have been produced.

Throughout his fascinating life, Carp has earned numerous honors. But one that stands out most is serving as senior adviser and U.S. public delegate to the 55th Session of the United Nations General Assembly. He was appointed in 2000 by President Bill Clinton and sworn in by Ambassador Richard Holbrooke. His appointment was approved unanimously by the U.S. Senate.

“A friend of mine said, ‘Go have a good time.’ But I said, ‘No.’ I made up my mind I would make a difference,” Carp says. His work helped prevent the Sudan from gaining a seat on the Security Council and made it possible for Hadassah to be recognized as an NGO or non-governmental organization.

“Larry had such a breadth of experience at the U.N and in international affairs, he was a natural ambassador and made a tremendous contribution,” says Carolyn Willson, deputy legal adviser to the U.S. Mission to the United Nations. “His work and outreach to foreign delegations brought about a great deal of goodwill and was instrumental in having the U.S. perspective understood. He helped present the good face of the U.S. to the world.”

For decades, Carp’s public service has extended beyond his work. Briefly, he has actively participated as a Commissioner and Vice Chair of the Missouri Commission on Human Rights, and on the Board of Trustees of the English Speaking Union, St. Louis Center for International Relations, George Engelmann Mathematics and Science Institute, and as attorney for the Hispanic organization Image and for the Ethiopian Community Association of St. Louis. In addition Carp is a lifetime member of the board of trustees of the prestigious Academy of Science of St. Louis.

Looking ahead, Carp hopes to take a trip to Paris soon. “I gave a party there in 1999 for 73 people who came from Luxembourg, Italy, New Zealand, America,” he says. “I have to get back there and see my friends again, and maybe give another party.” Beyond that, Carp plans to concentrate on his songs and musicals and to keep his day job. “I don’t like the blank space on weekends,” he says. “I just love Monday mornings.”