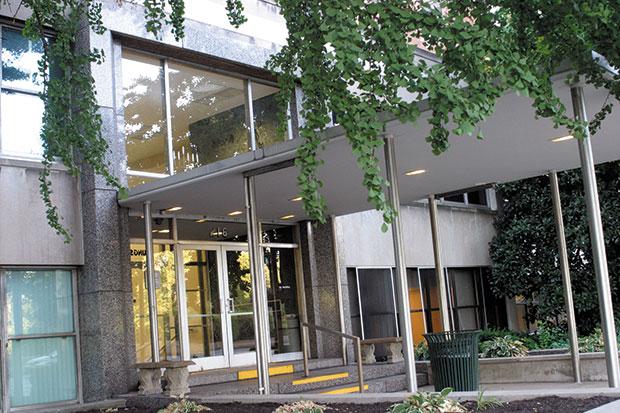 A menorah is visible in the second-story window above the Kingshighway entryway to the old Jewish Hospital building.

Earl Payne had some great experiences at Jewish Hospital but one of the most memorable was when he took a Passover meal up to an elderly woman.

He had been warned that the lady seemed angry at the world and wouldn’t speak with staff.

“I said ‘shalom,’” recalled Payne, an African-American who is not Jewish. “She looked up and said, ‘What do you know about that?’ I said, ‘Well, I’m trying to break the ice with you.’”

A single word had done just that. The woman invited him to sit awhile and talk. After that, she always requested Payne, who then worked in the dietary department, to come to her room.

“The nurse said, ‘How did you do that?’” laughed Payne, who is now a patient care technician.

Payne’s story is one of many vignettes from the old Jewish Hospital Building, a structure which, like the pre-merger institution it once housed, seems increasingly destined to pass into history.

The exact details haven’t been worked out but the edifice, which has stood since the mid-1920s as the rest of the hospital grew up around it, will eventually be demolished to make way for new facilities in a bid to increase Barnes-Jewish’s complement of private rooms and intensive care beds. There are also thoughts of expanding the number of beds at the Siteman Cancer Center while improvements to the neurosciences, heart and vascular programs could also be in the offing.

Rich Liekweg, president of Barnes-Jewish Hospital, said an architect has already been hired and plans may be formulated by the end of this year.

“As we look for opportunities to build on that legacy and bring to this community new facilities to practice state-of-the-art medicine, rest assured we are going to honor our heritage,” he said. “How we are going to do that, until we design the buildings, we are not quite sure.”

A fire, an association and a dream

Some of the first impulses to found a Jewish hospital in town had their roots in the Great Chicago Fire, when hundreds of Jewish refugees made their way to St. Louis to start over. According to an account by local author and historian Burton Boxerman, the blaze brought into being the United Hebrew Relief Organization, a group created by the presidents of the three area synagogues, United Hebrew Congregation, Congregation Shaare Emeth and B’nai El Congregation. That institution outlasted the aftereffects of the fire and by 1878, an outgrowth of the group known as the Jewish Hospital Association began operations. Unfortunately, funding troubles plagued abortive attempts to move towards establishing a bricks-and-mortar facility for the rest of the century even as the 1880s brought a wave of new Jewish immigration to the area from Eastern Europe.

The ball got rolling again in 1899 when a women’s group, the Jewish Hospital Aid Society, began pushing the issue again. Eventually led by businessman August Frank, the effort began to collect substantial funds from leading figures in the Jewish community.

Ground was broken in 1901 in the 5400 block of Delmar Boulevard. But the level of need quickly overwhelmed the three-story building’s 30-bed capacity. New digs were required. A suitable site was located on the west side of Skinker Boulevard but prejudice intervened.

Instead, the group looked to the other side of Forest Park along Kingshighway and by 1926, after an extensive debate over whether to have a kosher kitchen, Jewish Hospital was up and running at its present location. The area at that time was still in the heart of the Jewish community.

The facility served a number of different needs. For one, it provided a place where Jewish patients could feel comfortable and observe dietary laws without bother. But the role it played for physicians was just as important.

“At a lot of hospitals in St. Louis, even when a Jewish doctor graduated medical school, he was not allowed to be on the staff of the hospital,” Boxerman said.

Jewish Hospital endured tough times during the Depression but persevered and by the late 1930s found itself among the area’s premiere medical institutions. According to an official history of the hospital, it was among the first to use penicillin in 1944 and in 1950 became the first in the city to have a radioisotope laboratory. In the early 1980s, it performed the first in vitro fertilization in the state.

In the 1990s however, changes in managed care created shifts that led to Jewish Hospital’s merger with Barnes Hospital, a medical institution founded in 1914.

Not everyone thought the move was necessary. Dr. Mitchel Wolf, an assistant professor of ophthalmology at Washington University who has been associated with the hospital since coming to St. Louis in 1969, said that while Barnes-Jewish continues to provide a high standard of care, he still regrets the loss of atmosphere and Jewish character. He said that buildings are replaceable but he has feelings for what it represented.

“A place that was a focus for Jewish doctors and Jewish patients disappeared,” he said.

During a recent tour of the building, Rabbi Dale Schreiber, the hospital’s chaplain, said she likes to look up at the menorah at the old main entrance and think about why the founders chose that particular spot for the symbol.

“In 1924, the State of Israel wasn’t even on the drawing board,” she said. “They chose it as the representation of what Judaism stands for which is a universal creation story. Those seven lights symbolize the totality of creation.”

Julia Ruvelson, vice-president of the Foundation for Barnes-Jewish Hospital, said the heritage will be preserved. The plaques honoring donors have already been taken down off the Shoenberg Pavilion walls though that part of the building will remain in place.

“Everything has been photographed and catalogued,” she said. “Now we are in the process of contacting our donors and calling as many people as we have phone numbers for and letting them know they can have their plaque or it will remain in storage.”

She noted that the information will be placed on a “digital donor wall.”

“It’s really an exciting time for us because it’s an opportunity to meet with many of these founders and get more history and documentation so that as we do this digital recognition we can go back and acknowledge that,” she said.

Meanwhile, longtime employees of the facility are finding themselves thinking of days gone by.

Steve Hinrichs, manager of food and nutrition since 1987, said he had fond memories of the old kosher kitchen. It wasn’t just patients whom they served.

“We actually had a lot of people that would walk in off the street just to get kosher food,” he said. “There were a lot of elderly people or people who came in arm-in-arm with their spouse. It was a great service that we were able to provide.”

“Coming here has been one of the best things to happen in my life other than my family and children,” said Hicks who has worked for the institution since 1983. “The support in my career, the opportunities that existed in my profession, the camaraderie with the team I just don’t think you can really find that in many places in this world.”

“People talk about the uniqueness and being one of a kind in the universe,” he added. “It was truly one of those places.”

Hicks said while some things change, others remain the same.

“We still carry a lot of that spirit with us,” he said, “and I know that we’ll carry it into the new building once it’s constructed.”