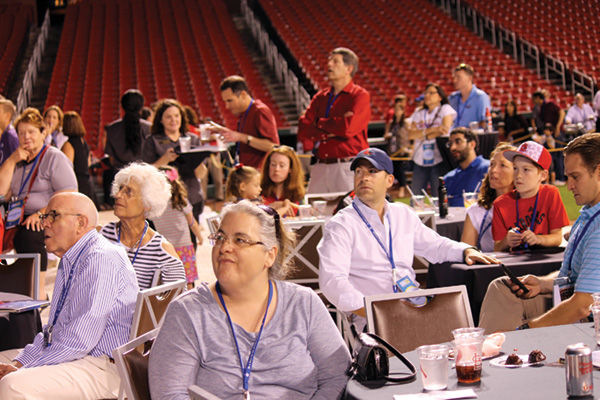 Jewish Federation of St. Louis has changed its fundraising approach, most notably by shortening the duration of its Annual Campaign to 100 days from more than 16 months.

Leaders of the organization decided to make the change in part because of a decrease in the number of donors over the past two decades. Board members and federation staff said it has become harder to maintain people’s interest over a long period.

“This allows us to take advantage of limited attention spans and say, ‘This is the time to think about the Jewish community and think about making a gift,’ ” said Andrew Rehfeld, president and CEO of Jewish Federation.

The organization held its annual meeting and campaign kickoff Sept. 1 at Busch Stadium. The event featured a session in the Redbirds Club to honor award recipients, as well as a speech by Adam Greenberg, a Jewish former Chicago Cubs player.

Rehfeld, before a couple of hundred attendees, spoke about the need to enlist more donors because many of the Federation’s supporters are over the age of 80.

“We need to grow the base quickly because of the demographics of our donor population,” he said. “It’s important as a community that we recognized where we are.”

The number of Federation donors has decreased each year since 1992, with the exception of a few years when the number remained flat or increased only slightly, Rehfeld said. Last year, the local Federation saw a 3 percent increase, while donations to Jewish Federation of North America, an umbrella group, decreased by 4 percent.

But Rehfeld acknowledged that the slight increase locally might have been a fluke or an anomaly.

The majority of Jewish Federation chapters focus their campaigns over a few months, said Tim Stern, chairman of the St. Louis campaign. Jewish Federation of Cleveland moved to a three-month program in 2013 and has seen donations increase each year.

Rebecca Golsky, public relations manager for the Cleveland Federation, said, “A shorter annual campaign allows our volunteers, professionals and partners to focus on raising money for three months and building community and planning for the future the remainder of the year. It has been tremendously successful.”

Rehfeld said the St. Louis chapter also has tried to change the way in which it interacts with donors. He said the perception of Federation has been that “you donate first, then we engage you.”

“We have to inspire people about the value of Jewish life before we start asking them” to donate, he said.

For example, Federation is organizing a mission to Israel in February. In the past, Rehfeld said, participants would have been expected to make a certain minimum pledge. Now, aside from the $2,950 cost of the trip, there is no such expectation.

Rehfeld sounded optimistic about changes, but he said it will take a few years before the organization knows if they have been effective.

Stern said he is excited but nervous about the 100-day campaign.

“We’re a little apprehensive because you never know what the outcome is going to be,” he said. “We’ll know in January when we add up all the numbers, but it’s not a guaranteed success.”