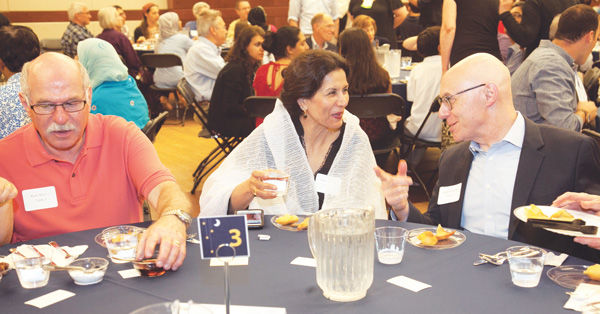 Jewish Federation President and CEO Andrew Rehfeld (right) shares a laugh with Ghazala Hayat,  former chairwoman of the Islamic Foundation of Greater St. Louis, during an Iftar dinner hosted by the Jewish community at the J.  At left is Rick Abrams.

“As a sign of our friendship and strengthening relationship with the Muslim community we felt that this was our opportunity to invite our friends over for dinner,” said Maharat Rori Picker Neiss, executive director of the Jewish Community Relations Council.

Sponsored by the JCRC and 11 synagogues, the gathering marked the first time the Jewish community as a whole hosted a meal for Iftar, the traditional breaking of the fast done at sunset during the Islamic holy month of Ramadan.

Picker Neiss said about 250 were on-hand to experience the event with a fairly even breakdown between Jews and Muslims. People of all faiths were welcome to attend.

“We are all one. We all love each other,” said Helal Ekramuddin, chair of the Islamic Foundation of Greater St. Louis. “There is only a few people in this world who believe in hate and discrimination. It is very important to show these two communities getting together to have a meal together.”

The meal came after brief remarks by a number of participants who explained some of the particulars of Ramadan fasting and commented on the importance of tolerance and pluralism. Speaker Michael Newmark of the Newmark Institute told the crowd that diversity was a given in the United States but that turning it into a strength requires effort.

“We need energetic engagement with diversity,” he said. “We need to achieve understanding across lines of difference.”

Interviewed before delivering his comments, Bahar Bastani, of Dar-al-Zahra Mosque’s Shia Islamic Education Center, said he felt the world was polarizing toward extreme views in many political and religious communities.

“Events like this help people to see the human face of each other,” he said, saying such gatherings fight bigotry and demagoguery. “If I sit with you and break bread, I see you have the same concerns that I have, the same worries, the same interests.

“While our tongues may speak differently, our hearts beat and feel exactly the same,” he added.

Speaker Julia Williams told the group that part of the impetus for the initiative related to the Muslim response to the vandalism of more than 150 gravestones at Chesed Shel Emeth Cemetery in February. She said in dark times, a true friend is one who walks with you and brings a flashlight.

“The violation of that sacred space struck a blow to my heart and our collective spirit. For me personally, it was a moment of shock and despair,” she said. “The immediate and overwhelming support from the Muslim community during this time was incredible. Suddenly, thousands of people surrounded us with flashlights and reminded us that we were not alone.”

Just before 8:30 p.m., the call to prayer was sounded and participants consumed dates, a traditional food for breaking the fast. Muslim attendees left the room to pray and returned to eat lentil soup and samosas before moving on to a main course of lamb casserole. Kohn’s Kosher Meat & Deli catered the meal, which was both kosher and halal.

Seating arrangements were designed so that both Muslims and Jews were present at each table.  Small cards at each place setting featured icebreaker questions such as “Does your name have a meaning?” and “What is your favorite holiday?”

Some didn’t need much help starting discussions – and they weren’t always about religion or world events.

“We just had a great conversation about Dr. Who,” said Leora Spitzer as she surveyed the buffet.

The 22-year-old Kol Rinah congregant said she had come because she felt that she existed too much within a “Jewish bubble” having attended day school and gone to work for a Jewish agency.

“The best way to break down those stereotypes and all of those prejudices is to talk to people who are different than yourself,” she said, noting that she had spoken that evening not only with Muslims but also a Catholic nun who was in attendance.

“I don’t know if I’ve ever had a conversation with a nun before,” Spitzer said.

Muslim participant Amber Bokhari said the gathering was the first time she’d ever spoken with a rabbi. She added that she was interested in learning about how Jews fast for the holidays.

David and Martha Kreipke of Creve Coeur said they had attended to make friends and become more cognizant of what others believe.

“We just noticed the event being advertised and figured that it is more important now than ever to reach out to other groups and become more aware of what other people are thinking,” said David.

Robert Flannery was one of those on hand who was neither Muslim nor Jewish. Instead, he wore the collar of a Catholic priest. As ecumenical and interreligious officer for his diocese in Belleville, he said he often attends gatherings like this and often is struck by similarities among the religions. He recalled one Pakistani man he’d met at a recent event.

“He’s read the whole Bible, the Old Testament and New Testament three times, which is better than a number of our believers,” Flannery said, “and he’s doing it out of curiosity but also to find out the things we have in common.”

Rabbi Jim Bennett of Shaare Emeth said he thought the event was a good way of breaking down walls. His congregation hosted a similar event in 2013 with the local Turkish community.  He said it had led to other forms of engagement, something he hoped would happen here.

“I think that’s what we’re going to see from this as well,” he said. “I’ve been walking around and noticing friendships emerging, connections with people saying let’s do this again. What would be really beautiful I think would be if families would connect throughout the year and find common ground and opportunity to build real relationships.”