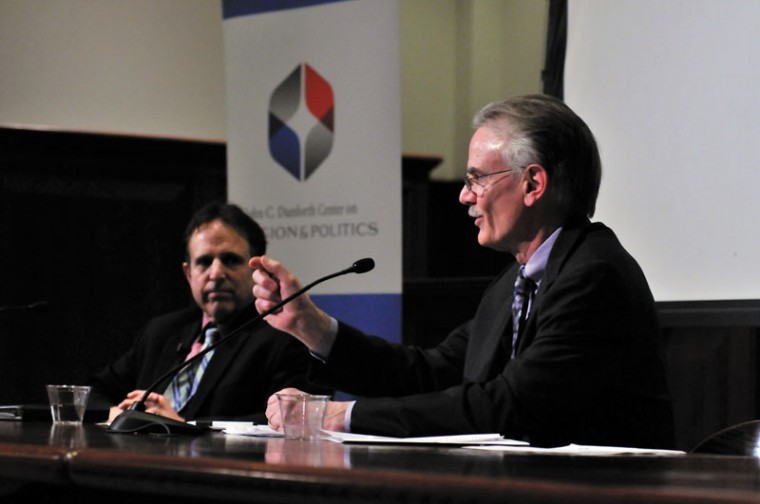 Rev. Dr. Michael Kinnamon (right), general secretary of the National Council of the Churches of Christ in the USA, and Rabbi Steve Gutow, president and CEO of the Jewish Council for Public Affairs, spoke during “Bridging Divides through Interfaith Initiatives” last week.

Rev. Dr. Michael Kinnamon, general secretary of the National Council of the Churches of Christ in the USA, and Rabbi Steve Gutow, president and CEO of the Jewish Council for Public Affairs, became close friends when each worked in St. Louis before assuming their present posts. Gutow had been the rabbi for the Reconstructionist Minyan in St. Louis and Kinnamon was the Allen and Dottie Miller Professor of Mission, Peace and Ecumenical Studies at Eden Theological Seminary, where they worked with Christian, Jewish, Muslim and other groups on interfaith projects. That friendship, according to both leaders, has continued to serve them well in their interfaith work at the national level.

Gutow and Kinnamon were the keynote presenters at a program last Wednesday titled “Bridging Divides through Interfaith Initiatives,” which was jointly sponsored by the John C. Danforth Center on Religion and Politics at Washington University; the Jewish Community Relations Council of St. Louis, the public affairs arm of the Jewish community, and its Michael and Barbara Newmark Institute for Human Relations. About 200 people attended the program in the Anheuser Busch Law School Bryan Cave Moot Courtroom of Washington University.

In his remarks, Kinnamon paid tribute to the strong tradition of interfaith work in St. Louis, “which has contributed so much to my own understanding of constructive civility.” Kinnamon praised the goals of the Danforth Center on Religion and Politics, “in part because its very name points to the intersection of two major trends of our time in this country: a loss of confidence in political institutions, in the capacity of politics to address constructively the great issues of our day, in large part because contemporary political life is so marked by partisan polarization rather than shared pursuit of the common good; and the resurgent influence of religion in public life.”

Both Kinnamon and Gutow lamented how much mainstream media in America focuses on the controversial and divisive rather than the constructive, such as the burning of a Koran by Florida minister Terry Jones. Kinnamon said, “the religious communities garnering the most media attention tend to be those that contribute to political, cultural polarization, not those that heal it.” Gutow said that it is difficult to get media attention for positive interfaith activities, such as efforts among Christians, Jews and Muslims to combat poverty in urban centers around the country.

Another shared theme is the importance of civility in interfaith work and general public discourse. “These convictions are for me the basis of what I am calling ‘constructive civility’-that is a civility that is not simply a code for ‘let’s all get along’ or ‘let’s not rock the boat, but a civility that is the outward expression of an affirmation of otherness that, itself witnesses to God’s will for right relationship,” Kinnamon said.

He went on to differentiate between civility and justice and the “potentially difficult tension” between them. “Saying ‘yes’ to our neighbors as children of God surely compels us to say ‘no’ to those ways of acting and thinking which threaten or demean those neighbors,” he said. “In other words, the very principle that enjoins us to civility also points in the direction of justice. Otherwise, our civility masks what Herbert Marcuse called a ‘repressive tolerance’ that allows racism and xenophobia and religious bigotry to flourish in the name of diversity.”

Gutow stressed the importance of a theological basis to interfaith work. “We should reach out to one another, connecting what is Godly in each of us as we seek together to do God’s work. Dialogue is of course important, but it can only go so far. What is also needed is the willingness to pound the pavement and the exercise of leadership. We need the kind of direct experiences as when Michael and I were both in Arizona and saw illegal immigrants being sent back across the border. We must see that our spiritual journey is directly connected to their spiritual journey.”

Gutow offered four thoughts towards the goal of meaningful interfaith cooperation. They are:

• Building relationships. “Michael and I have been friends since our St. Louis days. When there are issues to discuss, we pick up the phone, meet for lunch and discuss them. Networks of friendships matter,” he said.

• Being respectful, even in disagreements.

• Listening. “How we hear each other is important, and we should always listen with the intention of realizing that we might be wrong about a view we have held,” he said.

• Speaking up, especially “when we hear people put others down or demean them. We must reprimand especially people close to us, people we love and say, ‘you can’t talk that way.'”

Gutow recalled the strong friendship that developed between the Rev. Dr. Martin Luther King and Rabbi Abraham Joshua Heschel. “When Rabbi Heschel went down to Selma to march with Dr. King, he said he felt like he was praying with his feet. Such is the power of friendship working for the benefit of all people. And we cannot do it alone.”

In the question period that followed, Kinnamon and Gutow said that their friendship and mutual respect has helped them find paths to understanding during challenging periods, such as when Israel was being criticized by some churches for its responses to the rocket attacks on southern Israel from Gaza. “I came to realized that I needed to be more direct in criticizing the rocket attacks from Gaza even as I expressed concern over Israel’s response to the attacks,” Kinnamon said.

Kinnamon also said he appreciated the support of Jewish and Muslim groups regarding the persecution of Christians in places like Egypt, Iraq and Nigeria. “We especially appreciate this support from our Jewish and Muslim friends since the history of the church in relationship to those communities for many years was not positive.”

Both Gutow and Kinnamon welcomed the op-ed article Judge Richard Goldstone in the Washington Post in which Goldstone said he no longer agreed with its finding that Israel deliberately targeted civilians in the Gaza conflict. “It would be helpful if Goldstone formally amended the report even though the United Nations Human Rights Council has been stacked against Israel.”

In addition to the Danforth Center and the JCRC’s Newmark Institute, the program had a number of other supporting organizations, including Interfaith Parnership, Faith Beyond Walls, Eden Theological Seminary, the St. Louis Rabbinical Association and the Washington University Interfaith Campus Ministry and its constituent agencies and programs.