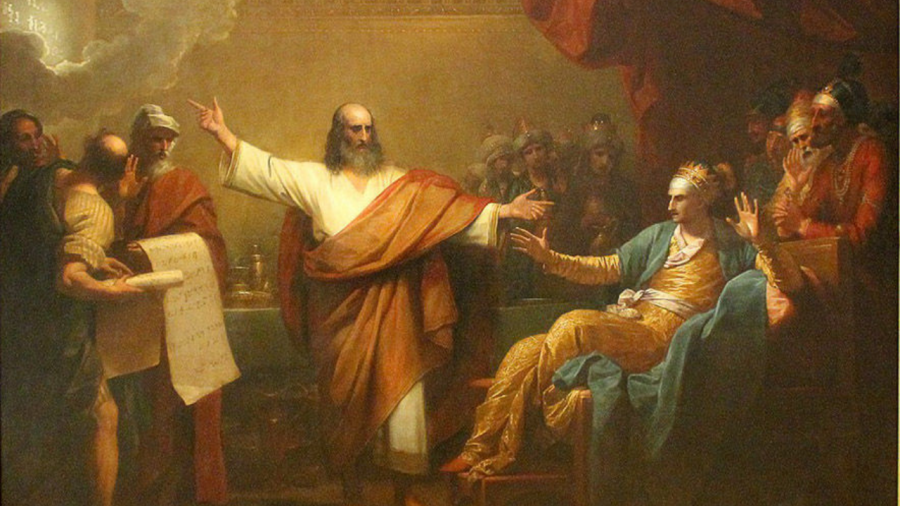 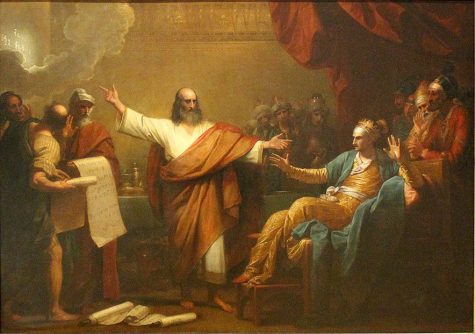 The Story Of “Daniel Interpreting to Belshazzar the Handwriting on the Wall”
This oil on canvas was pained in 1775  by Benjamin West. West is regarded as the “father of American painting” as he was one of the most influential artists of the pre-Revolutionary War era.

This work is tells the biblical story of Balshazar, a 6th C  BC Babylonian ruler. The Temple in Jerusalem had been looted and the Babylonians were out of control, drinking out of holy vessels at a banquet. Mysterious handwriting appears on the wall. Balthazar’s advisors try to understand the handwriting, but to no avail. So Balshazar asks the prophet Daniel to interpret it. Daniel had been captured by Nebuchadnezzar in Babylonia and held at court as a prophet who could talk to God.

Daniel stands in the center of a hall, in front of a table laden with dishes, pointing with his right hand to flaming characters on the wall on the left. Belshazzar sits on the right, horrified, surrounded by guests, with wise men on the left holding scrolls, having vainly attempted to interpret the writing.

Daniel says that the 4 characters on the wall prophesize that because Balthazar has not given honor to God, his kingdom will be given to the Medes and Persians.

“What’s interesting here is that this grand narrative is an allegory, a moral and yet very  political message.” said Dale Sharon. “The year was 1776 and West lived in England and relied on the favor of George III. He really didn’t want American independence.”

This, then, is a veiled warning to the King to compromise with the citizens of America. “Read the writing on the wall and just get along,” said West, through his work.

West supported conciliation. He claimed that there would be an ominous note, if King George, like Balshazar, didn’t change. This is where his head was in 1776, trying to straddle both worlds and still maintain his position with the King.  It may have been a “quiet message to George III to get his act together.” Of course, the king never did aim for a peaceful way to make nice with those angry American colonialists.