JCRC’s Student to Student program to expand to other cities 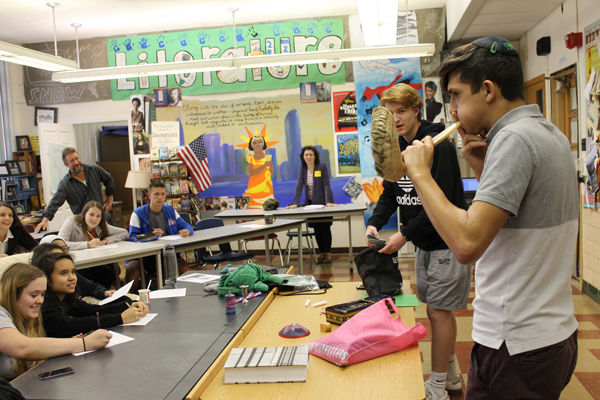 ABOVE: David Feit Mann, a sophomore at Yeshiva Kadmiah High School, closed a presentation for students in an AP English class at Affton High School by explaining how a ram’s horn is used in Judaism.Photo: Eric Berger

The Jewish Community Relations Council of St. Louis plans to expand its Student to Student program to other cities after receiving a $15,000 grant.

JCRC, which started the program in 1992, sends Jewish high school students in the St. Louis area to schools in the region where most teens otherwise have little contact with the Jewish community. During the 2015-2016 school year, there were 122 Jewish participants who spoke to a total of about 4,000 students in different presentations, according to JCRC, a non-profit organization.

Now JCRC will introduce the Student to Student (STS) program to teens in Indianapolis, Des Moines and a third city that has yet to be confirmed.

“We have had a lot college kids come back who did the program and told their friends about it and they can’t believe how cool it is,” said Fawn Chapel, coordinator of STS. “For years, we have been wanting to share this with other cities.”

The grant came from Natan, an organization that supports smaller Jewish organizations that take “innovative approaches” to helping Jews around the world. The STS program will start in the other cities this school year with three groups of four students in each, said Chapel, who will help train the students.

In the meantime, Chapel is still working with students in the St. Louis area. On Monday, she visited Affton High School with two students from Ladue Horton Watkins High School, a public school, and one from Yeshivat Kadimah High School, a Modern Orthodox private school in Olivette.

“Just like any other race or religion, there are stereotypes that aren’t necessarily true and people might think only one thing about that group,” said David Feit Mann, a sophomore at Kadimah. “It’s important to show people that haven’t seen or heard Jews before that we’re people, we’re around and we’re just like everyone else.”

During the presentation, the students — who identified as Reform, Conservative and Orthodox, respectively — discussed how they celebrate Shabbat, what they eat or don’t eat and whether they would date or marry a non-Jew, among other topics. They made a mock chuppah and invited two students to stand under it as they explained Jewish wedding traditions.

Talon Akes, an Affton senior, said that before the presentation he had largely based his conception of Jews on the musical “Fiddler on the Roof.” During the talk, Akes, who is Christian, said that he doesn’t “get to church every Sunday — in fact I haven’t been in a month or so but I still consider myself Christian.”

Then he asked if someone does not have a bar or bat mitzvah or observe other rites of passage, “Are they still considered a full-fledged Jew?”

“It’s a religion but it’s also a peoplehood,” added Chapel.

Later the students described some kosher laws and explained what the labels on food packaging mean. When they pointed out the kosher symbol on a package of Oreos, one Affton student said, “Oh! That’s what that means?”

To conclude the presentation, as it was just a few days after Yom Kippur, Feit Mann brought out a shofar and blew it for the students.