JCC will get major overhaul 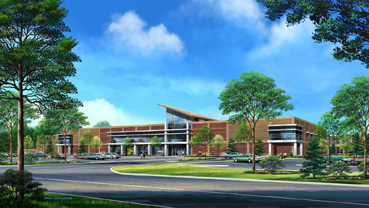 JCC will get major overhaul

BY PAUL HACKBARTH, SPECIAL TO THE JEWISH LIGHT

Renovations to the Jewish Community Center are getting underway this summer thanks to $33.5 million in contributions toward a $49 million capital campaign, the largest capital and endowment campaign in the organization’s history.

Upgrades to the JCC campuses in Creve Coeur and Chesterfield will begin this summer to improve the organization’s cultural, educational and fitness programs.

“It’s all about improving the ability to promote quality programming,” said Lynn Wittels, JCC chief executive officer. “It’s quite exciting. It will all happen in two years give or take a few months.”

At the Creve Coeur campus, the Carlyn H. Wohl Building will undergo the most changes, with a mixture of renovations to the current space and the construction of an additional building.

Construction will occur in three stages, Wittels explained. The first, which begins this fall and finishes in one year, includes plans to build a new fitness facility facing Schuetz Road.

“We want to incorporate more fitness and health activities in the new building,” she said.

The second part will make improvements to the administrative offices and the social and cultural wings. These offices will move to the former men’s health center and will be linked to the new fitness center. A new Jewish Learning Center called Beit Midrash, a performance center and a centralized early childhood center will also be added.

Stage three will consists of upgrades to the grounds and lighting.

Michael Staenberg, JCC board chairman, said the Wohl Building will be completed by fall 2008 or spring 2009, but construction could last as late as fall 2009.

“This is one of the biggest projects ever and it was not done haphazard. It’s been years in planning,” he said. Additions have been made to the 47-year-old Wohl Building four times before, but never on this scale.

In addition to the Wohl Building, renovations at the Marilyn Fox Building in Chesterfield have already begun and will continue through October or November. Since the Chesterfield campus opened in 1997, no money has been spent on renovations there.

Changes to the outdoor pool geared toward older children will be finished by June 15. Along with expanding the fitness center at Fox, the childcare center will receive upgrades to accommodate more kids and a larger age range.

“We are planning to limit any interruptions. We’re not saying there won’t be any, but they will be very limited,” Wittels said.

The Greater St. Louis Jewish community provided the $33.5 million in contributions and endowments, including $15 million alone from Staenberg.

“As far as I know, his donation is the largest contribution in the history of St. Louis,” Wittels said. “I think his contribution is a reflection of his and his family’s commitment not only to the JCC now but also to securing our future. When Michael Staenberg first started thinking of his contribution, It was not even close to what it is now. He really stepped up to the plate.”

Improvements at the JCC Camp Sabra location in the Lake of the Ozarks were completed in 2006.