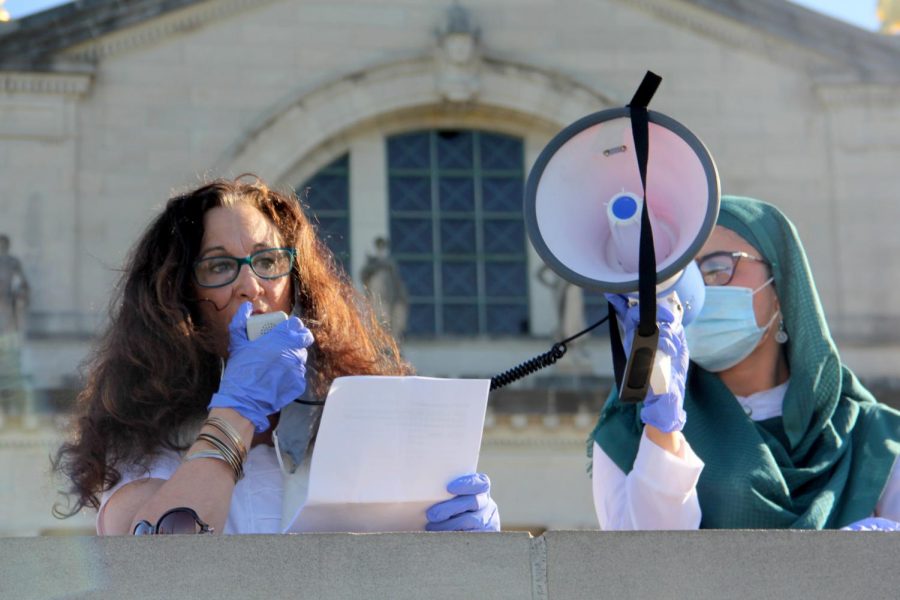 At this vigil, the pulpit was the top of Art Hill in Forest Park.

The surroundings were different than other gatherings of clergy from various faiths after mass shootings and other tragic events in recent years, but Rabbi Susan Talve of Central Reform Congregation remained as the familiar representative of the local Jewish community.

As Talve and other faith leaders spoke Thursday evening, more than 200 socially-distanced people looked up from the grassy slope and later kneeled in silence for eight minutes and 46 seconds, the amount of time that then Minneapolis police officer Derek Chauvin had his knee on George Floyd’s neck last month before Floyd died.

That pause already feels like something of a ritual because of the incredible number of gatherings in recent weeks aimed at spurring law enforcement reform and ending what has been described as systemic racism.

Talve, who was a regular presence during the 2014 protests in Ferguson after Michael Brown was killed, has thus far during the coronavirus pandemic, taken a cautious approach and avoided large protests to ensure that she is able to remain healthy and care for her family.

But she showed up Thursday, and as she stood near the statute of Louis IX, commonly referred to as Saint Louis, she spoke of both historic and current injustices.

Talve called Louis IX the “killer crusader who burned books and stole lives and souls as he hid behind his self-serving certainty.”  She also cited the Dred Scott decision, a U.S. Supreme Court case that originated in St. Louis, in which the court ruled that people of African ancestry could not claim citizenship in the United States.

“Standing under the statue of St. Louis … (and) under the shadow” of the Scott decision that “made some of us count as less than a whole human being, failing to remember that 10 million black Africans were stolen from their homes and brought as property to build this country by sacrificing their very lives,” Talve said. “And we are still standing, God, still standing under the culture of profiling and policing and poverty that shames and demeans and demoralizes some for the sake of others.”

Talve also made what appeared to be a reference to President Donald Trump, who drew criticism recently after law enforcement officers used tear gas to clear protesters so that he could do a photo session, holding a bible, at a church near the White House.

“It’s time, God, to let them stop using your holy texts in vain for false claims and photo ops, for we, people of faith, call you by many names, we call you out tonight like Hagar,” a servant of Sarah who bore Abraham’s child, Ishmael, “did, desperate to save her son. We call out to you to strengthen our resolve to fill the streets with cries for justice and accountability and models of law enforcement that serve and protect us all,” Talve said.

Gail Wechsler, a CRC member, attended the vigil because she, like many others, is upset over the deaths of Floyd, Ahmaud Arbery and Breonna Taylor, two other black people killed in recent high-profile incidents. In particular, Wechsler wanted to attend an interfaith vigil to show “that we are a diverse group of people who are outraged by what has been going on in terms of policing,” she said.

“I just think we should be supportive; it’s part of the Jewish community’s tradition to really fight for social justice,” said Wechsler, who directs the law library in the Civil Courts Building in downtown St. Louis.

A number of other Muslim and Christian clergy also spoke, including Rev. Darryl Gray, secretary of the Missouri Democratic Party, who has also been a leader in recent protests against alleged police brutality.

“Lord God, we are gathered here, people of many faiths and cultures and traditions, people of different genders and colors and creeds, people, Lord God, of different social, educational and political backgrounds and in spite of our differences, Lord God, we come gathered as one humanity,” said Gray. “We come before you now, Lord God, because duty calls us to do so. We come in remembrance of those whose lives have been lost senselessly and needlessly. We are reminded, Lord God, of George Floyd. We are reminded of Breonna Taylor,” who was shot and killed by police in her apartment in Louisville, Ky. “We are reminded, Lord God, of so many other names — too many to mention — killed senselessly.”

“God be with you,” Sidiqi said. “And may peace be in your heart and in your life.”