In a season of emerging talents, Cardinal Nation shouldn’t forget about Edmundo Sosa 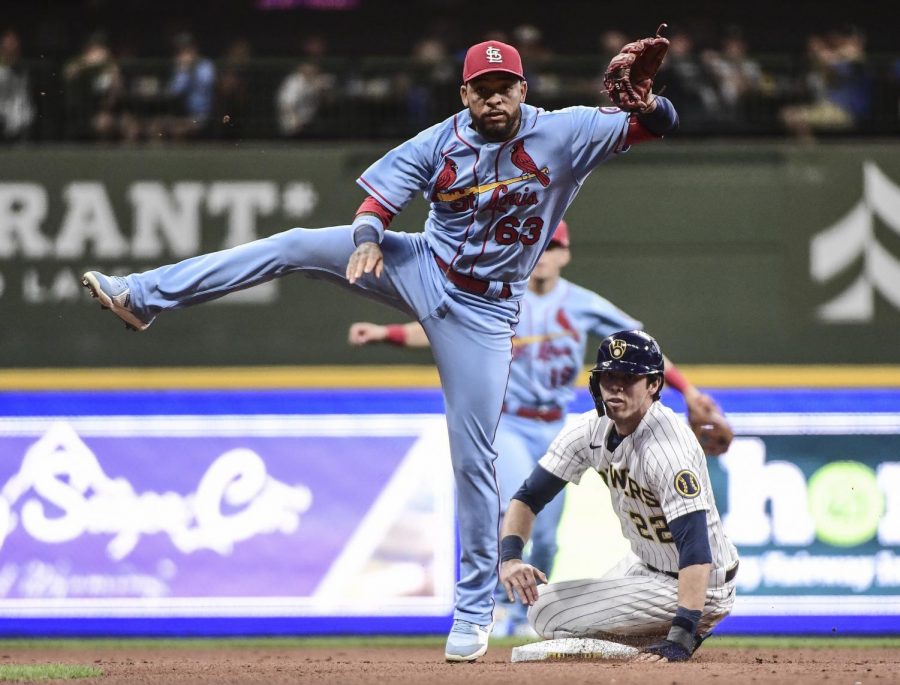 Like most minor leaguers, Edmundo Sosa saw his 2020 season eliminated. Due to the onslaught of COVID-19, MLB commissioner Rob Manfred essentially canceled the minor league season. Few would imagine, even Sosa himself, that he would transform into the everyday shortstop that the St. Louis Cardinals are leaning on during a history-making September playoff surge just a year later. But baseball is funny like that, just ask the guy he replaced: Paul DeJong.

DeJong entered the 2021 season with his starting job at shortstop intact, even if the past couple seasons diminished his overall value considerably. Once a power threat with big defensive ability who has seen his performance diminished by strikeouts, DeJong’s quality had been trimmed down to the occasional long ball pop along with serviceable play in the field. On occasion, earlier this season, manager Mike Shildt would bat DeJong and Matt Carpenter, a couple hitters hanging around the .200 average mark, in the middle of the lineup. Enter Sosa into the equation.

The 25-year-old first saw considerable playing time in mid-May, taking over for DeJong when he fractured a rib. For the next 21 games, Sosa would slash .293/.369/.400–not too shabby for a guy who hadn’t seen consistent playing time since the minor league season ended in Aug. 2019. While he didn’t offer the home run power of DeJong, he brought the Cardinals a unique form of energy every time he touched the field. In addition to sound defense and unbridled speed on the base-paths, Sosa embodied the “next man up” mentality, filling in at third base, second base, and even the outfield when DeJong returned in mid-June.

Let’s not forget Edmundo Sosa playing every day. No disrespect to DeJong, but he has been an empty spot in the batting order and fine but not exceptional defense. This would not have been enough without the bullpen upgrades.

Two months later, Sosa officially stole the position. In a stretch of play starting on Aug. 14 up through last night’s thrilling 10-2 win over the division-leading Milwaukee Brewers (32 games), Sosa compiled a .327 batting average to go with a .393 on-base percentage and .500 slugging percentage. Once he found a way to be consistent with the bat, DeJong’s trip to the bench was sealed. The Cardinals became a better team as a result of the switch.

While the increased offense aided Sosa’s emergence, it’s the trusted defense at one of the game’s toughest positions that has triggered conversations about his role next year. While Harrison Bader’s chutzpah has enabled him to save the Cardinals a team-leading 19 runs on defense, Sosa’s play at shortstop has saved eight runs at shortstop alone. But an even better stat found on his Fangraphs page is rPM, a.k.a. the amount of runs saved above average. According to the Fielding Bible, Sosa is a +10 at shortstop this year. Factor that glove-work into an infield already packed with Gold Glovers Nolan Arenado and Paul Goldschmidt, along with Tommy Edman at second–and you have Major League Baseball’s best defense.

Sosa’s work with a bat shouldn’t be slept on. He has contributed eight doubles, six home runs, and four triples to go with four stolen bases and 76 hits. Few will write home about a .745 OPS, but Cardinal Nation should eat up that .273 batting average and slick .346 on-base percentage. Also keep in mind he has only started 70 games on the season. It wasn’t until full-time duty, unaffected by injury, where Sosa really took off at the plate.

Look at a pivotal four-game set in Pittsburgh in late August. Sosa went 2-3 with a home run in the disappointing 11-7 loss, but it was the game two days later where he erupted. In a 13-0 St. Louis victory, Sosa went 4-6 at the plate, driving in five runs with two triples. He gives a team a versatile element that should threaten other teams. When Sosa starts, the Cardinals are 42-29.

Back in June, the Cards had two feet inside the upcoming free agent shortstop market. But due to Sosa’s play, there may be a few more internal discussions. That’s what we call an impact. In a season where many players have emerged-Tyler O’Neill, Carlson, and Edman among them-it’s been Sosa who has caused the most surprise with his play. That’s not bad work for a guy who didn’t even get to play regulated baseball last year.

What Sosa has provided the Cardinals is a viable option at shortstop if they decide to go pitching-heavy this winter-but he’s really given them the prospect of a different kind: Someone who can do what’s necessary at any given time. That’s an asset. He also gives them someone who can invent a unique handshake for each player and coach in the dugout.

You get a handshake!

You get a handshake!

Edmundo Sosa came into 2021 with little certainty of his future. He exits with a sure job for next year’s club. But just wait and see what he does in October.