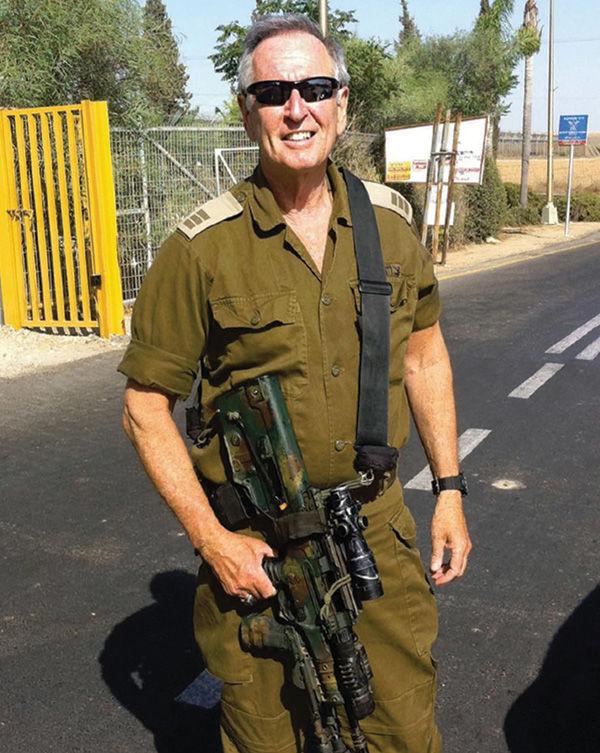 Dan Gordon will discuss his more than 40 years with the IDF, as well as his Hollywood screenwriting career at an Oct. 9 event.

BY ROBERT A. COHN , Editor-in-Chief Emeritus

Dan Gordon, an Israel Defense Forces veteran of several wars, a Mideast peace negotiator and the author of 15 Hollywood films, will be the featured speaker for a B’nai B’rith St. Louis program Sunday, Oct. 9.

In addition to his success in film, Gordon has served for more than 40 years as a soldier with the IDF. He was drafted in 1973, serving in the Yom Kippur War, and has worn the IDF uniform ever since, including in the Israeli Air Force, and as a sniper and squad leader in an armored infantry reserve unit. He also served in Operation Defensive Shield during the Second Intifada, the Second Lebanon War, and conflicts in Gaza in 2008-2009, 2012 and 2014. Most recently, Gordon began serving with one of the IDF’s elite combat units, the Givati Brigade, the most highly decorated of the last Hamas/Israeli war.

In the pre-Oslo Accord period, Gordon co-authored a Mideast peace plan and met with the leaders of Egypt and with Saudi Arabian King Abdullah, the late King Hussein of Jordan, and with Shimon Peres and Benjamin Netanyahu.

Gordon also has written extensively on Mideast affairs and counter-terrorism for the Huffington Post, Breitbart News, and many European and American broadcast and cable news outlets.

The Jewish Light caught up with Gordon for an interview during his jam-packed travel schedule.

You have an amazing background in both film and the Israel Defense Forces. Which of these two major interests in your life gives you the most satisfaction?

There are perhaps one or two things in the IDF about which I can’t really say much, which are the most significant things, outside of my children, in my life.

Older movies about Israel, like “Exodus” and “Cast a Giant Shadow,” depicted the Jewish State in heroic and always positive terms. Have Israeli films recently gone too far the other way with screenplays increasingly focusing on the negative?

Zionism is, I am afraid, out of fashion in film. I’m hoping to change that with “Day of the Dead,” which is, I think, an accurate portrayal of modern day Israel and the IDF.

Israel as a country and the IDF both have their faults. However, I believe Israel’s military is the most moral and does the most to limit civilian casualties in the world. And for a country that was founded in large part by Eastern European socialists, whose earliest memories were of Czarist Russia, Israel’s democracy is nothing short of miraculous.

You have participated on the field of military battle and in diplomacy, and co-authored a Mideast peace plan. Do you think there is any realistic hope that a two-state solution can still be achieved?

I believe that the realities of the region, namely the Iranian-Shia push for regional hegemony, have largely ended the greater Israel-Arab conflict. I believe that Israel should immediately grant de facto recognition, though certainly not de jure to the Palestinian state existing under Hamas in Gaza and say, “You wanted a Palestinian state? You’ve got one.” How does it look? Does anyone think the world needs another one like it? It is in a self-declared war with Israel. Does anybody see Israeli Arabs rushing the border to become part of this Palestinian paradise?

Among the many leaders with whom you have met is former Israeli President Shimon Peres, who has held nearly every position in the Israeli government since the days of Ben-Gurion. He is now recovering from a stroke. What is the significance of Peres to the image and respect accorded to Israel?

The best of the (old) European socialism is exemplified by Shimon Peres. Peres is the last of his generation of Israel’s founding leaders. I’ve had the privilege of knowing him and working on a few projects dear to his heart.  His achievements, in so many areas, will far outlive his current pro-Islamist detractors.

Do you think the U.S.-Israel arms package that has been signed this month will turn U.S.-Israel relations in a positive direction?

The U.S.-Israel relationship is strong and based on shared values and a joint effort against common enemies. No country on earth is so deservedly loved as America is by Israel. No country is more deserving of America’s firm friendship and commitment than is Israel. The new agreement has both pros and cons, but the relationship is the most mutually beneficial one which each country possesses.