Hundreds of St. Louisans rally to show support for Israel 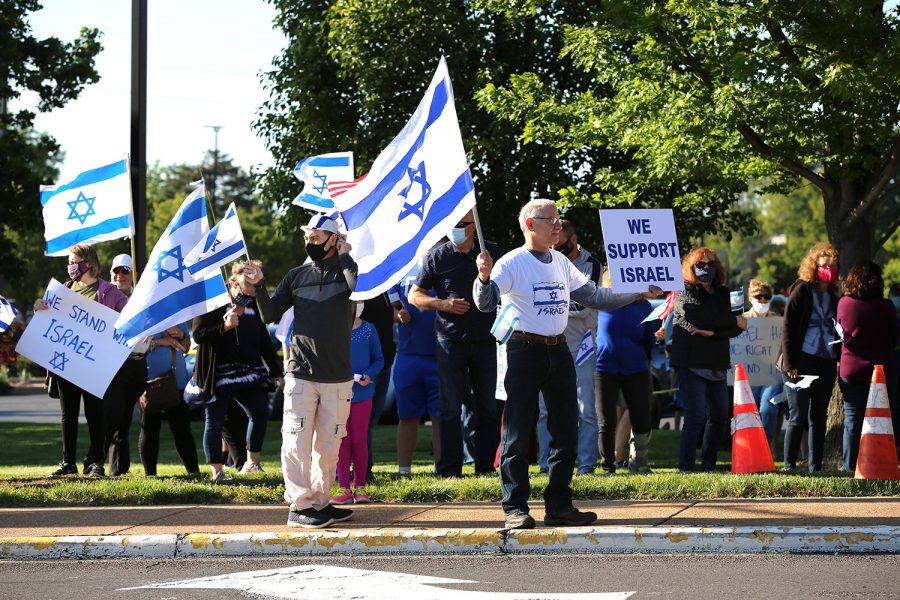 Several hundred St. Louisans gathered for a Stand With Israel Rally on May 12 on Schuetz Road outside the Jewish Federation's Kaplan Feldman Complex. Photo: Bill Motchan

Itta Boyko, principal of H.F. Epstein Hebrew Academy, said she came to the “Stand With Israel Rally” to “show our support of Israel.”

Richard and Michelle Goldstein said they went to the rally to make sure there were enough people to send a message of support to the St. Louis community.

“Since it was kind of a last-minute thing, I wanted to make sure the Jewish community was well represented,” Richard said.

As of Wednesday night, JTA reports that Hamas rocket fire has so far killed seven Israelis since Monday, when clashes in Jerusalem erupted into Israel’s first major conflict with Hamas since 2014. Israeli retaliatory bombings have killed at least 65 people in the Gaza Strip, including several top Hamas officials.

Galit Lev-Harir is a representative of the Israeli American Council – St. Louis Chapter, which planned the rally, as well as co-president of St. Louis Friends of Israel. She said the rally in St. Louis — and similar rallies organized around the U.S. — were intended to give a visible display of support for Israel.

“The goal is to show the St. Louis community that we are here to support Israel,” Lev-Harir said. “It all came together with less than a day of planning — actually we started planning it a little after 4 p.m. on Tuesday.”

A peaceful, organized and loudly singing group of Israel supporters lined the sidewalk along the north side of Schuetz Road for an hour. Across the street, about a dozen Palestinian supporters stood in a mostly silent counter-rally. Jewish Federation security personnel and St. Louis County Police were on hand to ensure the event was safe.

Marc Jacob brought his son Davi to the rally because he wanted to lend support.

For Israeli expat Orly David Peters, the missile attacks in Israel are deeply personal. Her mother Hanna, featured in the Light last month, is now back home in Israel.

“Whenever there’s a siren, they go to the safe room, and we have a group text so we know everyone there is safe,” Peters said.

Bobby Faurenglas, a resident at Covenant Place, walked from his apartment to the rally because, he said, “For me—I’m a Jew. It was a no-brainer.”