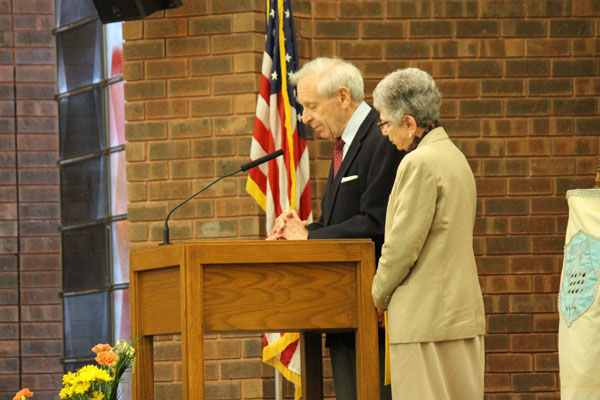 Somber songs, solemn prayer and testimony from those who had seen the horrors of the Holocaust all marked the community’s annual commemoration of Yom Hashoah Thursday night at Congregation Shaare Emeth, which was attended by close to 700 people.

In addition to remarks, music and a procession of Torahs discovered in Czechoslovakia after the war, the evening’s events also featured a tribute to Leo Wolf, who passed away earlier this year. Wolf lost numerous family members to the Shoah and, once in St. Louis, he would become a driving force behind the creation of the local Holocaust Museum and Learning Center.

“Leo, along with other pillars of the community, Tom Green and Bill Kahn, worked tirelessly to build support for the museum,” said Kent Hirschfelder, chair of the HMLC. “If a potential donor was hesitant, Leo would share his Holocaust testimony including the numerous times he barely escaped with his life.”

Wolf’s widow Sara was among those who lit candles in memory of the tragedy. To symbolize solidarity with victims of other mass killings, the seventh and final candle was lit by Lisa Bedian, chair of the Metro St. Louis Committee for the Commemoration of the Armenian Genocide Centennial.

“Let us pray that the light of this candle, together with our six memorial candles, will inspire us all to take action to end the genocide that is occurring throughout the world community today,” said Dan Reich, HMLC curator and director of education.

Interviewed before the program began, Reich said that about 100 survivors remain in the St. Louis area.

“We appreciate the survivors who are willing to share what they went through, especially with younger people who can hear these stories from people who experienced these events,” he said.

Vera Emmons, chair of the Yom Hashoah Commemoration Committee, said that survivors continue to provide a vital firsthand link to the tragedy. She noted that about 34,000 visitors come to HMLC each year to learn what happened.

“I hope that people will bring away lessons of what they can do to make sure this never happens again,” she said during an interview before the event. “That’s the phrase. ‘Never again.’ Yet, it has happened again and I think we need to be constantly watching and listening for that.”

Testimony was provided during the event by several speakers including Fred Ashner and Eva Susskind Ashner. Both were born in Germany. Fred’s family fled to the Netherlands but was eventually deported to Bergen-Belsen. He came to America in 1949. His future wife Eva had arrived the previous year. She’d seen the horrors of Kristallnacht, which pushed her family to leave for the Philippines where her father would eventually be killed.

Descendants reciting survivor histories included Jacob Kohn and Lory Cooper, grandchildren of Lenke and Simon Kohn who spoke about the grisly fate that awaited Simon’s three brothers who survived the war only to be murdered during a Polish pogrom.

“The Polish Home Army — abbreviated as the AK — were brutal and merciless,” said Cooper. “Even after liberation, the cruelty and bloodshed did not stop.”

That was a fact confirmed by Michael Kuelker, a professor from St. Charles Community College who spoke to the audience regarding the Kielce Pogrom, a 1946 killing spree that left at least 42 dead in southern Poland at the hands of not just civilians but also police and soldiers. The violence was touched off due to false rumors that a gentile boy had been kidnapped by Jews.

The incident was one of a number that troubled the region as residents retained longstanding anti-Semitic views well after the war’s close.

“After liberation, survivors were forced to deal with physical and psychological consequences of the horrors they had endured,” said Kuelker. “Most Jews were uncertain where to go and hesitant to return to their pre-war homes. They had lost family and property and were apprehensive about how they would be received by their former neighbors.”

Not all the participants in the commemoration event were Jewish. James Burney, grandson of Chaplain Darrell Kenneth Wolfe, read a letter that Wolfe wrote to his wife recounting the sights he saw upon liberation of a concentration camp near Hamburg. After describing heaps of corpses, most of whom had apparently starved to death, Wolfe was disgusted.

“Up until this week, I’ve had a little bit of conscience when we took over German homes and property to use for ourselves. Now, I don’t have the slightest pangs,” he wrote noting that the German population must have known of the atrocities.

Wolfe’s daughter Susan Burney said that what he saw had a huge impact on her father though he rarely talked of it until the end of his life. However, its effects could be felt nonetheless.

“He lived his life remembering it and making sure that our family met people from other nationalities, other races, other abilities and accepted them,” she said during an interview before the event.

To Rachel Miller, the day is always meaningful — but never easy.

“It’s also very painful – remembering. I lost my whole family,” said the Chesterfield resident, interviewed as she handed out flowers to passersby outside the Shaare Emeth sanctuary. “I’m the only one who survived so it makes it very difficult.”

Miller, who will turn 83 this month, was born in Paris, the child of a Polish family who thought they could escape the rising tide of Nazism in France. She eventually took refuge in a convent living out the war as a “hidden child.”

Miller, a founder of Shaving Israel, a local effort to help Israeli soldiers, said that she wants to be hopeful about humanity’s ability to learn the lessons of the Holocaust though optimism can be difficult.

“We said never again and it just doesn’t stop. It’s continuous,” she said. “Look what’s happened in the African countries. Look at what’s happening in Syria, Afghanistan. It’s just awful…It’s horrific. There are really no words in the dictionary to describe it.”

Interviewed after the program, survivor Mendel Rosenberg, 87, described his own losses in the Shoah.

The Kol Rinah congregant said he was gratified to see so many had turned out to honor survivors and learn more about the events which shaped — and destroyed — so many lives.

He hopes that the planet can learn from its experiences.

“We can’t sit back and do absolutely nothing when so much is going on in the world,” he said. “We’ve got to do something about it and try to stop all the killings that are going on. We went through all the killings. We don’t want to see it again.”