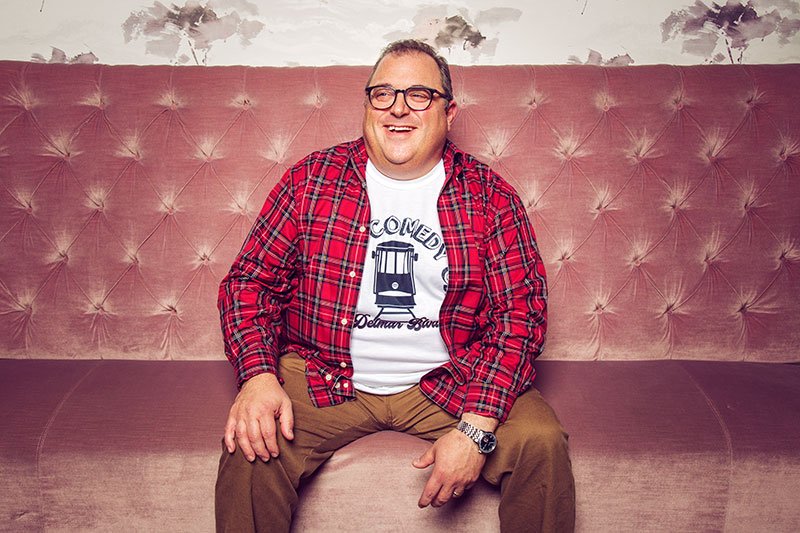 Comedy will always be required, especially in the worst of times. As a deadly pandemic raged across the world a year ago — taking hundreds of thousands of lives — Yale Hollander looked for new ways to make people laugh. Take what’s given and make something out of it. What he found were virtual ways to continue a passion that started on stage and has now made its way into the virtual world.

The Congregation Shaare Emeth lawyer-turned-comic/lawyer hybrid has never had a problem slinging jokes. Whether it be Helium Comedy Club in Richmond Heights, the now-closed Monocle in the Grove, or Today in St. Louis making Rene Knott crack up, Hollander has been everywhere.

Hollander’s humor is calculated and educated but never overpowering, mixing in attorney jokes and everyday adulting dad/husband adventures without losing your attention. I once shared the radio airwaves with him and remember laughing about things I didn’t previously knew were funny. In a 2017 profile in the Jewish Light., Hollander talked about finding jokes in unlikely places — taking stand-up comedy into places where it wasn’t expected, but sure was needed. One of those places happened to be the now-defunct Loop Trolley.

In a wide-ranging interview, we talked about that debacle and a few other things about Hollander’s rise in the industry, and the respect he has for his fellow comics.
For a comedian, what’s the silver lining of a deadly pandemic?
First of all, “Silver Lining of a Deadly Pandemic” sounds like it should be the title of a Richard Lewis special. But seriously, if there’s anything to redeem from this multilayered tragedy, it’s the creation of virtual comedy platforms. A handful of enterprising comics — Rachel Rothenberg in Salt Lake City and Niko Lukoff in Boise in particular – created open mics and showcases on Zoom as well as vast comedian networks on Facebook that have brought comics of all skills from all over the world together. Even I got into the game, taking my Coffee Break showcases online. Through these networks, I was able to book some pretty big-name comics like Ophira Eisenberg (NPR’s Ask Me Another) and Jenny Zigrino (Comedy Central) to headline.

Plus I got to meet some pretty incredible comics whom I likely never would have encountered without touring or getting into national festivals. Plus, having an abundance of open mics on which I could perform from the (relative) comfort of my basement allowed me to continue writing and workshopping material, and that’s kept me in pretty good performing shape as I’ve returned to performing live on stage.
What COVID-19/pandemic jokes did you find landed better during the first shows after things started reopening? Which ones soured?
Last question first. Although my material really isn’t very political, I was doing some material on the virtual mics that was poking fun at Missouri Governor Mike Parson and my opinions on his handling of the crisis in its early days. I also had a bit ridiculing the folks who were boycotting Chinese takeout based on their perception that the pandemic is China’s fault. I don’t think I would have done either of those bits in front of a live audience because you never know who’s going to get riled up and ruin the show for everyone else. All of that being said, I have a pretty involved bit on the topic of the recommended practice of washing hands for at least 20 seconds that has become a mainstay because it has played very favorably at live shows. I can see keeping that one around for a while.
Your career started in law but made its way to doing comedy on a trolley rolling through the Loop. How funny exactly is a lawyer who happens to do comedy as well? Do clients hear potential jokes first?
You had to bring up the trolley, didn’t you? I mean, I guess if I’m going to have a legacy in the community, being the comic who bankrupted a tourist attraction (I cashed the check for the second, and probably last, Laugh Tracks show the night before the story broke that the Loop Trolley needed a major cash infusion to continue operations) isn’t the worst one. As far as my career goes, it’s still primarily in law, although I’m not actively practicing. I provide attorney training and quality control services to a large, international litigation firm, and my comedy skills have been very useful in keeping otherwise dry, sometimes arcane material fairly palatable.

It’s certainly a fine line to walk through. You want people to take things seriously, but at the same time not be lulled to sleep like the kids in Ben Stein’s class in “Ferris Bueller’s Day Off,” but make it too silly and people remember only the gags and not the substance behind them. And one major perk of my job is that I get to do a bit of travel during non-pandemic times, and I have had an opportunity to do some standup shows and open mics in cities where I’ve traveled for business, including several performances in the U.K. That sure beats sitting in a hotel room watching a “Shark Tank” marathon.
What’s your go-to pre-show meal? Please tell me it’s Jewish and elaborate fully.
I try not to eat too close to showtime because I don’t need an angry set of intestines getting into my act. And some foods will cause dry mouth, which is never a good thing when you’re getting ready to talk your head off for 20-plus minutes. I like to keep things mild and inoffensive to the digestive system, so it’s usually some kind of pasta. That said, if any Bubbes reading this want to send me some nice brisket kreplach, I’d certainly be willing to incorporate that into my pre-show regimen.

“It’s crazy what you can see with your own eyes.” – Sage baseball analyst James Edmonds

Tell me about your first show and some of the good and bad of that first live experience?
Technically, my first standup performance was in 1985 at the tender age of 17. I was at Missouri Boys State in Warrensburg, Mo., and scheduled to do six minutes at the talent show. The problem was, I thought I could just get up on stage and wing it without any prepared material, just shoot from the hip about whatever I felt like talking about. This is a very bad plan in any context, but when you factor in an auditorium packed with 600 fellow obnoxious 17-year-old boys, it’s disaster fuel. I lasted about four minutes before getting booed off the stage. The only good that came out of that experience was the lesson to always prepare material, and that’s what I did the next time I got up the nerve to try standup – 31 years later.
Any advice for a novice comic?
Write, revise, rehearse, review. It doesn’t matter if 90% of what you write never makes it to the stage — even an open mic. Don’t keep ideas locked up in your head. Write them down in a notebook. And never throw old notebooks away. There’s always material, or sparks for material, to be mined from old scribbles. Be sure to go over your written stuff out loud. The delivery and flow are just as important as the ideas you’re writing down. Go back and polish your writing, experiment with different directions. And never, ever, let a single performance define you. If you bomb your first time out, it doesn’t necessarily mean you aren’t cut out for comedy. Go back and work on it. And if you slay the first time you pick up your mic, it doesn’t mean your work is done. It means you set the bar pretty high for yourself and you should work hard to slay and slay again.

Teen Daughter: I have a meeting tonight at the J East. Do you know where that is?

Me: Uh, that’s where your mother and I met.

Teen Daughter: Gross. A simple “yes” would have been fine.

What’s the one thing you need back to normal by the end of the year?
I need for everyone who is able to get vaccinated and to recognize that the only way we’re going to be able to laugh together en masse is to fight this pandemic together en masse. There is a special energy to a room that is packed wall-to-wall with folks in the mood to laugh. Plus, I’ve got a long list of fellow comics that are overdue for a hug, and that can’t happen soon enough.