How Jen Kaslow is keeping the Meshuggah vibe alive and well 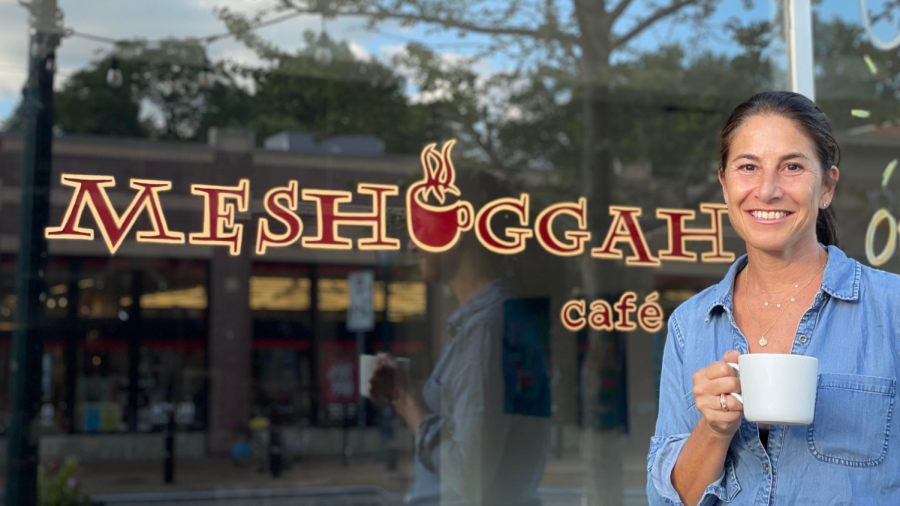 (RFT) If you want to know the special place Meshuggah Café holds in the hearts of its longtime regulars, consider the term owner Jen Kaslow uses when she recounts its history.

As owner and steward of the University City Loop institution for the past six and a half years — and a regular for roughly two decades prior to that — Kaslow is well versed in the history of Meshuggah. Founded in 1992 by two Washington University students named Jonathan and Nick, Café Chaos, as it was then called, was established on Melville Avenue as a place to gather, smoke and watch soccer.

“They were two dreaded-up hippies — free spirits who just wanted a place to congregate, smoke freely and drink coffee,” Kaslow says. “It had this really dark vibe, and people would go in there late at night to smoke cigarettes, play chess and drink really strong coffee from an espresso machine, which, at that time, hadn’t yet become a thing. It was the place in the neighborhood where all the artists and intellectuals came.”

After a few years, the original owners had a falling out; one left the partnership and the other renamed the coffeehouse Meshuggah, running it business as usual until he sold it to then-regular Patrick Liberto in 1997. Under Liberto’s watch, Meshuggah remained the subversive, dark hub for poets, writers, philosophers, chess players, clove cigarette smokers and other grunge-era characters that frequented the bohemian neighborhood. At first, he made no changes to the place, keeping the coffee strong and catering to the late-night crowd of workers from Blueberry Hill and Vintage Vinyl until one day, there was a new policy he simply had to institute.

“He just couldn’t take the cigarette smoke anymore, so one day, he put an ashtray out front and made the place nonsmoking,” Kaslow recalls. “He lost a lot of business, but he stuck to his guns and kept the vibe the same otherwise. It was still a gathering place for people to exchange ideas and hang out lowkey.”

In 2003, Liberto made a change even bigger than the smoke-free policy when an opportunity arose for him to move Meshuggah from its small, off-the-beaten-path spot on Melville to a storefront directly on Delmar Boulevard. He took the chance despite protests from longtime Meshuggah loyalists who feared the more visible location would change the essential character of the coffeehouse from a counterculture gathering place to a watered-down version of itself. Though the new digs were certainly brighter by default — the large windows in the front of the cafe simply let in more daylight — the place retained its indie vibe while broadening its appeal.

In 2015, Liberto decided to sell Meshuggah in order to move back to his home state of Louisiana. On the day he made that announcement, Kaslow happened to stop in the shop, as she did nearly every day on her way to work, and heard the news that would change the trajectory of her life.
Read the full article on Meshuggah’s on Riverfront Times

This excerpt was published with permission from the Riverfront Times.