‘How do we create some kind of peace?’ 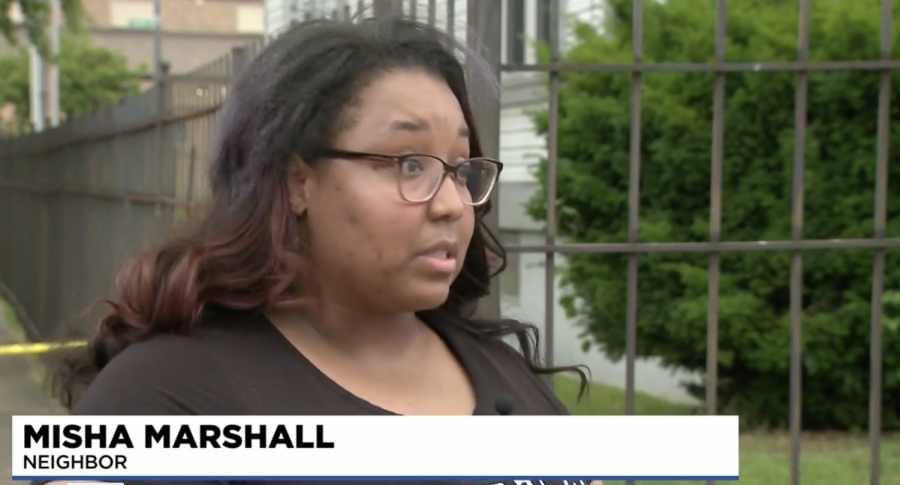 A KMOV reporter interviewed Misha Marshall in the aftermath of a shooting in her neighborhood. PHOTO: SCREEN CAPTURE FROM KMOV WEBSITE

This story — the second in a series — was produced in partnership with the Pulitzer Center and is part of Before Ferguson Beyond Ferguson’s 63106 Project. A team of journalists have been following families in the ZIP code during the time of COVID. A study has shown it has the most problematic social determinants of health in the region.

Misha Marshall finds a body on the street near her home. She prays he is still alive.
On a late spring Sunday like any other, Misha had driven home from the grocery store. Oddly, this time, Misha found that her typical route home was blocked with emergency vehicles. A resident of downtown’s Columbus Square neighborhood, Misha took a different route.

“Never in a million years would I have thought that when I got closer that someone had been shot,” she said. “And then I’m thinking, well maybe it wasn’t a bad shooting. Maybe he’ll be OK.

“And then I got to the house, went in and then I went back outside because I wanted to know what happened. And the police were just taping the crime scene off. And, I said, ‘Well, what happened? Is he OK? Are they working on him? And, they were like, ‘Well we don’t know.’ But this person was not moving.”

For the KMOV news crew, it was a compelling sound bite and few seconds of video to go along with the images of the crime scene. A report would go on to recount the shootings of eight individuals — nearly all of them teenagers — on the weekend of June 5-6 in St. Louis.

(As it turned out, the victim Misha saw was William Neering, age 37.)

Crime is not a novelty in the Columbus Square neighborhood. Columbus Square is bounded by Cass Avenue to the north, I-70 to the east, Tucker and N. 13th Streets to the west and Cole Street to the south. In the first half of 2021, police recorded four murders and 25 aggravated assaults, in a community with 2,000 residents.

And yet, to Misha, 38, and her family — which includes her younger sister, Maya, her two children Jacobi and Maleah, and her parents, John and Cathy Marshall — this summer’s crime wave came as a shock. The Marshalls have lived in Columbus Square for more than two decades since Misha was in high school. John and Cathy are among the few residents in the neighborhood who own their own home.

John, now 76 and retired, remembers having to practically do handsprings to get a bank loan even though he had a good job at the Mallinckrodt Chemical Co. plant about two miles away. John used the loan to buy two units, and then combined them into a single home that is two stories with five bedrooms.

It was only last fall that Misha was saying she felt safe in her immediate neighborhood, though she added she wouldn’t be “riding around with my windows down and my car unlocked at 2 o’clock in the morning.”

But with a homicide occurring only several steps from her front door, she has started to reconsider, asking herself: “What is happening?”

Though Misha has lived most of her life in Columbus Square there was a time when she lived in the Central West End, in a safer neighborhood. Her home was in the city’s 28th Ward then represented by Lyda Krewson, who would go on to become mayor.

Safer perhaps, but uncomfortable.  Maleah and Jacobi were only toddlers then and loved spending time at the neighborhood park across from their home. Misha noticed that cars would zoom past at an alarming speed. Misha remembers asking Krewson about the possibility of adding a speed bump next to the playground. Instead of expressing enthusiasm for the idea, Misha said Krewson responded: “We won’t be putting a speed bump over there. You just need to keep a better eye on your kids.”

Misha was taken aback. “You can watch your kids all you want, and someone can still hit them if they’re not stopping at a stop sign,” she said.

(I then called Krewson, who stated that she had no recollection of the conversation but was apologetic that Misha left feeling as though “her needs were not being met.”

As a mother, Krewson stated that she understood wanting to keep your children safe. “I’m sorry that she felt like I didn’t take it seriously… I can definitely understand the problem.”)
Krewson lost a voter that day many years ago. It didn’t keep her from getting elected mayor in 2017 in a close race with Tishaura O. Jones. But now Jones is the mayor and that gives Misha some hope. “I’m excited to see an African American woman lead our city,” she said. “I feel like she’s going to do amazing things.” She finds hope, too, in the Biden administration’s effort to focus more attention on marginalized communities.

“I feel like we’re finally headed in the right direction as long as we continue to unify, work together, and do what we need to do as a country. [I’m tired of] living in two divided Americas.”

The transition from Trump to Biden also signaled a change in public health measures concerning the pandemic. Misha is a medical technician and saw how COVID-19 landed unevenly on marginalized communities and at the clinic where she worked. But then quite suddenly it hit home.

One April evening, Jacobi came home from his valet parking job feeling fatigued. With only one look at him, Misha knew something was wrong. “Jacobi, I think you need to go get tested,” she said.

They drove to an urgent care facility downtown. Within 15 minutes of their arrival, they learned Jacobi had tested positive for COVID. Given Jacobi’s age, 21, Misha figured he could simply stay quarantined and cope quite easily.

But the next day Jacobi woke up with more symptoms, muscle aches, loss of taste and smell, a high temperature, and, worst of all, trouble breathing.

Each day, Misha double-masked, double-gloved, and donned protective goggles to take Jacobi’s vital signs. She checked his temperature, respiration and heartbeat. His temperature tended to fluctuate, one day 103+ and the next 99. His breathing grew more labored, so much so that he could barely speak. His heart was racing as if he had run a marathon.

As the days passed without Jacobi getting better, she took him to the hospital. She found some reassurance when staff members told her Jacobi simply needed to rest and continue taking his medicine. He would not need to be admitted.

With two elderly parents and a disabled sister at home, helping Jacobi recover without putting anyone at risk was no easy feat for Misha. Jacobi had to deal with his own fears, not just for himself but for his grandparents. “I can’t imagine life without my grandparents… If they were to leave this world before God intended, it would be very upsetting for me.”

So the family went above and beyond to keep everyone safe. Any time Jacobi left the house for health checkups, Misha required that he used the back door of the house; the front door was closer to her parents and sister. Anytime he left his room, Misha wiped down each surface that he touched. All that rigor took a toll on Misha mentally and physically. But, Misha said, “He made it… And then it was almost like it didn’t happen.”

Before Jacobi’s diagnosis, Misha had intended to wait a while longer before pursuing a COVID vaccination. But after seeing Jacobi’s crippling illness first-hand, Misha decided to get vaccinated immediately. Maleah and Jacobi are now vaccinated as well. John, Cathy and Maya remain unvaccinated as they remain at home almost all the time.

Maleah initially was on the fence about the vaccine fearing side effects. But now says, “It’s for the protection of me, my family, and the people around me. Now, I can spend more time with my family, and I don’t have to be so isolated.”

As a healthcare worker, Misha is concerned about the patients she sees on a daily basis. Many are unvaccinated. “Some people feel like this is fake. And then you also have people, again, afraid of the unknown,” she said. It’s going to take some time for us to get where we need to be.”

Hoops and firepits
With so much uncertainty, Misha has resolved to set a course for her own future.  She wants to pursue a nursing degree, a goal she has put off again and again to care for others.

“I want to hurry up and get done with nursing school so that I can work on my own terms, do my own thing, my own way, and be able to take care of my sister,” she said. “I want to do things the way I want to… without having to jump through hoops and firepits.

“I’ll be in school come January 2022, rain or shine, whatever I gotta do. If that means I got to be on the corner selling cupcakes and cookies and cake and pop… that’s what I’m going to do. I love what I do and I love my patients and my families, but I want more for myself. By helping myself, I can learn to serve them better.”

Leyla Fern King is one of several storytellers for Before Ferguson Beyond Ferguson, a non-profit racial equity storytelling project. She is an alumna of John Burroughs School, and Cultural Leadership, a St. Louis-based program that brings together Jewish and African American students to learn about and address systems of oppression through the study of African American and Jewish history. King is currently a freshman at Indiana University.