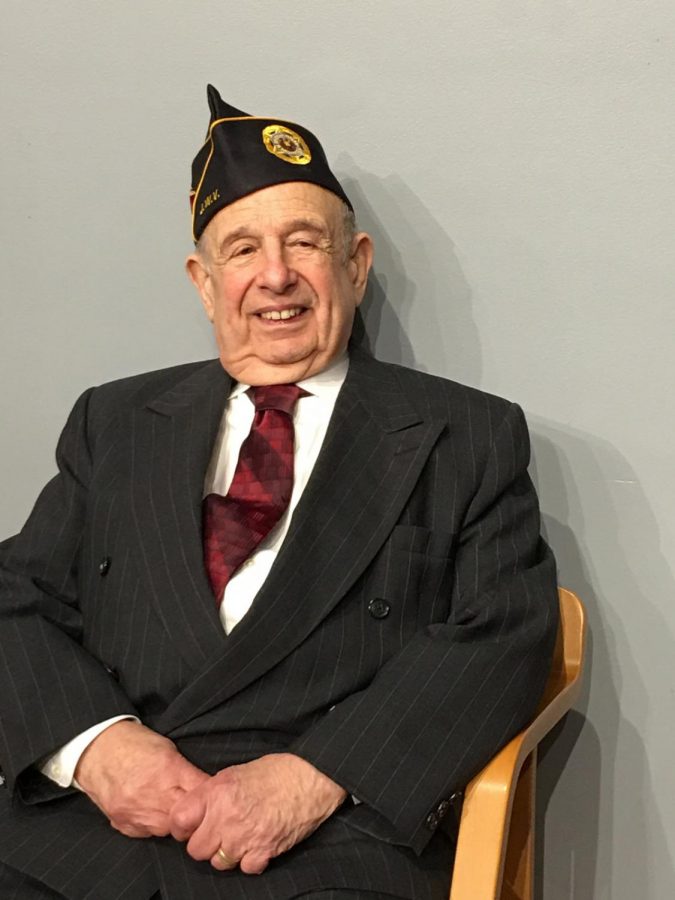 To hear the story of the World War II experiences of Guy Stern, who escaped Nazi Germany as a teen, graduated from high school in St. Louis, enlisted in the U.S. Army and became part of the famed “Ritchie Boys” unit that interrogated German POWs after the Normandy Invasion, one is tempted to say, “They ought to make a movie about your life.”

In fact, one documentary film about his celebrated unit has already been made—and was a hit at the St. Louis Jewish Film Festival a few years back—and another film is in the works.

Stern, an amazingly vigorous and physically fit 97-year-old was in St. Louis last week, where he was an honored guest and speaker at a workshop organized at Washington University on “The Legacy of the Refugees in Exile (1933-1945).”

In an interview with the Jewish Light, Stern explained that his uncle and aunt, Benno and Ethel Silverberg, provided him with an invitation to come to St. Louis to escape the certain death he would likely have faced otherwise. He was 15 years old at the time.

Stern arrived in St. Louis in 1937 and enrolled at Soldan High School, from which he graduated in June 1939. He attended St. Louis University until he was drafted into the U.S. Army after Pearl Harbor brought the United States into World War II against the Axis powers of Germany, Italy and Japan.

Stern said that he tried very hard to obtain papers for the rest of his family to come to America and “almost succeeded, but in the end it did not work.” His entire family was trapped in Nazi Germany and all perished in the Holocaust.

Stern was born in 1922 in Hildesheim, Germany. Once he obtained his papers he came to St. Louis, he was welcomed by his uncle, who was a pastry chef. Silverberg was able to find busboy jobs for Stern at various local hotels, where he learned the value of a steady salary and also improved his already strong language skills. Stern said he remains grateful to his St. Louis relatives and continues to be a loyal St. Louis Cardinals fan. Accompanying Stern during his St. Louis visit was his cousin, Bob Feigenbaum, a former longtime member of the Missouri House of Representatives.

Stern’s language skills would prove to be a timely and extremely valuable asset to the young soldier. After a fast-track basic training program, he received secret orders to transfer in 1943 to Camp Ritchie, a military intelligence training center at a hidden site in the foothills of the Blue Ridge Mountains of West Virginia.

Stern and his Ritchie Boys comrades had two major assignments: to interview German prisoners of war, and to read and collect information from German military sources to assist in psychological warfare.

Stern enjoyed his “down time” in West Virginia, which had a lake for swimming and canoeing. Within three months, he was transferred yet again — to Louisiana for maneuvers and then to the shores of Normandy, France, only three days after the D-Day Normandy Invasion, which was the turning point against the Nazis.

Stern recalled that only a half-hour after landing, the Ritchie Boys began interrogating people. Stern was part of a six-member team. He said he played the role of “bad cop” during the interviews by pretending to be a Russian soldier. “The Nazis especially feared being in the hands of the Russians,” said Stern, “because the Soviet Union had suffered so much during the war.”

For his distinguished and valuable military service, Stern received the Bronze Star, five battle stars and the French Legion of Honor.

“We were committed to this war for personal reasons as well as ideological ones,” said Stern. “Freedom was at stake not just in Europe but worldwide, and we worked harder, both in Camp Ritchie and in he field than anyone could have driven us. It was self-propelled energy.”

It was not until he returned to America after the war that Stern learned his entire family had perished in the Warsaw Ghetto. He returned to the United States in 1945 to continue his studies and became an instructor for German language and literature at Columbia University. He later became a Distinguished Professor for German at Wayne State University in Detroit, where he resides with his wife, Susanna Piontek, an author. His universities and Germany bestowed several high-ranking awards on him.