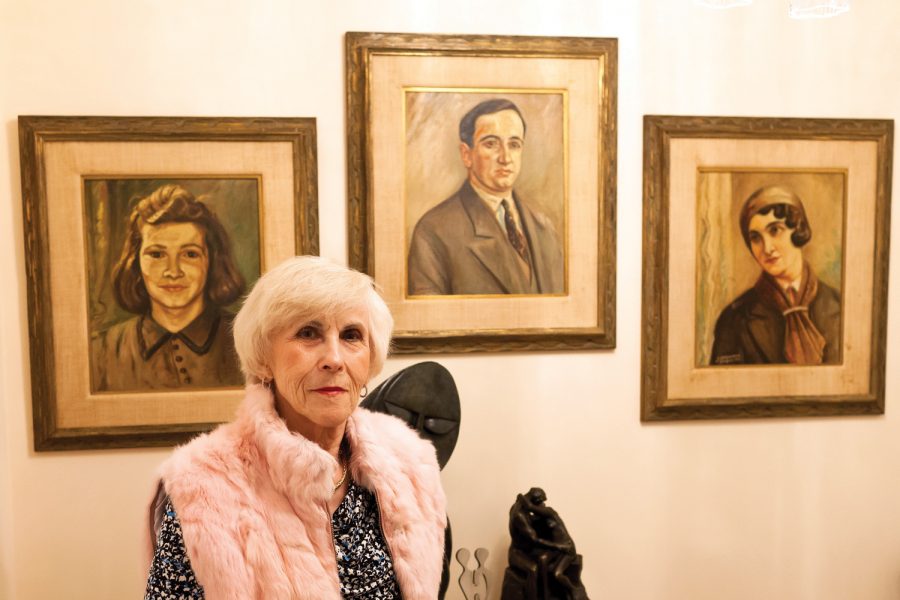 Rachel Miller at home, in front of paintings of three of her family members lost during the Holocaust— her mother, father and sister. A German prisoner of war created the portraits, working from photographs of the family. Photos: Lisa Mandel

St. Louis resident Rachel Miller, who survived the Holocaust as a hidden child, will share her story of courage and resilience at 7 p.m. on Saturday, Nov. 9 in the Women’s Building Formal Lounge on the campus of Washington University in St. Louis.

The event is free and open to the public; a light reception will follow.

Miller was born in Paris where her family moved following rising anti-Semitism in Poland. She was one of four children born to Nathan and Helen Goldman.  After Miller’s father was taken by the SS and French police, her mother sent her to a farm in the French countryside to live with a Catholic family.  Three days later, the Nazis invaded France.  Her other family members were sent to various holding camps and ultimately transported to the Auschwitz extermination camp in 1942.  After the liberation, Miller emigrated to the United States in 1946 where she lived in multiple foster homes in New York City and was reared by her father’s sister. She later married and moved to Los Angeles and then to St. Louis in 1994.

Miller has shared her story with thousands of students through speaking engagements at the St. Louis Holocaust Museum & Learning Center of St. Louis. She has also founded a local nonprofit, Shaving Israel, which raises funds and awareness to purchase personal hygiene items for male and female soldiers in the Israeli Defense Forces.