History, a father’s life emerge from ‘tunnel of time’ 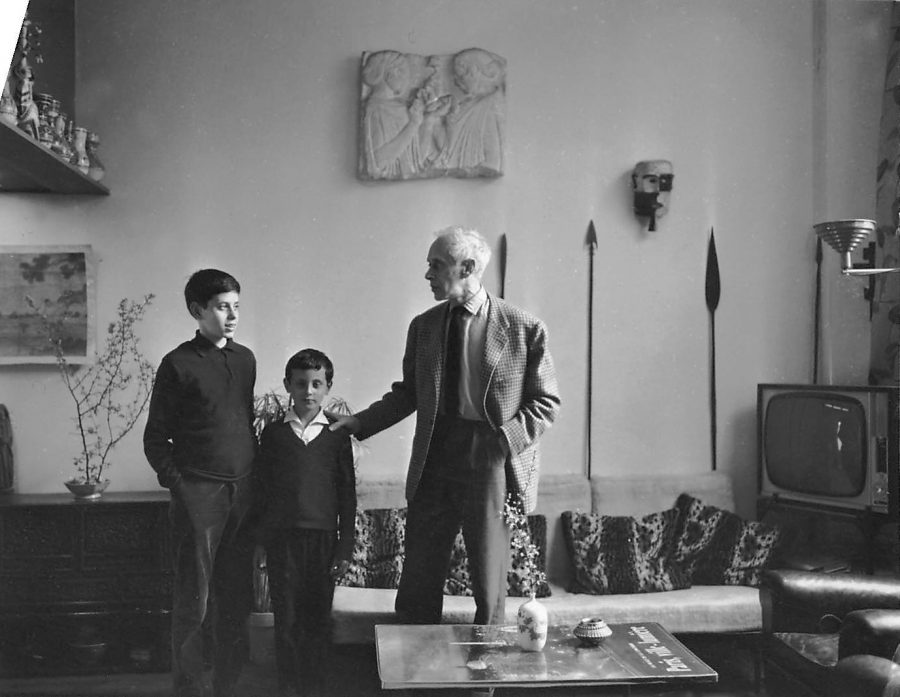 Pier Marton puts on a pair of disposable blue gloves on a weekday afternoon earlier this month, reaches into a plastic storage container and carefully pulls out rolls of film.

He places a sheet of 12 negatives under a camera, which allows him to record them digitally. One shows a picture of a young woman taken by his late father, Ervin Marton. He was part of the Paris arts scene of the 1950s and 1960s, and a Jewish member of the French Resistance against the Nazis.

He works diligently and, one after another, images that only his father, who died in 1968, had seen are revealed on a screen.

“I call it a tunnel in time,” says Marton, a former film studies professor at Washington University.

Now, after just over a month of work at his home in University City, Marton and a visiting art historian from Paris have catalogued thousands of his father’s negatives, photographs and drawings, among other work. Marton hopes to arrange a permanent archive of his father’s work and exhibit some of it in museums. The historian intends to write a book and create an exhibit about Ervin Marton.

But aside from giving the public a chance to see more of his father’s work, Marton says, the project has brought him closer to his father, who died suddenly of a brain hemorrhage when Pier was 17.

Pier Marton also suffered a brain hemorrhage about a decade ago. Now largely recovered — but more emotional, he says — he has a better understanding of his father and the notion “that time is limited.”

Ervin Marton was born in Budapest in 1912 and learned painting and sculpture in art school. He taught himself photography. Some of his work was displayed in shows and at the Hungarian National Museum, but still he felt the rise of anti-Semitism and fled the country for Paris in 1937. There, he was part of a community that included artists such as Picasso, and other Hungarian photographers who emigrated and became well known. Marton took portraits of notables such as Picasso and engaged in street photography of ordinary life around the French capital. His work has been exhibited at the Hungarian National Gallery, and a portrait of Picasso was included in an exhibit at the Museum of Modern Art (MoMA) in New York.

The French government also awarded him its Médaille de la Libération (French Liberation Medal) for his time in the Resistance.

He stayed in Paris but then a few years later had an “anti-Semitic experience in my building with neighbors” and decided to also leave the country, Marton said.

His family and much of his father’s collection lived in California while Marton moved around the country, teaching film studies at the University of California Los Angeles, the Chicago Art Institute and eventually, Washington University.

A couple of years after the hemorrhage, the head of his department at W.U. informed Marton, who was not tenured, that he would not be rehired after that academic year due to low enrollment in his classes, Marton told the Riverfront Times. His current and former students started a campaign for Marton to keep his job, and columnist Bill McClellan wrote about him in the St. Louis Post-Dispatch.

Marton had become a notable creative force in his own right. For example, his documentary “Say I’m a Jew,” about Jewish men and women born in Europe in     the aftermath of World War II, was shown at the MoMA and at the Jewish Museum in New York and earned a positive review in The New York Times.

But the students’ campaign failed. When his mother died shortly after the hemorrhage, Marton brought the boxes of his father’s work with him to his basement in St. Louis. He didn’t do much with them until he received a call earlier this year from a friend who told him that she and an art historian, Gabriella Cseh, were writing a book about Hungarian expat photographers like his father. Cseh received a grant from the Hungarian Ministry of Trade and Foreign Affairs and in August arrived in St. Louis to begin helping Marton sort through his father’s work.

She was fascinated by his time in the French art scene and in the Resistance, and by the the chance to explore this bounty of largely hidden art, said Marton, who acted as a translator.

The two operated with urgency, spending 10-hour days burrowed in boxes of art. More than 10 volunteers came and went.

As they made steady progress, Marton said, “I’m still in a shock of sorts because six months ago, I didn’t even know she was coming.”

They found, for example, shots of his father looking at the liberation of Paris during World War II,  and street scenes of Roma people outside on sidewalks.

Cseh was surprised to find a photograph of Mátyás Rákosi, a former leader of the Hungarian Community Party.

“I think we will see a lot more surprises,” said Cseh, who, like her subjects, moved to France from Hungary.

They found a nude photograph of a woman nicknamed “Bubu” whom the younger Marton had “seen for years” only in drawings, he said. She was his father’s first romantic relationship.

“Because he died when I was 17, everything that I know about him I have to decipher,” he said.

Marton has given a number of presentations at the St. Louis Holocaust Museum & Learning Center over the years. Daniel Reich, the museum’s curator and director of education, has picked up on how important Marton’s father is to him.

“In the short blurbs in our flyer, [Pier] talks about his extensive arts background, but he always, always acknowledges his father and his medal of honor from the Resistance,” Reich said.

Marton estimates he still has several months of work. After completing the first phase of digitally logging all the work, he wants to organize it into a database that allows people to cross-reference different pieces. Then he must decide where to archive the collection and continue talking with various institutions that have expressed interested in displaying the work.

Cseh left St. Louis for Los Angeles to review items stored at Yves Marton’s home and visit a gallery of Ervin Marton’s work. She will then return to Europe but hopes to come back to St. Louis and help Pier finish. She had said she wanted to finish before she left because she wanted to see “what he had done and to see what he did.  I have to see the totality of it, not just a partial work.”

The picture of Bubu is just one picture, she said, but “what happens if there are more pictures of Bubu in another box? Everything can be changed if you find something that unravels something else.”