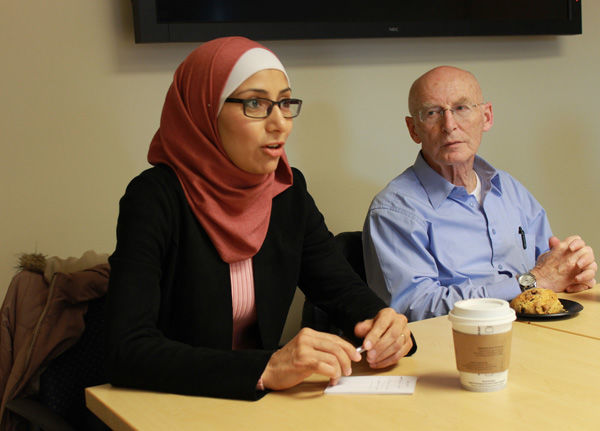 Dr. David Schnadower, a pediatric emergency medicine physician at St. Louis Children’s Hospital, told visiting Israeli and Palestinian doctors that he had recently been treating a patient with a swastika tattoo who was discussing President Donald Trump’s proposed wall along the U.S.-Mexico border.

“And I’m a Mexican Jew,” Schnadower said, generating laughter from fellow healthcare providers in the conference room at the Washington University School of Medicine.

That situation “must be so much more pronounced” in Israel and the Palestinian territories, Schnadower suggested, “so I wonder how you deal with that?”

On Jan. 31, the Israeli and Palestinian doctors stopped at the hospital, community centers and religious institutions around St. Louis as part of a trip sponsored by Project Rozana, an organization that sees improving healthcare for Palestinians as a key to achieving peace.

“When you go to the hospital, you will see this mixture of people from both sides; you will not find this different treatment or different behaviors from both sides — the Palestinians and the Israelis,” said Dr. Khadra Hasan, a pediatric hematology-oncology specialist at August Victoria Hospital in Jerusalem.

Dr. Ralph Walden, deputy director of the Sheba Medical Center in Ramat Gan, added that the medical system in Israel is “an island of goodwill and equality.”

“We have senior chiefs of departments who are Israeli-Arabs and they are absolutely respected,” said Walden, who was the personal physician to his father-in-law, the late Israeli President Shimon Peres.  “We have two directors of hospitals who are Arabs in Israel and most of the staff is Jewish — there is no problem about that.”

Still, Walden and Hasan did describe unique problems inside and outside hospitals in Israel and the Palestinian territories that affect patients’ health.

They stopped in St. Louis, as part of a tour around the U.S. and Canada, and aimed to form relationships with American doctors and raise money for Rozana trainings for Palestinian healthcare providers.

“Another part of it is that it’s the first time that people maybe hear a Palestinian doctor talking about the good relations with the Israeli side so this is an opportunity for me as a Palestinian to let people know that there are good things to hear and not just bad news in the TV,” said Hasan.

Walden said Rozana does “a lot” of advocacy to allow patients to acquire permits to travel from Gaza or the West Bank to Israeli hospitals, but he said the larger goal is providing better training to Palestinian providers so patients don’t need to make the trip.

“It’s nice for an [Israeli hospital] doctor to treat 120 patients on a given day, but if you train a Palestinian doctor in an Israeli hospital,” over the years “he will be treating hundreds of thousands of patients,” Walden told the 15 healthcare providers gathered in the conference room that morning.

Otherwise, there are often deficiencies in primary and specialty care in Palestinian hospitals. For example, “when you are taking care of diabetic patients, they are not giving fancy diabetes medications — they are just giving regular insulin,” Hasan said.

There are also often hurdles in trying to transfer patients in need of specialized care from the West Bank or Gaza to Israel.

After receiving permission “you will have patients crossing the checkpoint every day [and] delays in transferring,” Hasan said.

And in Gaza, which is controlled by the terrorist organization Hamas, there are additional hurdles, she said.

But if they are able to receive treatment at Israeli hospitals, that care from Israeli doctors can have ripple effects, said Walden, who has worked at hospitals in the West Bank and Gaza.

Palestinians may see a different side to Jewish Israelis if they have positive interactions with them in a hospital, providing a more balanced view if they had negative encounters with Israelis, Walden said.

“We don’t have the ambition of drastically changing the health conditions in the West Bank but for these 320 patients we treat,” and those in “neighboring villages, this is a message of hope,” he added.

In addition to the stop at the hospital, the doctors also spoke at Hillel at Washington University, Central Reform Congregation and the Islamic Foundation of Greater St. Louis.

Carolyn Amacher, a co-chair of the local chapter of the Jewish organization Ameinu and one of the organizers of the doctors’ visit, describes herself as a “progressive Zionist” and said she is trying to promote a “two-state solution where people of all backgrounds have full rights as citizens.”

“I worry about any of the vulnerable populations, including the Palestinians, getting full access for their basic needs to be met, including healthcare and social services,” said Amacher, who belongs to Central Reform Congregation and works for The Community Action Agency of St. Louis County, which aims to end poverty in the area.

As to what happened with the patient with the swastika tattoo, Schnadower said that if the patient had learned his background, “I don’t how they would have reacted but I treated them like I would treat anyone else.”