Have shofars, will travel: St. Louis rabbis ready to bring Rosh Hashanah mitzvah to the people 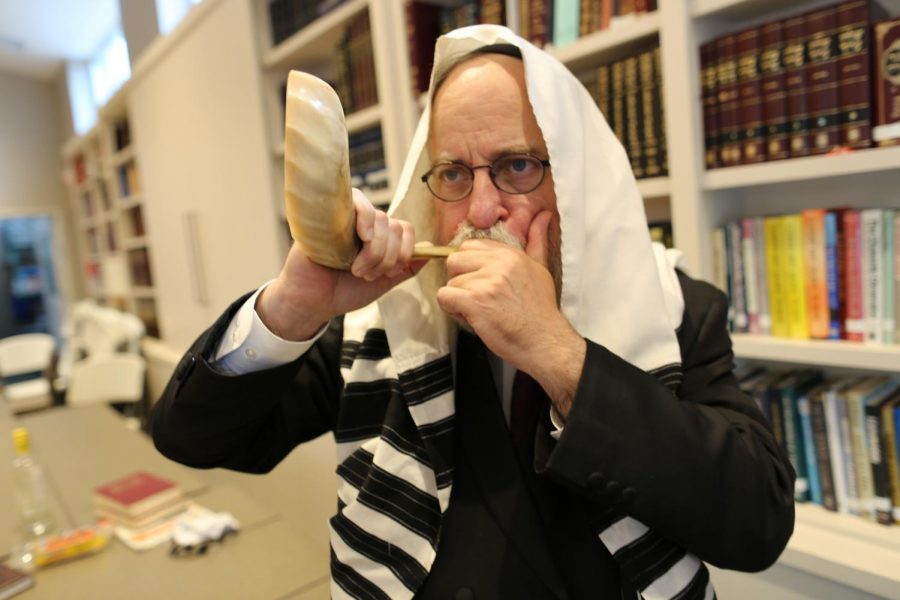 The Torah commands us to hear the sound of the shofar on Rosh Hashanah, and a mitzvah is a mitzvah, come rain, snow, sleet or even pandemic. That poses a dilemma for Jewish St. Louisans who are hesitant to leave their homes given the risk of COVID-19. One innovative solution is curbside shofar service.

The concept of home-delivered shofar blowing isn’t a new one. Rabbi Yosef David, executive director of Aish St. Louis, said he has often strolled through his U. City neighborhood with his shofar during Rosh Hashanah in past years.

With many people quarantining at home, the need for an on-demand shofar service is likely to be higher than ever. In University City, residents in neighborhoods near Bais Abraham Congregation and Young Israel of St. Louis can take advantage of this arrangement, said Rabbi Moshe Shulman, leader of Young Israel.

“The format this year is going to be new because we know that there are going to be more people this year who can’t make it to shul, either because of space or because of concern about COVID,” Shulman said. “What we want to try to do is organize a schedule whereby we can identify the blocks where the people live.

“One of the advantages in the Orthodox community is that we all live within walking distance to the synagogue. We can map out a route around the community and have specific times in each block where we can say, at such and such a time, we’ll be blowing outside. In years past, we went inside the homes to blow shofar and that we can’t do this year. So we’ll do it outside and literally have people open their doors and we’ll stand outside.”

The vision of the block-to-block shofar service was the simple part, Shulman said. As the High Holidays approach, Young Israel was still fine-tuning the logistics. The pandemic required the synagogue to consider different options to reach out to quarantining members.

“It’s both a challenge and an advantage unique to the Orthodox community that we have our families close by,” he said. “Even if they don’t come to shul, they want to hear the shofar because it’s a mitzvah. But they live within a close proximity to the synagogue, so it enables us to reach out to them in this fashion and provide this service.”

“We have someone in our community who’s acting as sort of a shofar matchmaker,” he said. “So anybody who’s interested in blowing shofar and anybody who wants to hear shofar is encouraged to let us know. If there are three people on one block who are making a request for shofar, we’ll try to stack it so we’re being efficient. We’re doing it a little more informally, sort of customized and on demand.

“It’s not exactly a new concept because there are always people who need to hear shofar who can’t make it to shul. It’s just that there are going to be a lot more of them this year than in a typical year.”

Bais Abe also will commemorate the holiday with shofar being blown outside the synagogue, Silberstein said.

“We are having in-person services, but the shofar blower will be outside,” he said. “We’ll be having shofar blowing in the late morning on the second day of Rosh Hashanah outside in front of the shul, and then we always get together for tashlich service in the afternoon at Lewis Park, and we’ll be blowing shofar there as well.”

Parks and outdoor settings are ideal for social distancing, so they will be used for a number of Rosh Hashanah observances. For example, United Hebrew Congregation will hold a socially distanced Shabbat singalong and outdoor service on its parking lot on erev Rosh Hashanah. Congregation B’nai Amoona will be holding a tashlich at the lake.

You can even hold a tashlich service at home with Congregation Shaare Emeth’s Do-It-Yourself Tashlich Service. It includes prayers, poems and creative ways to cast your sins or shortcomings upon the water. All you need is a small pond or inflatable swimming pool. Live fish are optional, but preferred because their eyes are always wide open and, symbolically like G-d’s, watching us.

Chabad centers in St. Louis will hold seven outdoor Rosh Hashanah services Sunday, Sept. 20. The “Rosh Hashanah in the Park” services are open to anyone. The inspiration for the services was a shofar campaign that began in 1953 by the Rebbe, Rabbi Menachem M. Schneerson. These abbreviated, 30-minute services will include the shofar sounding, and in some locations the tashlich service.