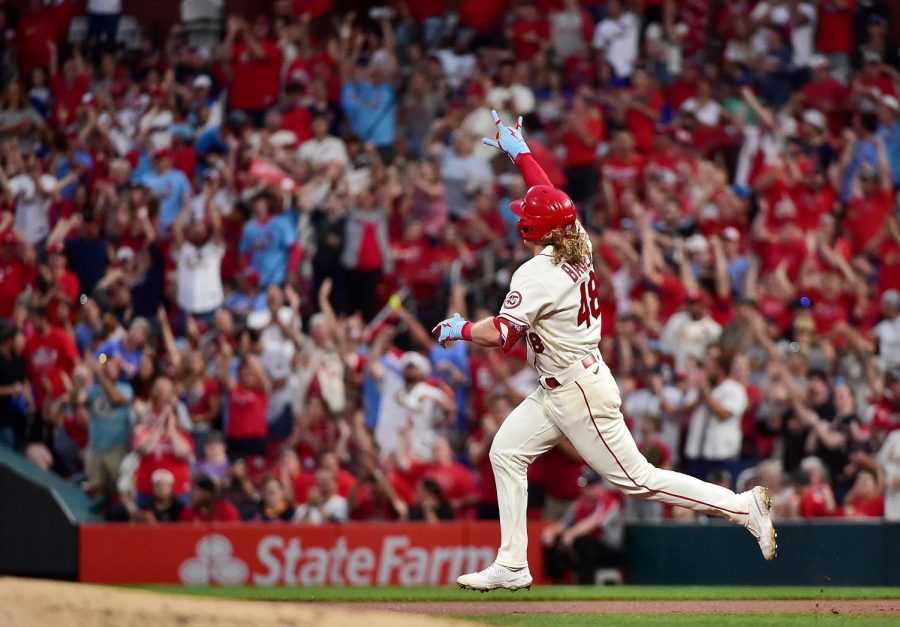 Harrison Bader just finished off his best overall season in the Major Leagues, but he’s not thinking about that right now. There are “other” things to accomplish this October.

On the dawn of perhaps the most important game of his life — Wednesday’s Wildcard matchup between the St. Louis Cardinals and Los Angeles Dodgers — Bader’s mind is elsewhere. He’s not thinking about being a sharp-dressed man or sporting the best hair in baseball this week. Bader is thinking about entering a different hallowed ground: Postseason hero.

In an exclusive article for The Players’ Tribune published Monday, Bader recapped the amazing September winning streak that the Cardinals went on, but also emphasized the big picture sitting in front of their faces — and that is the postseason that could make that 17-game streak an impressive footnote to bigger history or just a nice thing that happened before the end.

Whether Cardinal Nation believes it or not, Bader is more selfless than fans give him credit for. When he makes a sprawling catch in the outfield, it’s not for showboating. The man simply wants to succeed, and I’ve believed that since I interviewed him on the road as he drove up to his first spring training back in 2015. Flamboyance shouldn’t be taxed if it’s in the name of winning baseball games, and Bader personifies that with his play and his words.

“I don’t care about the stats,” Bader said in the article. I’m going to find a way to do at least one thing well for this team today to help us win.”

He’s showing off his inner mensch with those words, and his on-field play backs it up. Think of the Wrigley series a week ago, where the Cardinals swept all four games. Bader collected 10 hits in 15 at-bats, including three home runs, with one coming late in the afternoon game to tie it up. But also think of the runs saved in the outfield, specifically the incredible double-play sequence from that Saturday road game. As the triple rundown escalated, Bader came running in from the outfield to catch Yadier Molina’s throw and run back the final Cubs runner to complete the play and end the inning. Bader didn’t hesitate; he just acted on instinct, something that has carried him throughout his five-year MLB career.

What he also points out for The Players’ Tribune is the viewpoint that rival fan bases and teams have of St. Louis. In the opening paragraphs, he talks about those people, including opposing players who haven’t played for the Cardinals here in their career, not getting the effect a sea of red can have on a baseball team. “It’s not their fault” is how he describes it, and it’s true.

“If you’re a ballplayer, there’s simply nothing like pulling on that Cardinals jersey and going out and doing something special for this team.”

Bader called playing for the Cardinals “the ultimate honor,” noting how the fans add so much to the electricity of the in-game moments for players. Think about it. While Busch Stadium wasn’t genuinely packed all season, the Cardinals still ranked in the top ten in average home attendance, coming in 4th. They finished ahead of the New York Yankees and Mets, as well as the Boston Red Sox. For young players like Bader, it takes a player to a higher plane and gives them a competitive edge. So while the fans didn’t take the field and help win any of those 17 games, or the 20+ wins in September, they played a big part in the comeback with their interest and support.

It wasn’t just outgoing types like the 27-year-old Brooklyn, N.Y. native who were enlivened by the winning ways; Bader pointed out one particularly reserved veteran player who started smiling a lot more recently.

But nothing Bader said in The Players’ Tribune article rings truer than this: “This streak isn’t going to make any difference to our opponents.” It simply won’t. At a young age on a big stage, Bader sounds like a veteran player himself.

On the Turnin’ 2 Podcast last night, a great conversational listen for any Cards fans, I was asked about which player could come up big for the team this week and month. I can’t stop thinking about Bader being that player. The guy who takes away a run or two with a catch in the field, and then blasts a difference-making home run or triple. Someone who makes pitchers nervous with his speed, turning singles into doubles or wild pitches into runs scored.

Harrison Bader may have just polished off his best season in the big leagues, but even he knows the Cardinals have bigger fish to fry this fall.