Haman, Mordechai will once again take to the streets of University City 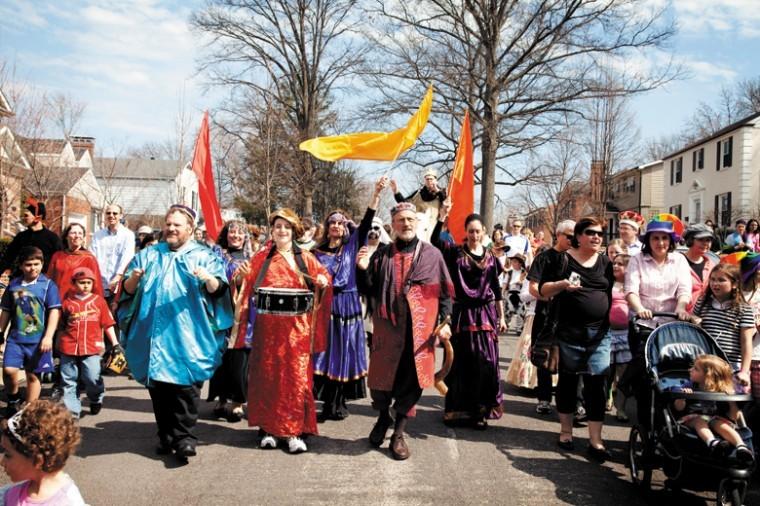 Beautiful weather made for a wonderful afternoon at the annual University City Purim Re-enactment Parade last year. Hundreds of costumed participants turned out for the parade.

Grab your royal robes or your tri-cornered hat—it’s almost time for the annual Purim Re-Enactment Parade, a lively, popular event that features a herald with a shofar, Mordechai (the good guy), Haman (the bad guy), flag bearers, a cymbalist and at least one drummer, all in costume—and a horse.

“The parade is a re-enactment of one of the great pieces of the Megillah,” said Phyllis Shapiro, co-founder with Rose Ann Ariel of the event, now in its tenth year. “At first we envisioned that people would line the streets, watching and waving at us, but instead people join the parade, with families and children all following the horse.”

The hour-long parade will begin at 2 p.m. March 8 at the corner of Gay and Cornell avenues, and wind through the back streets of University City to Saxony Court. The planners say that in past years, the parade has drawn 300 or more people, Jews and non-Jews as well.

Shapiro is a career law clerk and staff attorney with the Federal District Court in St. Louis and president of Bais Abraham Congregation. She lives in University City with her husband, Jack Shapiro, a mathematics professor at Washington University. They have three grown children. Ariel lives in University City with her husband, Mickey Ariel, an anatomy professor at St. Louis University School of Medicine. They have three children and are affiliated with Young Israel.

Ariel and Shapiro do not recall exactly what led to the original conversation 10 years ago, but they do remember liking the idea of a parade. “One day it occurred to us how simple it would be to re-enact the story of Haman leading Mordechai through the streets dressed in the king’s clothes, riding on a horse,” Shapiro said.

In no time, they arranged to borrow costumes from a local theater company. Then they turned to the Yellow Pages to look for a horse. They found one for rent at a local family-owned business, and over the years, Ariel and Shapiro also have rented baby llamas and a baby camel.

Ariel recalled that the two agreed that their husbands should play the roles of Mordechai and Haman—before asking them. “They were good sports, and that first year, they both were in the parade,” Ariel said. Since then, Ariel and Shapiro have chosen people from different congregations to play the parts. Shapiro noted, “That is so appropriate for Purim, a holiday of Jewish unity.”

The identity of the individuals playing Haman and Mordechai is kept secret, but Earl Newman always plays the role of the herald. “I am the first one out of the gate and I set the tone for the parade,” said Newman, 69, a developer. Affiliated with Young Israel, Newman lives in University City with his wife, Faye, who teaches English as a second language. They have three children and eight grandchildren.

“The parade has always been about education and celebration,” Newman said. “I do this to raise awareness of what it means to be Jewish and also to celebrate Purim, which is about reawakening to the idea that miracles happen every day.”

In the course of the parade, the person playing Haman calls out this line several times in Hebrew: “Thus shall a man be treated who the king wishes to honor.”

The character of Mordechai rides the horse in silence. “The year they asked me to play Mordechai, I hadn’t been on a horse in about 100 years,” Bobby Medow said, laughing. “When I first got on, I remember thinking, my goodness—I am up high! But those horse handlers know what they are doing.”

Medow, 66, is a vice president at Merrill Lynch. He lives in University City with his wife, Chelle, a semi-retired teacher. They have four children and 10 grandchildren, and are affiliated with Young Israel. “Whether you are 7 or 70,” Medow said, “this parade is a joyous time, a time to have fun.”

Rabbi Moshe Shulman of Young Israel would agree. “I dress up every year and participate in the Purim parade with many of my congregants. It’s a unique experience, and the parade always brings a smile to the faces of both participants and onlookers,” Shulman said.

After 10 years, the two-person parade committee considers the Purim parade a St. Louis institution. Ariel and Shapiro both said they are especially pleased that the parade is a grassroots effort, with no politics and no promotions, unlike sponsored events. They also are pleased that to date, they have had no rain-outs.

“Sometimes you just start something fun, and over time it turns into something people expect,” Ariel said. “At this point, we wouldn’t not plan this parade. It’s a tradition.”