Grappling with the aftermath of COVID-19 a year later 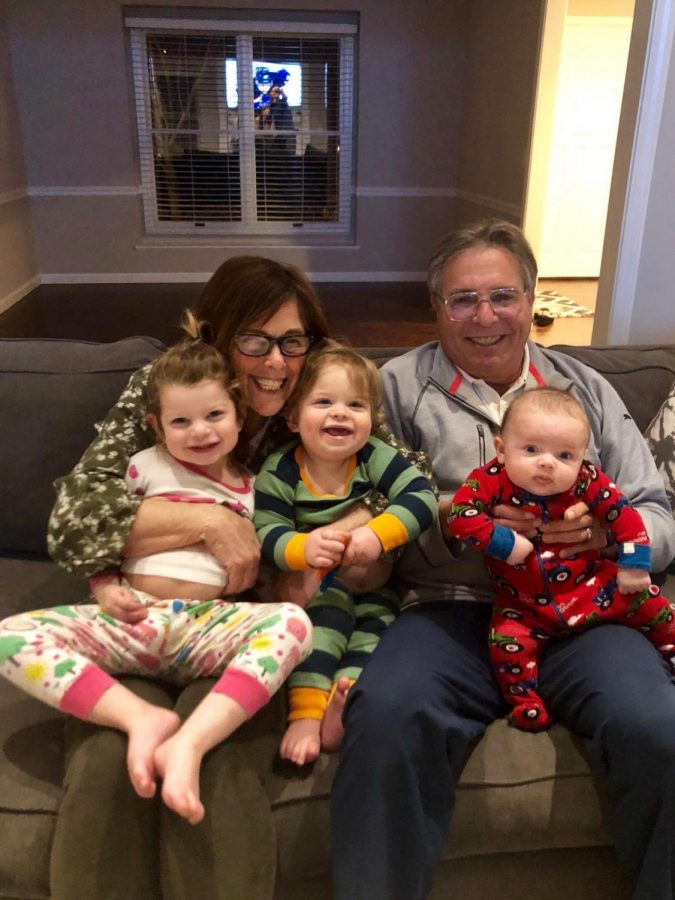 Before they got sick with COVID-19, Jane and Michael Weinhaus enjoyed time with their grandchildren, from left to right: Bryn and Leo Weinhaus and Jackson Harvey.

A year ago, an ambulance hurried Mike Weinhaus from his home in Chesterfield to Missouri Baptist Hospital because he could barely breathe. As he was being wheeled toward the intensive care unit, he remembers stopping in front of the room where his wife, Jane, a preschool teacher at Temple Israel, lay quiet, fighting for her life. She had been placed on a ventilator a few days earlier after testing positive for COVID-19.

“All I could think of was, how am I going to plan for the worst as sick as I am,” said Mike, 64, who also was experiencing severe symptoms having tested positive for the virus.

As if this wasn’t bad enough, two of the Weinhauses’ adult children, Jason, 38, and Ryan, 33, along with Ryan’s wife, Brittanie, 31, were each battling the virus quarantined at home.

When the Jewish Light first reported that five members of the same family had tested positive — and two were hospitalized with life-threatening conditions — the story was picked up by other news outlets not only locally but also nationally and internationally. Remember, this was mid-March 2020, long before hundreds of thousands of Americans had lost their lives to the coronavirus, including numerous instances of several members in one family.

Thankfully, Michael’s worst fear never came to fruition, although Jane spent nine of 20 days at MoBap hooked to a ventilator. Michael’s labored breathing was treated with oxygen therapy, rather than a ventilator, during his 10-day hospital stay. And Jason, Ryan and Brittanie, each of whom had milder cases, recovered within a few weeks.

Eventually Jane, 64, was able to return to her teaching job at TI’s Deutsch Early Childhood Center, where she has worked for more than 25 years and as “Miss Jane,” is beloved by all. She reports she is doing very well and did not want to be interviewed.

For Mike though, recovery has been more challenging as he still deals with the lingering effects of COVID-19.

“I’m a long-hauler,” he said, referring to still having some symptoms a year after he was first infected. “It’s mainly two things: I still do not have my sense of taste or smell. And the other is brain fog, loss of short-term memory. Lack of focus and concentration. Difficulty coming up with the right words in a conversation.

“Maybe part of it is age, but I wasn’t like this before. I always felt like I was a step ahead of others but now I feel a step behind.”

Let’s get something straight from the get-go: Mike Weinhaus wants no one to feel sorry for him. He’s much more interested in maintaining a positive outlook, explaining he’s gotten used to living without his sense of taste or smell, and he has found ways to combat the brain fog.

“I’ll relate it back to when I was in the hospital,” he said. “The nurse would come in after I had been there for a while and she’d say, ‘You have to get out of bed now.’ I’d say, ‘I can’t. I don’t have the strength.’ She’d say, ‘Well, they’re not going to let you leave here until you can.’  I wanted to go home so I had to dig deep to move. It took all my strength.

“That’s what it’s like with COVID brain. I knew I couldn’t let it affect my life or dwell on it. So with all my energy I’m able to push through to keep busy. That’s the key. I’m busy all waking hours doing things where I’m working my mind. It’s enabled me to have more focus and energy.”

Weinhaus continues to see a neurologist, though at this point, he says, doctors are still learning about the residual effects of the virus on long-haulers like him.

“I haven’t received any answers because I don’t believe there are any answers yet,” he said. “We all are grateful for different things.  And for me, to focus on those things that make me grateful does limit the (negative) effects of losing both taste and smell and the ability to concentrate.”

Think about it, though, he hasn’t been able to taste or smell anything for a year. At one point he started eating uncooked ramen noodles because of their texture.

To help keep his mind engaged he turns to golf, be it playing, organizing and officiating tournaments or working on an educational app called GolfQuis, which helps players learn or improve their understanding of the game’s rules in a quiz  format. GolfQuis features more than 2,100 questions, most of which were written by Weinhaus, who is constantly updating and adding more questions to the app.

He started playing golf when he was 10, and the game soon became a passion. “I knew from an early age that I wanted to be involved with golf somehow, some way, at some time,” he said, adding that he sold the family’s auto salvage company when an opportunity arose for him to get into the golf business. “That’s part of having a dream and then being able to see it come true.”

Weinhaus would much rather discuss the positives in his life than rehash “the scariest health crisis” that he and his wife of 42 years ever faced. The couple met when they were 16 at a New Year’s Eve party. He went to Ladue and she was at Parkway Central.

They decided to go to different colleges, so she headed to Kansas University in Lawrence while he attended University of Missouri-Columbia. After two years as rivals, she transferred to Mizzou.

“Really, when I think about it, we’ve been together for 47 years,” said Weinhaus. “In that time, so many wonderful things have happened. We’ve been truly blessed.”

That certainly seems to be the case. So many people care about the Weinhauses that when they were in the hospital, friends started a GoFundMe account to help them with medical bills.

“COVID is extremely expensive, and we are very fortunate for the health insurance we have,” said Weinhaus, adding, “The GoFundMe account definitely relieved some of the pressure and we are so thankful.”

As soon as they were able, the couple, who belong to Congregation Shaare Emeth, were tested to see if they could donate blood so their antibodies could be used to help treat others with the virus. Weinhaus says he and his sons and daughter-in-law donated, but Jane’s iron level was too low.

“Being available to help others who are recovering is just one of the silver linings” to what, Weinhaus admits, was a challenging year. He counts other silver linings as well, such as “the gift of life and how precious it is and how quickly it can be taken away from you.”

He and Jane also welcomed two new grandchildren to the family recently, born a month apart, bringing the total number to five.

“Life was great before, but it’s even better now,” Weinhaus said. “Even though I am still experiencing some of the effects (of COVID), I’ve never been happier.”

That kind of philosophy may be why Weinhaus wastes no time wondering if his sense of taste and smell will return, or if the brain fog will go away.

Still, should his tastebuds return, he expects the first place he’ll head is to the Pasta House Co. for the house salad. And yes, it would be lovely, he adds, to be able to breathe in the sweet fragrance of fresh, spring air.

Right now though, his loss of smell is proving beneficial to the rest of his family.

“With five grandchildren under the age of 5, I am now the designated diaper changer,” he said, laughing.