From turtles to green spaces, the Glassbergs and Greensfelders left their love around St. Louis 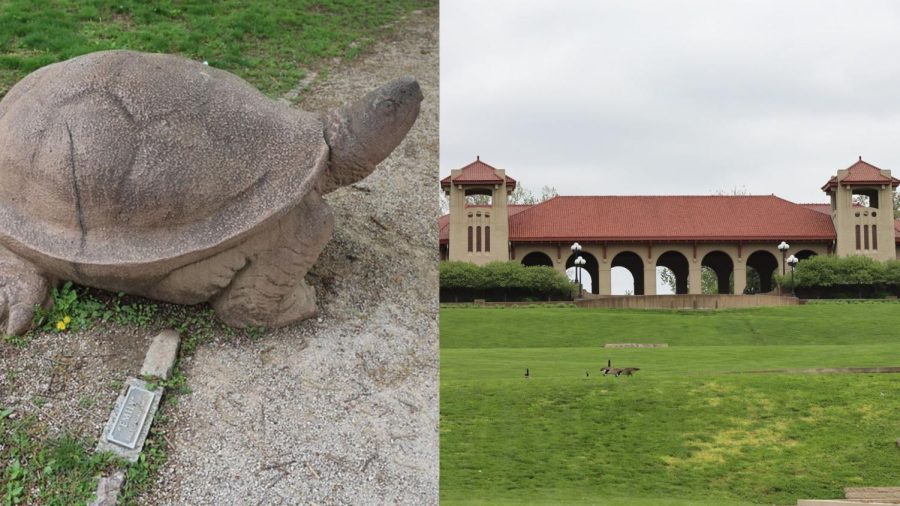 A half dozen large concrete turtles — and one snake — sit along Oakland Avenue south of the St. Louis Zoo. Turtle Park, which opened in 1996, was designed and sculpted by Bob Cassilly, the founder of downtown’s City Museum. Each turtle is identified by a small plaque. The names include Adam, Antonio and David after the grandchildren of Sonya “Sunny” Glassberg. Glassberg helped fund the park. She and her husband, Myron, were philanthropists who preferred to work behind the scenes but contributed to parks and conservation efforts in the St. Louis area. Support for the environment ran in the Glassberg family. Myron Glassberg’s uncle Albert Greensfelder was also a frequent donor who favored the outdoors.

The Greensfelders and Glassbergs were responsible for a number of significant efforts, some of which were implemented without accolades, said Dick Glassberg, Sunny and Myron’s son.

“My dad did everything anonymously,” said Glassberg, 80. “One of those things I learned about after he passed away. He anonymously funded a lawsuit that stopped gravel mining along the Meramec River. It probably saved the river. I found out about it years l a t e r from a friend of his.”

The Glassberg name appears in a few public spaces in addition to the turtle park. The Sonya and Myron Glassberg Family Conservation Area is just south of Eureka. And the Myron Glassberg Pavilion fittingly sits in Greensfelder Park in west St. Louis County.

A number of Washington University chairs and professorships are also named for the two families.

Although both made an impact with their contributions, neither felt it necessary to seek credit. That may explain why so many institutions were supported by the Greensfelders and Glassbergs, but without their names attached.

One of the crown jewels among St. Louis County recreational areas is Greensfelder Park, a 1,734-acre area with playgrounds, campsites and trails. The land for the park was donated to St. Louis County in 1963 by the trustees of the St. Louis Regional Planning and Construction Foundation. The foundation was established in 1939 by Albert Greensfelder.

Although the Greensfelders had no children, they became de facto grandparents to nieces and nephews, including Jane Young, who, like her cousin Dick Glassberg, refers to Albert Greensfelder as Uncle Albert. She remembers going to Albert and Blanche Greensfelder’s home for holiday dinners. She also recalls Uncle Albert being a stern man.

“I have one memory that will illustrate how dramatic they were,” Young said. “If my uncle didn’t want you to talk anymore, he would put his hand up like ‘That’s enough!’ ”

Young also remembers another unusual property where she visited Uncle Albert. “They owned a place called Rockwood in south St. Louis,” she said. “I used to go there frequently. It was a fabulous roundhouse on top of a knoll, in the Buckminster Fuller style. It was an architectural gem, and someone in their meanness set fire to the house.”

Greensfelder served as vice chairman of the Missouri Conservation Commission. He was a member of the Missouri, St. Louis County and University City planning boards, and was a member of the National Capital Park and Planning Commission. He also served on the board of trustees for Creve Coeur Memorial Park, which he helped St. Louis County establish as the first county park.

Albert Greensfelder died Sept. 17, 1955, at the age of 76.
Myron and Sunny Glassberg and the World’s Fair Pavilion
Myron Glassberg was the son of Blanche Greensfelder’s sister, who died when he was 8 years old. Albert and Blanche became his guardians, and Uncle Albert became Myron’s role model. That extended to his interest in parks and nature. Myron Glassberg was an engineer who founded the General Installation Co., serving as its chairman and CEO from 1972 to 1980.

Sunny Glassberg came to St. Louis at the age of 21 and married Myron. The Glassbergs were members of Temple Israel. Sunny was committed to philanthropy, a trait she inherited from her physician father. Like Myron and Uncle Albert, Sunny favored projects that involved the outdoors, but she also volunteered and raised funds for the Missouri Historical Society, YMCA and the League of Women Voters. She helped begin the Switching Post retail store that benefits the Miriam School.

Perhaps one of Sunny Glassberg’s most lasting and significant contributions is the restoration of the World’s Fair Pavilion in Forest Park, said Jim Mann, former executive director of Forest Park Forever.

“She used to talk about saving the pavilion,” Mann said. “She said, ‘We have to save this gem, this old lady who is down on her luck in the park.’ ”

The pavilion was built in 1909, after the 1904 Louisiana Purchase Exposition, the formal name of the World’s Fair. But the original building costs were covered by proceeds from the fair.

Time and the elements had taken a toll on the structure and, by the late 1990s, much of the brickwork had disintegrated. In 1998, Forest Park Forever took on the pavilion as one of its first major capital improvement projects. It was a public-private funded initiative that raised $1.1 million, thanks in large part to Sunny Glassberg. She didn’t just help raise money. Sunny took an active interest in checking out the restoration progress, Mann said.

“On occasion, she used to bring doughnuts to the construction workers,” he said. “There were times where, in a very soft voice, she would ask a question of the workers like ‘Are you sure you got that spot painted correctly?’ They treated her like their mom. They were happy to see her, and she was very proud of it when it was done, which made me feel really good.

“One day she asked me to meet her at the pavilion. A school bus showed up, and a group of kids got off the bus. They were going to have lunch. Their teachers said they read about it and wanted to see it. That was really part of Sunny’s vision, this kind of informal place where you’re out riding your bike and you can sit on the steps and see this beautiful view. A little boy came up to her and said to her, ‘Who are you?’

“I said, ‘Well, young man, this is Mrs. Glassberg, and she really made this possible.’ And he looked at her and he said, ‘Oh, OK, cool.’ Sunny asked, ‘Did you set this up?’ and I said, ‘Sunny, I couldn’t have dreamed this.’ She was so tickled that these kids were just showing up and eating their lunch, having a great time.”

Myron Glassberg died in 1991 and Sunny continued her philanthropic efforts until her death in 2013.