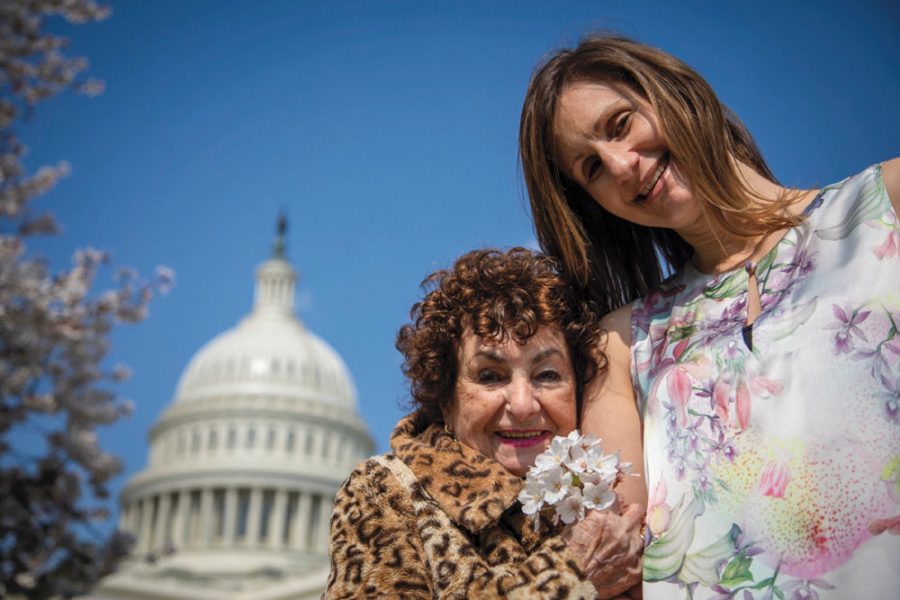 Sonia Warshawski (left) and her granddaughter (and filmmaker) Leah Warshawski stand outsidae the Capitol in Washington, D.C., in April 2018 for Holocaust Remembrance Day. Members of Congress watched Leah’s documentary ‘Big Sonia’ at the Capitol on April 12.

Sonia’s granddaughter, filmmaker Leah Warshawski, thought the story of Sonia and her shop would make a great subject for a short film. What Warshawski didn’t expect however was how big of an impact Sonia, now 92 years old, had on others through her story as a Holocaust survivor. Warshawski realized the story she wanted to tell was much bigger than just a shop, and the short film evolved into the feature-length, award-winning documentary “Big Sonia.”

Warshawski, who graduated from Clayton High School in 1996, started working in the film industry in college in Hawaii and has worked on various TV, commercial and documentary projects. For her project in 2011, she traveled to Kansas City with co-director and then-boyfriend, now-husband Todd Soliday to make a fun 20 to 30 minute film about Sonia and her late husband’s tailor shop, which Sonia kept open after his death.

“We thought her shop would be a great reality show,” Warshawski said. “Every day that you’re in that shop, something else happens. You meet people from different walks of life, backgrounds, races, cultures and ethnicities.”

Warshawski said she knew there was a reason patrons visited Sonia’s shop, even when there was nothing else in the mall.

While working on the short film, Warshawski and Soliday followed Sonia and her daughter Regina to a school assembly about their family history.

Sonia grew up in Miedzyrzec, Poland, and was taken by Nazi forces in September 1939, when she was 13. She spent her teenage years in three concentration camps: Majdanek, Auschwitz and Bergen-Belsen. During that time, she had to see her mom marched to her death. Sonia was liberated from Bergen-Belsen in 1945.

Warshawski said Sonia has always openly shared her Holocaust memories to her family, but she did not begin sharing her story publicly until 10 years ago.

After the assembly, students tearfully approached Sonia and told her how much her story affected them. It was then that Warshawski realized Sonia’s effect on people reached beyond just her customers.

Warshawski said Sonia affects so many people because of her resilience.

“When you look at her, she’s a tiny bright-colored woman with big hair and a big car and a big personality,” Warshawski said. “You learn about all the tragedy … and the two don’t really match … The fact that she gets up six days a week and drives herself to work despite everything that she went through is unique and people aspire to do that themselves.”

Warshawski said a major theme of the film, with its juxtaposition of Sonia’s history and personality, is empathy.

“The whole theme of the film has become this message of love over hate,” Warshawski said. “We hope it inspires people to think about their own lives and own families differently and to maybe give your parents a break because you don’t know what your parents have dealt with and just to have more compassion for people.”

However, in order to make the film a success, Warshawski knew she needed the rest of her family to participate. She said many people don’t think of how the Holocaust affected the children of survivors. This intersection of empathy and intergenerational trauma is important to the film, according to Warshawski.

“It’s given some validation to Sonia’s children as second-generation survivors,” she said. “A lot of people don’t ask them or didn’t ask them before about what it’s like to grow up in a family with parents who are survivors.”

But Warshawski said it was not easy convincing her family to take part in the film.

“No one in my family wanted to be in the movie and they’d tell you the same thing,” she said. “They didn’t understand why we needed to talk to them. They thought the film was only about Sonia.”

Warshawski described working with her family as “one of the hardest things” she’s had to do professionally because her family had to be very vulnerable on camera.

“Working on a film about your family adds a lot of layers of obligation and anxiety but it also has a layer of access that we would never have otherwise, so it’s a blessing and a curse,” she said. “As a filmmaker, people warn you all the time not to make a film about your family … It just makes it really tough because you want them to be proud of what you’re doing.”

Warshawski said her husband and the rest of the film’s crew helped her make difficult decisions about emotional scenes involving her family.

Ultimately though, Warshawski said she is proud of her family for being so open because it has helped others like them.

“A lot of second and third generation come up to us afterward and say, ‘Thank you so much for talking about the stuff that we didn’t know we could talk about, the things that we couldn’t say.’” she said. “We’re proud of that element, that we’re opening up these conversations and families.”

Warshawski said “one of the biggest blessings” of the film has been traveling to film festivals with her family.

Today, Sonia still lives in Kansas City and runs John’s Tailor Shop, now located in a “dead office building” rather than a “dead mall,” according to Warshawski. The documentary describes Sonia as “thriving.”