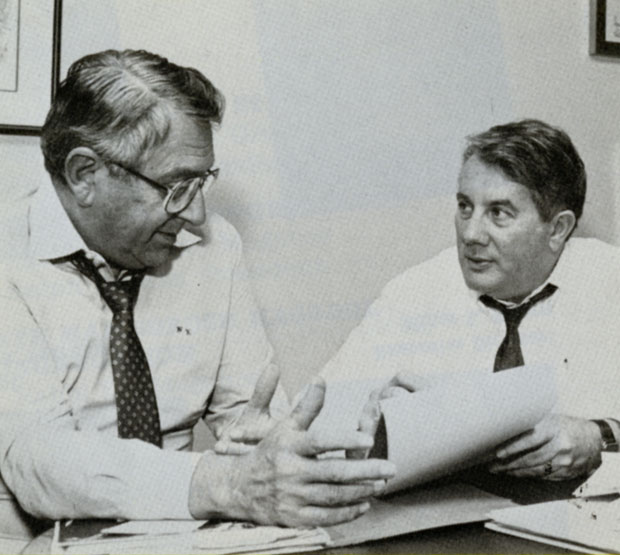 William “Bill” Kahn, who headed at separate times St. Louis’ two largest Jewish organizations, the Jewish Community Center and the Jewish Federation of St. Louis, died Thursday, June 27 at age 87. He had been in declining health for the past several months and died of pneumonia and kidney failure at St. Luke’s Hospital, according to family members. He most recently resided in Ballwin.

Mr. Kahn was born on July 3, 1925, the son of Joseph “Ziggy” and Ann Pearlman Kahn and grew up in Pittsburgh. He attended the University of Pittsburgh, where he earned a bachelor of arts degree and a master’s degree in social work. After initially considering a career as an athlete, Mr. Kahn decided on Jewish communal service and social work, taking a job in St. Louis in 1949 with the old Council House, where he met his late first wife, the former Shirlee Fink of St. Louis.

The Kahns moved to Denver in 1955, where Mr. Kahn served as assistant executive director and camp director of that city’s Jewish Community Center. He returned to St. Louis to become executive director of the JCC, an organization that replaced the former Young Mens/Young Women’s Hebrew Association, which had been located at Union and Enright avenues in the city of St. Louis.

During his tenure at the JCC, from 1958 to 1977, Mr. Kahn oversaw major developments, including the construction of the I.E. Millstone Jewish Community Campus and the building of the Carlyn H. Wohl Building in 1963 as well as the building of new senior housing, the Parkview Towers in University City and Covenant House on the Millstone Campus in 1972. Other major JCC developments were Camp Sabra on the Lake of the Ozarks in 1971 and the Susan Jacobs Day Care Center in 1977.

Mr. Kahn’s solid record of accomplishments at the JCC attracted national and international attention.  He was frequently invited to visit other North American cities to help communities build or improve their JCCs, and spent time in the State of Israel helping the Jewish State establish its own network of JCCs.

In the fall of 1978, Mr. Kahn moved to his native Pittsburgh, where he became director of that city’s Jewish Federation. His success in that post led to an offer by the New York Federation of Jewish Philanthropies to become its executive vice president, in 1981. In New York, he took on the task of bringing about the merger of the Federation with the United Jewish Appeal of New York. In spite of extremely vocal resistance and opposition and the need to get approval from 130 boards and agencies, Mr. Kahn accomplished the merger.

In 1986 Mr. Kahn returned to serve as executive vice president of the Jewish Federation of St. Louis, which he accepted. He served as the organization’s leader until his retirement in 1990.

During his years at Federation, Mr. Kahn played a key role in fulfilling his longtime promise to the Holocaust survivors in St. Louis that an appropriate St. Louis Holocaust museum would be constructed. Mr. Kahn worked closely with former Jewish Federation president Tom Green and death camp survivor Leo Wolf to build community support for the museum. A Holocaust museum was part of the original plans for the Jewish Federation Kopolow Building, but was not completed until a painstaking and comprehensive fundraising and implementation plan was put in place. Mr. Kahn, along with Green and Wolf, recruited other supporters of the museum project,  including the late developer Donn Lipton and the late industrialist Sam Goldstein, who made major gifts in support of  the project, which is named in honor of Mr. Goldstein’s late wife, Gloria M.  Goldstein.

“Without question, without Bill Kahn’s forceful and consistent professional leadership and guidance, fundraising skills and incredible will power, the St. Louis Holocaust Museum  would not have become a reality,” said Tom Green at the time of the museum’s  official opening in 1994.

The Holocaust Museum and Learning Center would name a path in its garden in Mr. Kahn’s honor in 2006.

Although Mr. Kahn became an accomplished Jewish Community leader, he told the Light in 2008 he was personally most proud of his activism on behalf of human and civil rights throughout his career. Mr. Kahn’s late father was the athletic director of the Pittsburgh Jewish Settlement House and in 1933 organized the Anti-German Olympic League as a protest to Adolf Hitler’s anti-Semitism, in anticipation of Nazi Berlin’s 1936 hosting of the Olympic Games. “My Dad took a lot of heat for taking such a stand so early, but it certainly was an inspiration to me,” Mr. Kahn told the Light.

Mr. Kahn became an ardent supporter of the civil rights movement in the 1960s. Mr. Kahn marched with Dr. Martin Luther King, Jr. from Selma to Montgomery, Ala. and would also host Dr. King as a speaker at the JCC’s Liberal Forum. He also led summer programs in support of King’s educational efforts in the South.

During a September, 1978 farewell party for Mr. Kahn, who was leaving the JCC for his new position in Pittsburgh, Rabbi Jerome Grollman of United Hebrew Congregation spoke the crowd of close to 1,000 people, recalling how he and Mr. Kahn participated in civil rights demonstrations in the South, “long before it became fashionable to do so.”

While heading the Jewish Federation of St. Louis, he initiated an annual observance on Rev. Dr. Martin Luther King’s birthday on the Millstone Campus, which continues to today.  In 2008, Mr. Kahn received the Heschel-King Award from Jews United for Justice for his work on behalf of civil and human rights.

“St. Louis was so fortunate to have Bill Kahn as a member of this community, and he will be greatly missed.  He was larger than life, a big personality with big dreams and the energy and passion to bring those dreams to fruition,” Rehfeld said.

“From his passion for the civil rights movement and his leadership of the development of the Holocaust Museum and Learning Center to his work at the JCC and guidance in development of the I. E. Millstone Campus, Bill Kahn was a most influential figure in the Jewish community both here in St. Louis and nationally.”

Lynn Wittels, President and CEO of the Jewish Community Center, said Mr. Kahn’s impact is still felt today. “Bill was an incredible figure in the organized Jewish community, laying the groundwork for future leaders, lay and professional, both at the JCC and the Federation,” Wittels said. “His legacy is felt in the way we work together, support each other and foster our future generations.”

Mr. Kahn’s son, Michael Kahn of Olivette, said that he remembers how no matter how busy his father was, he would always carve out time for his family. “Growing up, I would wait outside with two baseball gloves. When my father came home and would see me, he would take off his jacket and roll up his sleeves and we’d play catch for 20 minutes,” Michael Kahn recalled. “We knew he was a big shot outside the house, but we just knew him as a terrific father who always had time for us.”

A funeral service for Mr. Kahn was held Sunday at Central Reform Congregation, where Rabbi Susan Talve officiated.  Nearly every seat in the sanctuary was filled and attending was a virtual “Who’s Who” of current and past leadership of the Jewish community of St. Louis. Following the funeral service, a private burial service was held at Chesed Shel Emeth Cemetery on White Road.

Mr. Kahn was preceded in death by his first wife, Shirlee Kahn, and his second wife, the late Margot Roberts Kahn. He was father of children Michael A. (Margi) Kahn of Olivette, Jane (Michael Bien) Kahn of San Francisco, Debra (Matt Beal) Kahn of Atlanta and Julie (the late Michael Kalnitz) Kahn-Kalnitz of Glenview, Ill., as well as grandfather of 13 and great-grandfather of four.