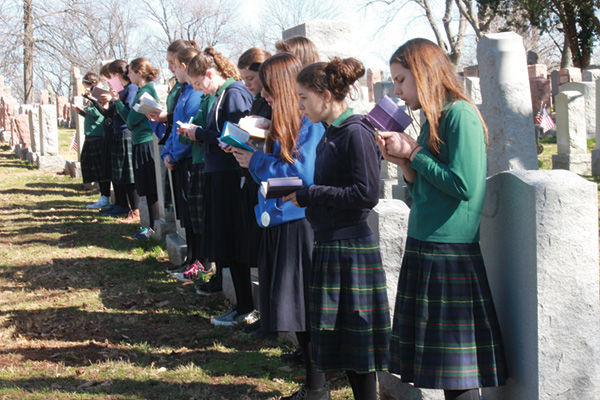 Ayel Morgenstern, a kindergarten student in Boca Raton, Fla., and her family were reading reports of the vandalism at Chesed Shel Emeth Cemetery when one of them saw a familiar name atop a damaged headstone: Rebecca Pearl.

It was Ayel’s great-great grandmother.

“(Ayel) said, ‘Mommy, how can I help?’” Lauren Morgenstern, a St. Louis-native, recalls.

Initially, they talked about organizing a bake sale to help pay for the repair of the 154 headstones that had been knocked over or damaged. Then Ayel said, “I want to hand paint rocks.”

The 6 year old had heard about the Jewish tradition of placing small rocks or pebbles atop a headstone to honor the deceased, among other reasons.

She spent days painting the 154 rocks and after connecting with the director of Chesed Shel Emeth, the family sent the  rocks to the cemetery.

On Tuesday morning, students from H.F. Epstein Hebrew Academy, Saul Mirowitz Jewish Community School and Torah Prep School of St. Louis visited the cemetery to place the stones at the gravesites that had been vandalized.

The project encouraged Ayel and the St. Louis students to connect with older generations of Jews buried at the cemetery and served as an antidote to the recent rash of incidents that have hurt the Jewish community, the educators and the Florida mom said.

“Sometimes you get wrapped up with all the hatred and anti-Semitism, and in a child’s eyes it’s plain and simple: everyone should be kind,” said Lauren Morgenstern, 35.

Her daughter decided that she wanted to paint two varieties of rocks: ladybugs and hearts.

“The ladybugs are for good luck and the hearts are for just a little bit more love,” Ayel said in a video with the rocks, which she painted in a number of different colors. She also painted more than 150 rocks for cemeteries in Philadelphia and Rochester, N.Y., where there was also vandalism.

The Morgensterns celebrate Shabbat each week and belong to a Reform congregation near their Florida home. Lauren said they place a strong emphasis on Jewish values, and she sees her daughter’s artwork as an extension of that.

After receiving the rocks, Chesed Shel Emeth executive director Anita Feigenbaum reached out to the Jewish day schools to see if they would like to collaborate in placing the stones.

More than 40 students migrated from Olive Boulevard to the older section of the cemetery where the vandalism occurred last month. As of Tuesday, police had not yet arrested any suspects.

“What some people believe is that acts of destruction are actually opportunities for creation,” Rabbi Scott Slarskey of Mirowitz told students after sharing a story. “The Kabbalists (say) that we have a responsibility for helping God recreate the universe, for helping God put things back together.”

And by placing the stones at the gravesites, the students were performing an act of chesed (kindness), said Rabbi Yaakov Green, head of school at Epstein academy.