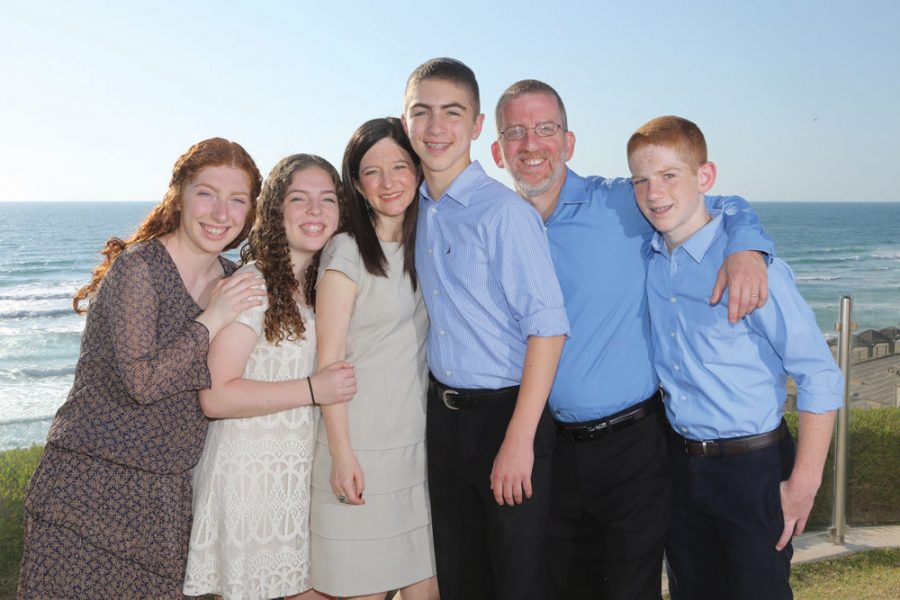 Dr. Morris Hartstein and his family moved to Israel in 2004, coming from St. Louis. The Hartsteins’ oldest daughter now serves in the Israeli army.

While Jews in his former home, St. Louis, were still celebrating Shavuot, Dr. Morris Hartstein was driving from his office in Herzliya, Israel to perform emergency surgery on a child who had an abscess in his eye socket caused by severe sinusitis.

Even though doctors who are shomer Shabbos will perform emergency medical care on Jewish holidays in both countries, Hartstein, a reconstructive and cosmetic eye surgeon, said he appreciates that in Israel, holidays like Shavuot are only celebrated for one day, whereas Jews in the diaspora observe it for two days.

“It’s hard to explain to people around Rosh Hashanah why you need three days off every week,” said Hartstein of his time at St. Louis University. “It feels a lot more humane keeping it to one day — and you don’t eat as much, which is good too.”

Hartstein, a former member of Young Israel of St. Louis, has, of course, encountered a number of other differences since he made aliyah in 2004 to Ra’anana, a central Israeli city.

What advice would you give to people considering moving from St. Louis to Israel?

I think the obvious one is to try and figure out how you’re going to make a living before you get here, but also be willing to then be a little creative and go with the flow; that will open up more opportunities.

I would also say that things aren’t going to be exactly like they are in America. In the beginning, there are a lot of bureaucratic things, and you have to have a little bit of a sense of humor and patience.

What are some parts about life in Israel that you enjoy that don’t exist here?

There is a great energy of life here. There is a book by Sebastian Junger called “Tribe,” and even with all the issues here, you definitely feel like you’re a part of something. And as much as it’s a very advanced western society in Israel, in a lot of ways, things are still a lot simpler than they are in the U.S. And it’s great for kids. It’s very outdoorsy here because of the weather and you have tremendous independence as a kid; they go all over the place by themselves.

How is practicing medicine in Israel different?

Here, there is real socialized medicine, not like in the U.S., which is a good thing, that everyone has healthcare no matter what. As a consumer it works pretty well, but as a doctor, when you work in a public hospital you really don’t have much of a salary. I work in a public hospital because I like giving back, and I like the academic part of it because I’m affiliated with a medical school. But you have to then go make a living separately in private practice.

Why would someone go to a private practice if they have public healthcare?

You go because to see a specialist at a public hospital, the lines can be long, and also theoretically, when you go to a public hospital to have surgery, you don’t know who the surgeon is going to be.

A lot of people have private supplemental insurance.  We have our whole family, [Hartstein, his wife, and his four children] insured for 200 shekels a month, which is about $50.

What do you miss most about St. Louis?

I miss the Cardinals, and I miss the Rams — when they used to be there. And I miss Sundays terribly, because here Sunday is a work day. And we like the energy here, but sometimes it’s nice to go where things are a little more mellow.