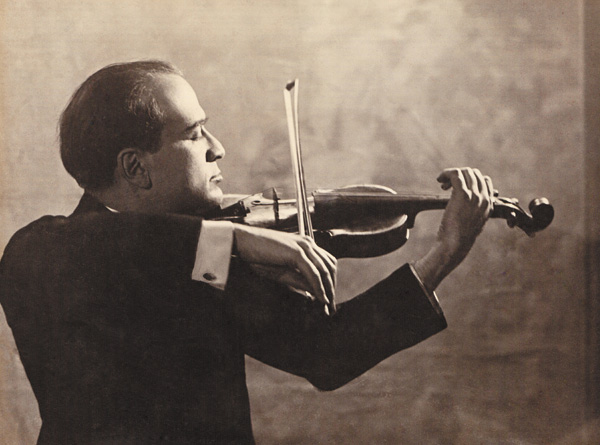 St. Louis native Josh Aronson directed the documentary ‘Orchestra of Exiles,’ about the founding of what became the Israel Philharmonic by Polish violinist Bronislaw Huberman. The film is part of the Jewish sidebar of the St. Louis International Film Festival.

By Barry Gilbert, Special to the Jewish Light

Since before movies began to talk, they could sing — or at least unspool to live music. And music has a loud presence at this year’s St. Louis International Film Festival.

The 21st annual festival, which begins Thursday and runs through Nov. 18 at six venues on both sides of the Mississippi, has films about music and music makers, as well as movies accompanied by musicians.

The offerings span a number of programming streams – or sidebars, as the organizers call them — including a Jewish sidebar of nine films.

Music is an element of “The Sapphires” (7 p.m. Nov. 17, Hi-Pointe), an Australian movie starring Chris O’Dowd (“Bridesmaids”) as the manager of an aboriginal girl group reminiscent of the Supremes.

“So it’s a very, very large and diverse group of films,” Froehlich says. “That’s always been the hallmark of the festival, the idea that we don’t want to focus too much on any one area because we want to make certain that there’s something for everyone. If you’re interested in movies, or even if you’re not interested in movies, the topics that we address in these films are often such that you don’t need to be a film fan to enjoy yourself.”

Also increased are the number of venues, with an added screen at Plaza Frontenac, a return to the Hi-Pointe and the addition of Edwardsville’s Wildey Theatre in; free programming, including a Family Film Showcase at Washington University; a series of educational films, programs and seminars; and an expanded Human Rights Sidebar that begins on the second weekend.

“We have 11 documentaries that pertain to human rights issues in both the U.S. and worldwide, and all but one have the filmmakers or the subjects of the films attached,” Froehlich says. “And those are all free.”

Special guests will help bring the movies alive, including St. Louis native Beau Willimon, the co-screenwriter of “The Ides of March” (1 p.m. Nov. 18, Tivoli), starring George Clooney, which was out in 2011. Willimon is “going to serve as a jury head for our filmmakers forum, which is a juried competition we do for first-time filmmakers,” Froehlich says. “We’re also presenting him with our annual Charles Guggenheim Cinema St. Louis Award, and he’ll be there to talk about the ‘Ides of March’ and his career in Hollywood.”

Sidebars are essentially a grouping of movies, a way for a person to match interests to films, and one movie could be in multiple sidebars. “It’s a way to let people know that if you like this, you also might like this,” Froehlich says. “And a lot of times, it’s overlapping,” with some appearing in multiple sidebars. “We traditionally have had a Jewish sidebar and we have, I think, a pretty substantial one this year.”

Froehlich says that beyond quality, no rules exist for picking the Jewish-themed movies, and this year four of the films were submitted to the festival.

“Inevitably, and appropriately, one or more of the films will deal with the Holocaust, but we try to ensure other aspects of the Jewish experience are also reflected in our sidebar,” he says. “The tragedies of the past and troubles of the present are always represented, but we attempt to balance the more sober films with others that include humor and romance.”

Three of the films in the Jewish sidebar, all documentaries, are built around musical themes. Oscar-nominated (“Sound and Fury”) director Josh Aronson, a St. Louis native, will be on hand for his “Orchestra of Exiles” (4 p.m. Nov. 11, Tivoli). It deals with the founding of what became the Israel Philharmonic by Polish violinist Bronislaw Huberman, who saved Jewish musicians from the Nazis and brought them to Palestine.

“The Invisible Men” (8:30 p.m. Nov. 16, Washington U.), from Israel. “It’s about Palestinian gays who are ostracized by the Palestinian community,” Froehlich says. “So they take refuge in Israel, where they are also not wanted, not because they’re gay, but because they’re Palestinian. They’re essentially homeless, welcomed nowhere.”

“Lone Samaritan” (6:45 p.m. Nov. 13, Plaza Frontenac), from Israel, is about a tiny religious sect that ostracizes not only a person who leaves the fold, but their family as well. The film is about one of those who left, Israeli actress Sophie Tzedaka.

“Oma & Bella” (5:30 p.m. Nov. 12, Plaza Frontenac) features two elderly women, Holocaust survivors who live in Berlin “who retain quite a bit of vibrancy in life,” Froehlich says. “The film is made by one of their granddaughters.”

“The Rabbi’s Cat” (6:15 p.m. Nov. 17 and 1:30 p.m. Nov. 18, Plaza Frontenac). This animated feature, based on a graphic novel by Joann Sfar (“Gainsbourg”), who co-directed, features a talking cat in 1930s Algeria. It has humorous elements but deals with serious religious issues.