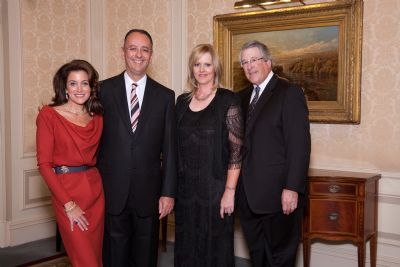 More than 700 people filled the Grand Ballroom of the Ritz Carlton in Clayton Monday for the Jewish Federation’s tribute to three groundbreaking supporting foundations and the families who established and sustain them: Tom and Karole Green for the Lubin-Green Foundation, Michael and Carol Staenberg for the Staenberg Family Foundation and Ken and Nancy Kranzberg for the Kranzberg Family Foundation. The audience was also treated to a performance by acclaimed singer and pianist, Michael Feinstein, who played a large selection of classic favorites on his Steinway baby grand.

“This is like a ‘Who’s Who of the Jewish Community,'” said attorney Gary Feder as he observed the huge crowd of attendees at the Ritz. Others made similar comments and were in agreement that the three couples honored as “Visionaries” at the gala event deserved the appreciation of the entire Jewish community. Co-chair Bill Miller said, “In planning this event, we set what we thought was a lofty goal of 400 people. Well, that was ‘blown out of the water’ with an incredible 700 people. What a testament to our honorees.” Miller’s co-chairs were his wife, Kim, along with Marilyn Moore and Lee Wielansky.

“It’s an honor to pay tribute to the supporting families to publicly say how much they’ve done,” said Miller. “Because of all these families have done for the Jewish and non-Jewish communities, we hope the entire St. Louis community will join us in thanking them.”

Kim Miller agreed. “The meaning of this wonderful event is to celebrate and honor these couples who have the unique pleasure of knowing that the world is a better place because they were here. They personify the mitzvah of tikkun olam-to repair the world,” she said.

Each supporting foundation supports projects and programs that meet Federation’s mission, which is to mobilize resources needed to preserve and enhance Jewish life in St. Louis, in Israel and around the world.

Co-chair Lee Wielensky added, “The families we honor this evening send a special message-that it is important not only to be successful, but to share that success with the community. This gives our community a chance to show these families how much their generosity and involvement with Jewish Federation is appreciated. This is also an evening that offers the ‘sizzle’ as a world class celebration with the talents of the musical genius, the Grammy- nominated Michael Feinstein.”

The scope of the programs, services and innovative projects made possible through the three family foundations was explained in a video, which featured remarks by Barry Rosenberg, JFed executive vice president as well as members of the boards of the foundations and the honorees themselves.

Missouri Governor Jay Nixon extended warm greetings to the large audience and paid tribute to the honored families. He recalled a trip to Israel three years ago, in which Tom Green and Michael Staenberg participated. Nixon praised each of the honorees for their generosity and expressed “deep admiration for the State of Israel, a place where King David’s Tomb and a university founded by Albert Einstein exist in the same small nation.” Also in attendance were St. Louis Mayor Francis Slay and St. Louis County Executive Charlie Dooley, among other local and state officials.

Among the highlights of the three family support foundations are:

— The Staenberg Family Foundation was set up in 2005 by Michael and Carol Staenberg through an initial donation of $5 million in assets, as the second supporting foundation of the Jewish Federation. Michael Staenberg is president of THF Realty. Current foundation assets total $13 million in the form of longterm partnerships in real estate projects. The foundation has awarded annually $1 million in grants. The Staenbergs chose to set up the foundation in this manner because they “believe the Federation’s mission is consistent with their family values as Jews.”

Some of the agencies and projects currently supported by the Staenberg Foundation include: American Technion Society; Anti- Defamation League; Birthright Israel; College Bound; Contemporary Art Museum, Holocaust Museum and Learning Center; Jewish Community Center; Jewish Federation of St. Louis; Lift for Life and the BAck to School Store of the St. Louis Section of the National Council of Jewish Women, among many others. Michael Staenberg has served as chairman of the JCC and is a member of the St. Louis Jewish Light Board of Trustees

— The Kranzberg Family Foundation was set up in 2007 by Ken and Nancy Kranzberg, who named as president their daughter Mary Ann Srenco. Ken Kranzberg is president of Tricorbraun. The foundation’s focus is outreach and engagement of next generation programs and initiatives that benefit the Jewish community of St. Louis. Each year, the Kranzbergs put in $50,000 which is distributed in grants to organzations that apply. The Kranzberg Family Foundation has supported such NextGen programs in the community as the B’nai Tzedek program’s main funder which is administered by the Central Agency for Jewish Education, the PJ Library Program, the Jewish Student Union, Next Dor, Nishmah-Banot Buddies, Lifeline Fund, Holocaust Museum, Young Friends Initiative, the St. Louis Jewish Light Teen Page, the Anti-Defamation League and many others.

Michael Newmark, a past president of the Jewish Federation who was featured in the video, said, “What an incredible evening for three incredible couples. Let us hope that they will inspire other families to follow their example and create family support foundations to assure a vital and strong future for our community.”