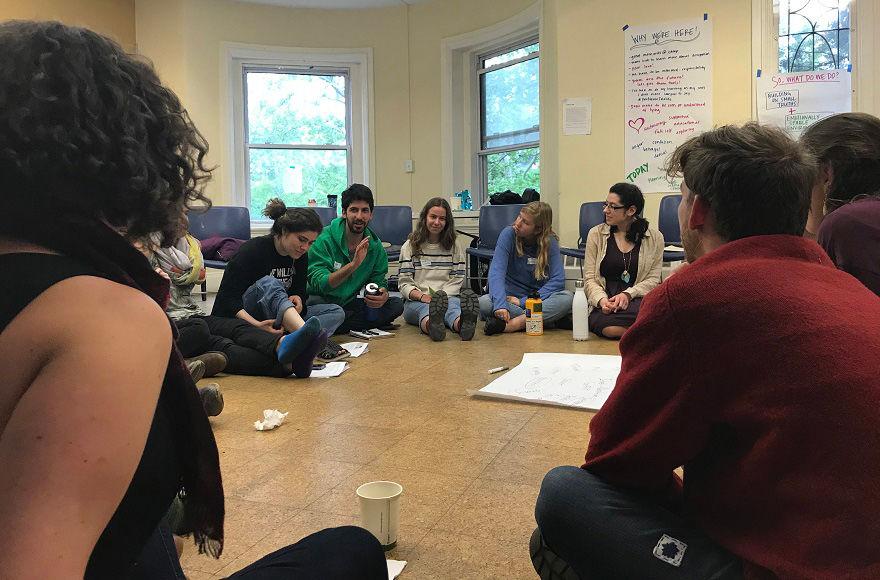 A participant speaks at an IfNotNow training session for camp counselors held in Boston in late May. The session attracted about a dozen counselors from eight Reform, Conservative and liberal Zionist camps.

Elana Kravitz spent much of her childhood and teen years at Camp Ramah in Wisconsin. She describes it as an amazing place where she formed lasting friendships.

Kravitz, 26, also gained an appreciation for the importance of social justice. Participants at Ramah, which is affiliated with the Conservative movement, were “allowed to be progressive on a lot of different issues,” she said.

But on Israel, Kravitz said, there was a “general sense” that “as an American Jew, there is some responsibility of without question supporting Israel in everything.”

She recalls events such as “IDF (Israel Defense Forces) Night,” when they celebrated the Israeli army without including the Palestinians’ perspective.

Now, with bachelor’s and master’s degrees in social work from Washington University, Kravitz has become disillusioned with Ramah’s approach to Israel.

After participating in training with IfNotNow, a Jewish group opposed to the occupation of the West Bank and Gaza Strip that teaches about the Israeli and Palestinian narratives of the conflict, Kravitz and other like-minded camp alums met with Ramah’s national leadership in March to discuss the camp’s approach to Israel.

They thought they had reached an understanding that the camp would facilitate “thoughtful, difficult discussions about Israel, ones that acknowledge its complexity and make room for the Palestinian experience,” Kravitz and others who participated in IfNotNow wrote in an open letter published in The Forward.

Since then, Kravitz, who taught in Congregation B’nai Amoona’s religious school while a student in St. Louis, has joined a chorus of Ramah alums who have criticized camp leadership for backtracking on commitments they claim were made in the March meeting.

Young people have criticized other Jewish programs over their approach to the Israeli-Palestinian conflict. Dozens of current and former participants in Union for Reform Judaism programs signed an open letter to that groupcalling on it to “end our community’s support for the occupation” of Palestinian territories.

These disagreements are the latest examples of millennials on the left pushing Jewish organizations such as URJ, Ramah and campus Hillel centers to change or risk losing support.

“I think there is a way to cultivate a deep connection to Israel in campers while also helping them see a fuller picture of what’s happening, and to think about how we can create a more sustainable future for Jews and Palestinians,” said Kravitz, who works in a teen pregnancy prevention program in New York.

After the Jewish Telegraphic Agency (JTA) published a story about the IfNotNow training for Ramah counselors,the camp’s national leadership released a statement declaring that they “are proud that Zionism is a central part of our core mission, as we nurture within our campers and staff members a deep and enduring love for Israel. [A] wide variety of positions supporting Israel can be voiced and discussed. We do not, however, permit the sharing of anti-Israel educational messages at camp.”

Kravitz said she and the other alums who met with Ramah leaders were not trying to promote anti-Israel messages. Their intent, they state in the letter, was to push the camp to discuss the “realities of occupation and include Palestinian narratives.”

Zakai Rose, who graduated from Whitfield School and will attend Washington University in the fall, has been a camper and counselor at Ramah for five years and disagrees with the criticism from the IfNotNow participants. He says Ramah has “Zionist ideals built into pretty much everything we do.”

“That’s not to say that we don’t have realistic conversations about things Israel does right and wrong,” said Rose. During Ramah staff training, he said, they discussed the Israeli-Palestinian conflict “from all sides” and “common goals and differences” between Israelis and Palestinians.

His younger sister, Ellior, said a counselor, who is in college, discussed the boycott, divestment and sanctions (BDS) movement against Israel on her campus and how “it was really hard for her there” as a supporter of Israel.

“We also heard how people who supported BDS were feeling on her campus and how she reacted to that,” said Ellior Rose, who will be in ninth grade.

Tasha Kaminsky, 30,who has worked for both the local Anti-Defamation League chapter and the Conservative synagogue Kol Rinah, attended a Ramah camp in Georgia, where she lived with Israeli campers and counselors. She learned Hebrew at Ramah.

“There were all kinds of education, from cultural education to language to history, and it was an amazing experience and a time where I grew a deep affinity for Israel,” Kaminsky said.

She has not participated in IfNotNow programming but said that while in graduate school at Brandeis University, she learned about the history of Israel and its nuclear policy, and it changed her perspective on the country.

“In order for me to be able to advance in a field that I thought I wanted to pursue, which was understanding nuclear policy so I could protect Israel from Iranian aggression, I learned from fellow Jews and Israelis that I had been taught a very skewed narrative,” said Kaminsky.

She supports IfNotNow’s efforts to bring an “evolution to the education that Ramah offers regarding Israel.”

She added, the Ramah alumni “are being the people that Ramah raised us to be.”