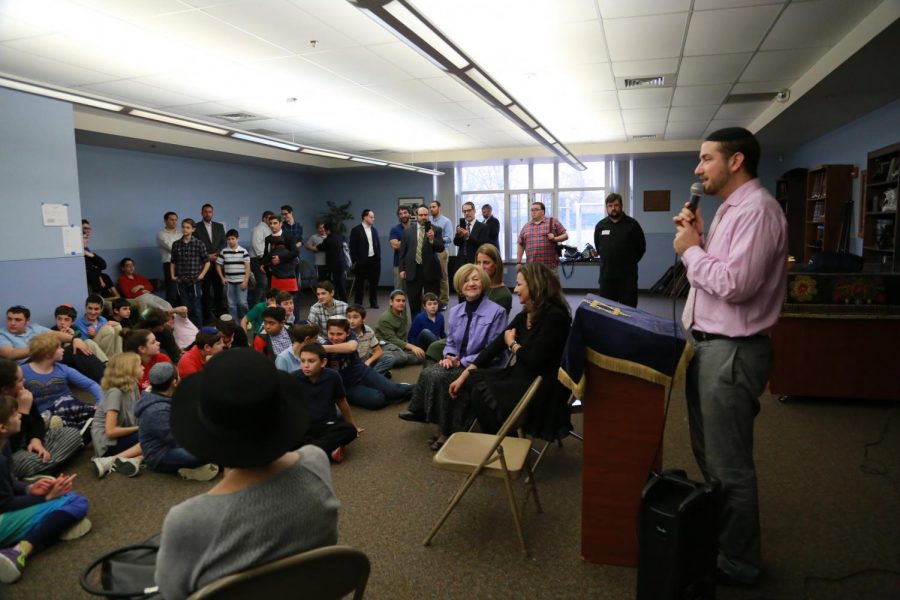 Rabbi Yaakov Green, head of school at Epstein Hebrew Academy, speaks to students during the Jewish Student Union Torah of Unity Celebration in December 2017 with students of Epstein and Yeshivat Kadimah High School. Green is leaving Epstein at the end of the 2018-2019 school year to join a Jewish day school in Dallas.

H.F. Epstein Hebrew Academy and Yeshivat Kadimah High School announced last week that they would merge to form one school and move from the Olivette building they share to a new space in University City.

Leaders of Epstein, an early childhood, elementary and middle school, and Kadimah, a high school, started merger discussions about a year ago, according to Melanie Winograd, Epstein board president.

The Epstein board also announced that Rabbi Yaakov Green, head of school, will be leaving the position after five years to join a Jewish day school in Dallas.

The merger and move, Winograd said, will allow the schools to share teacher resources and staff.

Epstein put its building and eight-acre property, at 1138 N. Warson Road, up for sale last summer. The merged school, with about 130 students, will not need that much space, Winograd said.

“As the demand for redevelopment sites is strong in this area, we have decided to be proactive and solicit bids to allow us the opportunity to relocate to a right-sized building for our current needs,” Winograd stated in an email after the listing.

The school is finalizing the sale of its property and purchase of a new building; Winograd declined to share the buyer or the school’s new location.

Green will be stepping into a similar situation in Texas. There, two Modern Orthodox co-ed schools, Yavneh Academy and Akiba Academy, are merging to form a preschool through 12th grade institution next year.

Epstein will hire an interim campus rabbi as it searches over the next year for a new head of school.

Winograd, who lives across the street from Green, also described his departure as bittersweet because it’s a loss for the school but a great opportunity for him.

“Rabbi Green and his administrative team over the last five years have really made academic strides at the school, and I think that is really important and impressive to say,” said Winograd. “Everything has been transformed and improved dramatically and it’s exciting to see that progress and that momentum. I’m excited to see that continuation for years to come.”