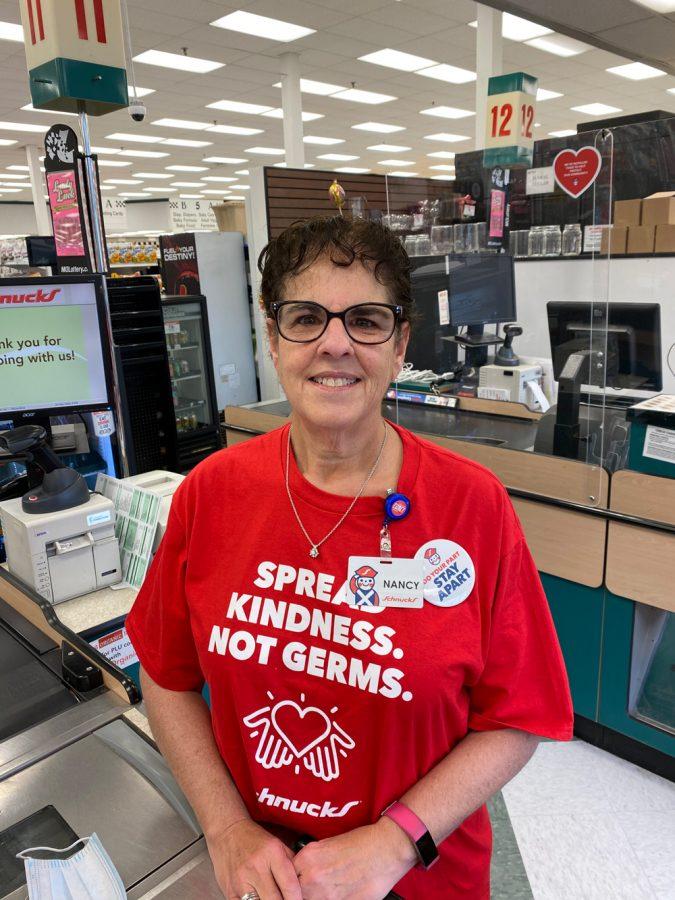 Nancy Dubman is a checker at the Schnucks grocery store near Olive Boulevard and Mason Road.

Nancy Dubman started working as a checker at the Schnucks grocery store near Olive Boulevard and Mason Road in west St. Louis County about a year and a half ago.

“I absolutely love it,” she said.

Two months of working during the pandemic hasn’t changed that.

Dubman has to wear a face mask for her eight-hour shift. She has to sanitize the keypad after each customer. She regularly cleans the belt on which customers place their groceries.

She wishes that the minority of customers who don’t wear face masks would wear them.

“Some people still aren’t taking it seriously, but I think you’re going to find that anywhere,” said Dubman, 62, who belongs to United Hebrew Congregation.

Despite not having that wish fulfilled, Dubman says that otherwise, 99% of her customers “are very pleasant.”

“When they say, ‘Thank you, we really appreciate you being here,’ I say, I’m thankful I still have my job,” said Dubman, who spent 12 years working for the Central Agency for Jewish Education and the Center for Jewish Learning.

Customers still frequently ask where the toilet paper went. When they show up at her line with some, Dubman jokes, “Oh, my God. You won the lottery today.”

Like many grocery stores, Schnucks has a rewards system, so a customer’s name appears on Dubman’s computer, and she now knows many of them by name.

“You build a rapport with them, and they know me, and before all of this social distancing and our new line setup, I would say they would stand in my line to come to me,” said Dubman, who has two children and two grandchildren.

As to the few customers who are rude, “I have been in many offices where you have to be there all day with that rude person. At [Schnucks], after I check them out, they’re gone. It’s over and done with. Goodbye,” she said, laughing.

The customers who seek out Dubman likely do so because of her disposition, which is one of toilet paper roll half full.

“I’m just more of a positive person,” she said. “I’m not a negative person. I’m a happy person. I have always been that way. I don’t let the bad things spoil my attitude.”