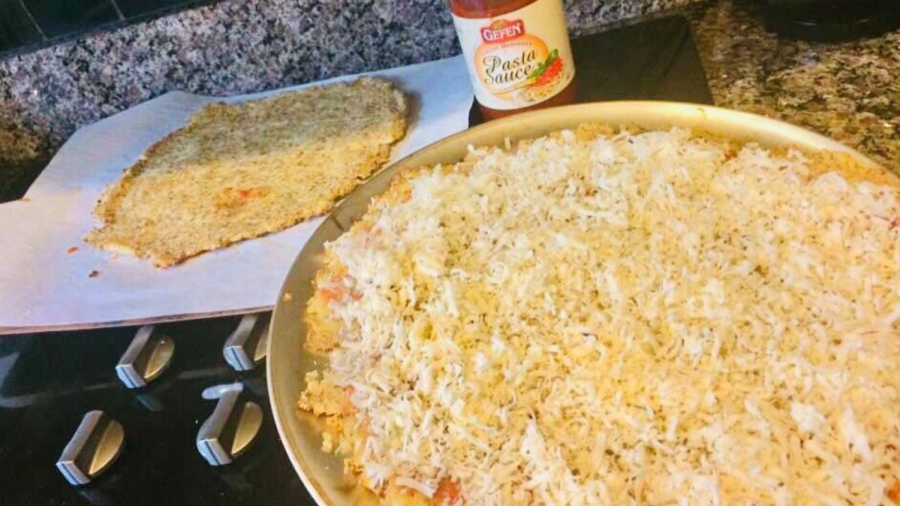 By Cheryl Baehr, Special to the Jewish Light

Chef AJ Moll could not help but be struck by the pizza recipe that came across the screen one day when he was watching a documentary with his wife. The show, “Fat Head,” chronicled the journey of a keto diet advocate who claimed that sugar and carbohydrates –- not fat –- was making people gain weight. In helping people learn how to eat a keto diet, the film’s protagonist shared a recipe for a low-carb pizza. That’s when Moll noticed something.

“I told my wife, ‘Wait. This recipe is a Passover recipe,” Moll recalls. “This means we can have pizza for Passover!”

The recipe in question is for Fat Head Pizza Crust, an almond flour-free pizza dough that Moll, 42, swears will satisfy the craving for traditional pizza that he and everyone he knows get during Passover. Made from almond flour, mozzarella, cream cheese, egg and herbs, the dough is Passover-friendly when the right ingredients are sourced, Moll says. Plus, it’s easy to make, even for people without his culinary background.

“It’s not hard,” insists Moll, who is the executive chef at Saul Mirowitz Jewish Community School. “My 10-year-old daughter can do this. Part of the process involves using a microwave, so it’s that easy.”

Moll, who belongs to both Tpheris Israel Chevra Kadisha (TICK) and Congregation B’nai Amoona, relies upon a recipe from the food blog, Recipe Diaries. Though the site gives would-be cooks what they need for a successful endeavor, Moll emphasizes the importance of using parchment paper – not wax paper – when you are getting ready to bake the crust after the dough has been made.

From there, he encourages people to get creative in adorning their pie with whatever toppings spark their interest. The Moll family is partial to a Passover-friendly tomato sauce that they spread over the crust, and they’ve found that the perfect amount of cheese is two cups. Other than that, they load their pizzas up with veggies, such as sliced mushroom, onions, fresh basil, peppers, and olives. He insists the only way you’ll go wrong is if you try to eat too many pieces.

“This tastes really good, but I can tell you it’s very filling because there is so much fat from the almond flour and cheese,” Moll says. “Maybe you can eat a whole traditional pizza if no one is looking, but with this one, you can only get through one-and-a-half pieces before you’re full.

Put Mozzarella and cream cheese in a medium bowl microwave-safe bowl. Microwave for 1 min, stir and then another 30 sec, stir.
Stir in egg and almond flour until the dough is combined.
Place a sheet of parchment paper on a baking sheet or pizza pan. Wet hands and spread the dough thin on parchment paper. It should spread evenly with dough-like consistency.
Poke rows of holes with a fork to avoid bubbles.
Put in 425-degree oven
After 8 minutes check the crust and poke holes if there are bubbles.
Add desired pizza toppings.
Continue cooking for a total of 12 to 14 minutes or until slightly brown and golden.