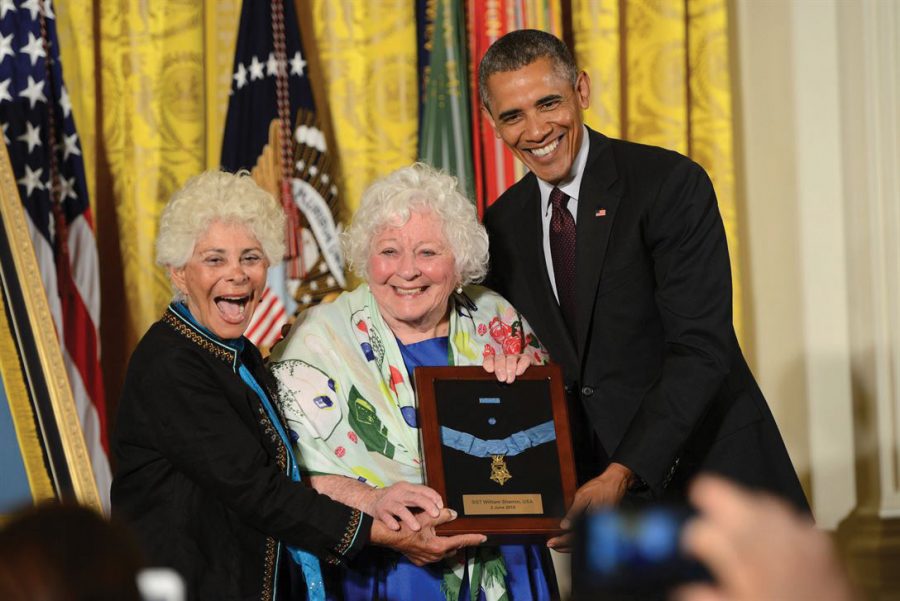 President Barack Obama presents Ina Bass, left, and Elsie Shemin-Roth with the Medal of Honor for their father, Army Sgt. William Shemin, at the White House in 2015. Sgt. Shemin was recognized for risking his life during World War I to save the lives of others.

The daughter of a Jewish American who earned a posthumous Medal of Honor for his actions in World War I will share her father’s story at two upcoming events, including a virtual discussion tonight held by the National WWI Museum and Memorial in Kansas City.

Sgt. William Shemin demonstrated “extraordinary heroism and selflessness, above and beyond the call of duty,” in combat from Aug. 7 to  Aug. 9, 1918, according to his Medal of Honor citation.

“Sergeant Shemin, upon three different occasions, left cover and crossed an open space of 150 yards, repeatedly exposing himself to heavy machine-gun and rifle fire, to rescue wounded,” the citation notes. “After officers and senior noncommissioned officers had become casualties, Sergeant Shemin took command of the platoon and displayed great initiative under fire until wounded on August 9.”

In 1919, Shemin received the Distinguished Service Cross — the nation’s second-highest military honor for heroism in combat — for his actions.

In 2015, Shemin’s daughter, Elsie Shemin-Roth of Webster Groves, told the Jewish Light that the reason her father had been denied the Medal of Honor was because of anti-Semitism.

“I remember sitting on the front porch when I was 12-years-old with my dad and his Army buddy, Jim Pritchard, a dear family friend who was in the trenches with my father,”  Shemin-Roth said. “Jim said to me, ‘Elsie, you’re old enough to know that your father never got the medal he deserved because he was a Jew.’ I was horrified. I ran to my dad and said, ‘Can this be true?’ He said anti-Semitism and discrimination were a way of life back then in the Army. But he never dwelled on it.”

William Shemin died in 1973. Three decades later, Shemin-Roth read about a new review process for veterans from World War II, the Korean War and the Vietnam War who may have been denied the Medal of Honor because of religion or race. Shemin-Roth wondered why the same process would not include WWI veterans.

That led Shemin-Roth, now 91, to work for years to expand the review process and have her father’s case revisited.

Her efforts resulted in the William Shemin Jewish World War I Veterans Act, part of legislation signed by President Barack Obama in 2011.

In June 2015, Shemin-Roth, her sister, Ida Shemin, and other family members traveled to Washington. In a ceremony at the White House, Obama presented Shemin-Roth the posthumous Medal of Honor for her father.

Since then, Sgt. Shemin’s story has been shared in museum exhibits and a book about Medal of Honor winners. A school was named after Shemin in his hometown of Bayonne, N.J. And Shemin-Roth has shared her father’s story with a variety of groups, including cadets at West Point.

Tonight, Shemin-Roth will be one of three daughters of Medal of Honor winners — two from WWI and another from the Korean War — speaking at 7 p.m. during a virtual discussion held via Zoom by the National WWI Museum and Memorial in Kansas City. The event, taking place on National Medal of Honor Day, is free and open to the public, but RSVPs are required to participate. Click here to register.

On Friday, April 16, Shemin’s story will be shared during a virtual National WWI Memorial’s First Colors Ceremony, at 9 a.m. (CST), which will will “celebrate the Inaugural Raising of the Flag of the United States of America over the newly constructed National World War I Memorial site in Washington, DC,” according to its website. The online live broadcast event is free and open to the public, but registration is required at https://firstcolors.worldwar1centennial.org.