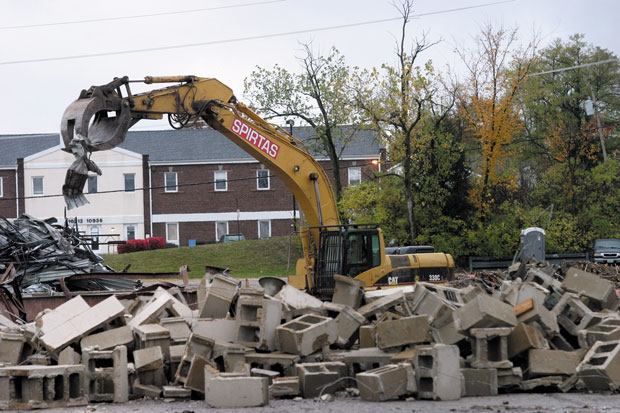 Covenant House has requested a zoning change to a tract of land formerly housing the old AMF Strike ’n Spare Lanes, a move which indicates the institution’s potential interest in its future use.

“We’re looking at what could be a possibility,” said Joan Denison, executive director of the senior housing complex. “The first thing we have to understand is if that land is potentially available so it is a first step.”

Owned by the Jewish Community Center, the six-acre plot has been vacant since the bowling facility’s departure in 2011. The proposed zoning adjustment would convert a C-2 shopping district designation to R-8 residential use for nearly three acres of the tract lying furthest away from Schuetz Road. A public hearing on the issue has been set by St. Louis County for Monday, Nov. 18. The county sent notices out via postcard to nearby residents.

Denison said that Covenant’s interest lies only in the “back portion” of the former bowling alley site.

“The J would retain ownership of the portion that fronts onto Schuetz Road,” she said.

Denison confirmed that she will be attending the meeting. She said she had not yet spoken to area residents about their feelings.

“At this time, we need to understand if there is a possibility to rezone it. If there is not, then that’s a moot point so we’re just trying to understand if the county would do that,” she said. “We’re really just investigating options for how we can continue to provide quality affordable senior housing in the future.”

Lynn Wittels, president and CEO of the JCC, said that while the JCC took no position on the rezoning, it would likely send a representative to the meeting though Wittels herself would not be attending.

She said that the JCC’s intent is to eventually sell the real estate regardless of the hearing’s outcome.

“We would love to be in partnership with Covenant House if this works out for them,” she said. “Otherwise, we’ll find another buyer for the land.”

Wittels said the tract has been a part of the JCC’s campus holdings since its inception.

“I know that that land was provided to the J by Mr. Millstone and it was really his intent and desire to make sure that the agency always could address the needs that aren’t quite so glamorous,” she said. “Typically, they are needs around the facilities and the bowling alley provided revenue that was then allocated to a fund to take care of facility needs. It was terrific. For 40 years, we were able to benefit from that. It really showed a tremendous amount of forethought and insight on the part of Mr. Millstone.”

The alley was demolished after AMF’s departure.

“We really did that because we felt that it made a more attractive plot of land for whatever we ended up doing with that parcel,” said Wittels. “It would prevent the buyers from having to make that investment.”

In response to a request for comment, Susan Goen, communications manager of the Jewish Federation, released a statement on the proposal via email.

“Federation knows that a variety of opportunities are being explored for the bowling alley property,” it read. “We support Covenant/CHAI’s mission of providing quality affordable housing for seniors in a caring environment. Moreover, we support the productive use of the entire I. E. Millstone Jewish Community Campus in a way that will continue to benefit our Jewish Community.”

If a land deal were to eventually occur, it would not be the JCC’s first. In 2007, the institution sold an unused 52-acre plot representing nearly half the campus in a $9.5 million arrangement with two home developers.

Established in 1973, Covenant House has three buildings at present with 434 apartments, according to its website.

The county’s hearing will be Monday, Nov. 18 at 7 p.m. in the Council Chambers on the first floor of 41 South Central Avenue in Clayton.