Could Jewish lineman protecting Brady in Super Bowl LV be the difference maker? 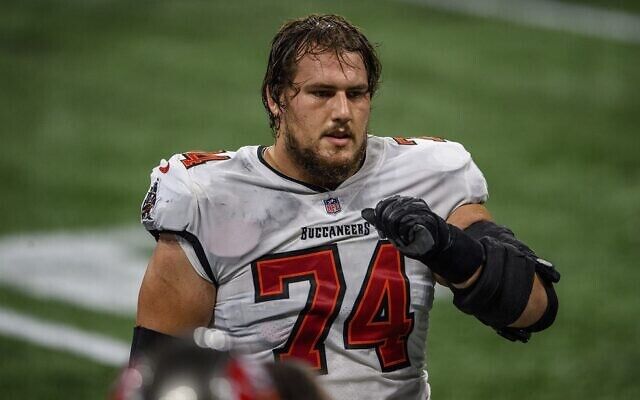 Tom Brady versus Patrick Mahomes. That is how the casual sports fan sees this upcoming Super Bowl match-up, and there’s nothing wrong with that.

At its origin, sports lure us in with big names and personalities. A showdown that defies fierce allegiance to the sports, the Kansas City Chiefs and Tampa Bay Buccaneers features one of the greatest quarterback face-offs of all time. Young versus old. Unlikely ageless arm versus the unstoppable kid wanting to make the Chiefs the new New England Patriots, minus the controversy. The next dynasty in the NFL.

This time, Brady has made it to the promised land with a new team. A man playing in his tenth Super Bowl doesn’t need a big introduction, but he does need a really big guy to protect his blind side, and for Brady, that big guy is Ali Marpet, a sixth-year pro for the Tampa Bay Buccaneers.

Marpet is one of the few Jewish players in the league, and had injury not put out Kansas City Chiefs Pro Bowl Tackle Mitchell Schwartz, we would have seen two big Jewish guys on the field.

Marpet, 27, who plays left guard, has been especially strong in protecting Brady, not allowing a sack of the iconic quarterback all season. In fact he has not allowed a sack of any quarterback since Week 6 of the 2019 season. Some have even called him the best guard in the NFL.

Marpet has been rated as one of the top offenseive guards in the NFL over the past six seasons, and is an offenseive team captain.

He is the son of a musician mother and fashion videographer father from New York’s suburban Westchester County who hosted Shabbat gatherings for family and friends.

He attended Hobart College, arriving unheralded at the school of some 2,400 students in upstate New York. At the Division III level, meaning the colleges do not award athletic scholarships and their players almost never reach the pros, Marpet grew to over 300 pounds and combined his athletic prowess and a strong work ethic to make himself into a bona fide NFL prospect. The Bucs picked him in the second round of the 2015 NFL Draft.

According to PFF on Twitter, Marpet has played 1,075 pass-blocking snaps without allowing a sack. The streak stretches back to last season, and Marpet shows no sign of stopping now.

It doesn’t seem to matter what age he is, whether or not his receivers are good, or if he has a good offensive line: Brady just doesn’t go away. A man I loved to bet against, even if I knew that money would be lost in the end. His comeback against the Seattle Seahawks a few years ago in the fourth quarter stands as some of his best work. The rest of the Bucs roster is solid, but Brady is the one you will have to stop. The biggest showdown Sunday could be Brady versus Steve Spagnuolo’s defense. Will the third time through Spags’ fortress be the charm? I have my doubts there.

Mahomes also knows something about fourth quarter comebacks. No doubt Tampa Bay has gone over the last 15 minutes of last year’s big game quite a few times. A man fit to be king, if not wearing the crown already, Mahomes is quickly turning Kansas City into a dynasty in the making. After taking a big hit and collecting a rough concussion against Cleveland on Jan. 17, the reigning Super Bowl LIV made easy work out of Buffalo, throwing for three touchdowns and connecting on 29 passes in 38 attempts. In other words, I don’t think he has a headache anymore.

Here’s the thing. I don’t watch much NFL action these days. That’s the biggest reason this article isn’t decked out in NFL Sunday hyper-analysis discussion wrapping paper. I’ll leave that to the pros. But why don’t I watch, you ask? Part of it is time-related, and the other half is a slowly rotting hatred of the people who run and operate inside the business. Interest was lost. That’s why I will skip the stats and defensive rankings of each team, and just be real with you.

The casual sports fan watches this game for two reasons: the commercials and the quarterbacks. That’s not a shot at the other 100+ players on the respective rosters (both teams are stacked). Can Mahomes start a new dynasty by taking down the last quarterback to do it? The Chiefs’ leader in the pocket has become a country-wide sensation at an astronomical rate, and it’s a testament to his thrilling play on the field (he’s the polar opposite of boring) and his attitude and leadership. Those last two traits sing louder to parents than kids, who are merely overwhelmed by this guy’s physical gifts.

Rest assured, you have two players who don’t think of the clock as an obstruction, but only 60 minutes to spread out their heroics. Right when people thought the San Francisco 49ers had shut Mahomes down, he came back. St. Louis football fans know all too well what Brady can do if you give him enough time. So do Green Bay Packers and New Orleans Saints fans. He’s done it too many times to forget or write off his chances.

Brady vs. Mahomes defies fandom levels. It appeals to a mass audience, the sports fans who just like a good game. Hard to miss, this one will go down to the wire. There will be interceptions at the worst time. Sacks out of nowhere. Field goals that make-or-break quarters. You will need more beers than you will dips.

Who do I want to win? The Chiefs. Like it or not, Kansas City is Missouri’s NFL team now. Just get on the wagon.

Who will win? The Chiefs. 30-27 in overtime. Travis Kelce wins MVP. Every nail in KC and Tampa is bitten off.

That’s all I got. Enjoy the game on Sunday. Whoever is making smoked wings and corned beef sliders, I’ll be right over.